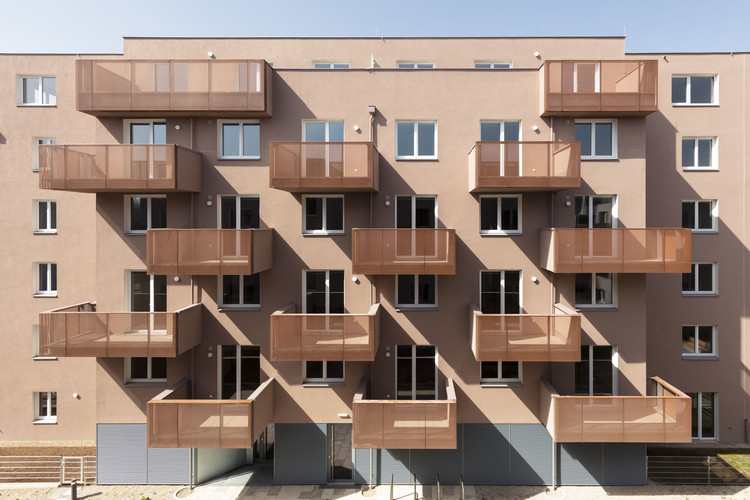 Text description provided by the architects. SCH | an den Schichtgründen is low-priced housing with a whiff of magic. The finely detailed construction of the rust-colored, perforated aluminum balustrades sets off the carefully layered and vibrantly cadenced forms which lend a unique allure to this high-density, mid-rise housing estate.

The balustrades frame the airy and attractive apartments and mediate between the privacy of the individual apartment and the spaces of the estate and the city beyond. The buildings' powerfully sculptural facades structure 130m long building fronts into attractive and well-proportioned segments and establish clear and legible street addresses, imparting the estate a distinctive urban identity. The Schichtgründe are a brownfield urban redevelopment zone in Vienna’s historically industrial district of Floridsdorf.

The chemical work of the Georg Schicht family was dismantled in 2014; in its stead a new-built, high density, largely residential district for 2000 inhabitants has been built. The 200 affordably priced apartments of SCH form the western edge of this urban neighborhood, facing upon the Hans-Czermak-Gasse and the woods and fields beyond it.

The characteristics of this rather singular site governed the project’s conception and design. Although the woods and fields are part of Vienna's protected Green Belt and will offer the estate's residents a magnificent and permanent panoramic view, Vienna's long-term development plans call for the Hans-Czermak-Gasse to be built-out into a major North-South traffic axis in 10-20 years. This means that, although the situation is presently almost bucolically quiet, it will be transformed by a major vehicular artery in the foreseeable future. Schichtgründe’s masterplan conceived this edge as a closed street front, which shields the rest of the settlement from traffic noise.

SCH's parcel was then composed into two layers. The street-front layer is a single thin and articulated block, six stories high in the south, seven in the north. The stairwells are located street side, creating legible entry zones. The living rooms and kitchens face west to the street and towards the view; the bedrooms face east onto a sheltered courtyard. The garden-side layer, to the east of this court, is composed of three compact, five-story blocks.

The green space of the courtyard flows between these open blocks and connects it to a green garden and a pedestrian zone to the east. Due to this arrangement, all apartments face onto green and attractive spaces with interesting views - despite the density of the quarter as a whole. For affordably priced apartments, the individual units are unusually spacious and airy. Many are quite loft-like in character. Special attention has been given to the stairwells and common zones; these are generously dimensioned, finely detailed and full of light. Rich colour enhances the architecture.

The rust-red, metallic-powder coatings of the balustrades accent the dusty rose stucco of the main facades. White window frames and reveals enliven the fronts. The blue, metallic-glazed render of the entry zones is enclosed by precast walls and canopies whose white-cement concrete surfaces are finely sandblasted for tactile effect. The lively yet harmonious color scheme reinforces and accentuates the architectural composition. 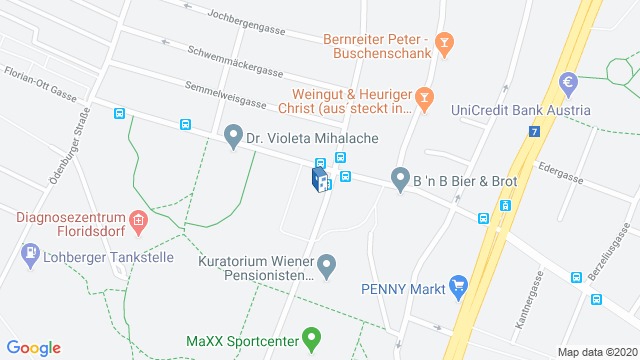 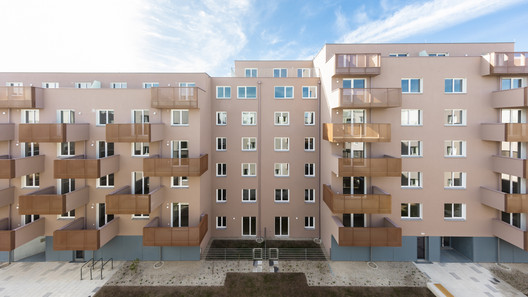