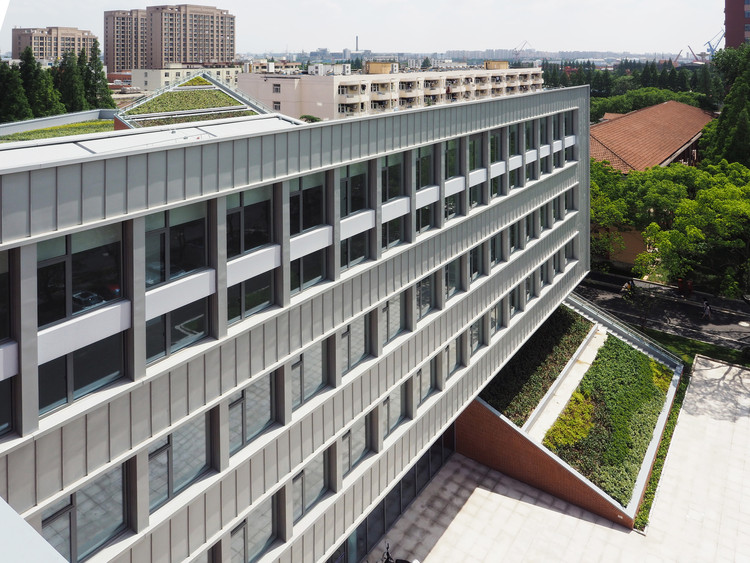 Text description provided by the architects. Located on the north side of the main entrance of the South campus of University of Shanghai for Science and Technology, the International Cooperative Education Building was originally a brick and concrete library from the 1960s, which was demolished due to disrepair. The library on the original site, together with the surrounding buildings, encloses a symmetrical spatial sequence of rewinding and rewinding on the east-west axis. However, as the Zhoujiazui Road tunnel planned by Shanghai city is inclined to cross the campus, the newly built ICEB must avoid the tunnel control line, thus breaking the original parallel and symmetrical spatial pattern. At the same time, limited and irregular land use, sunshine and vision requirements of residents in the north side, height limitation and other factors are in conflict with the construction area desired by the school, which further makes the design fall into a dilemma between respecting the spatial texture and making full use of the land.

The idea was to retain the planar contours of the original library on the site as a memory of the place, while also serving as a plaza for the new building. New construction grew from here, to the north oblique upward growth, on the one hand, the square space on the vision toward the north, on the other hand, echo the top form of the building east, then the buliding upward spiral extension to the west, and on the direction of texture consistent with campus embed a suspension to extend, and respond to the whole of the campus space relationships.

The main entrance of the building is located below the suspension, and enters the building from the wide memory square. A corridor divides the space into two parts, the vestibule and the atrium. forming unconventional perspective experience according to the non-parallel relationship in the triangular atrium formed by the boundary of the site. On the east side, the second and third floors make use of the spatial characteristics of the inclined roof to design the public study room of the duplex. The French Windows fully introduce the outdoor green meaning into the interior, and the roof sets skylight to bring comfortable natural light to the deep room.

The outdoor sloping roof draws people's eyes from the horizontal direction to the sky, greatly reducing the pressure of the building volume on the square, and makes people have unlimited imagination space. The metal suspension protrudes horizontally, which is full of the sense of future. It is in contrast with the inherent red brick outer wall of The University of Science and Technology, and it is also a metaphor for the collision and cooperation between different cultures in the world. 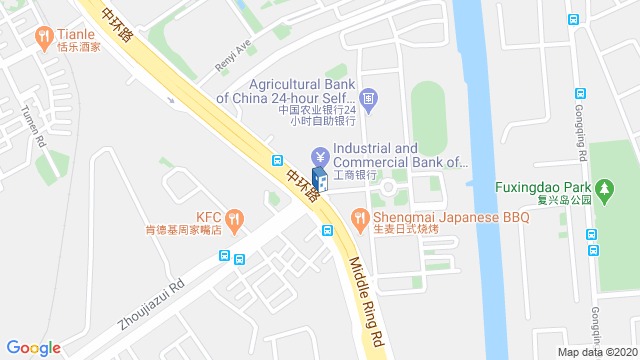 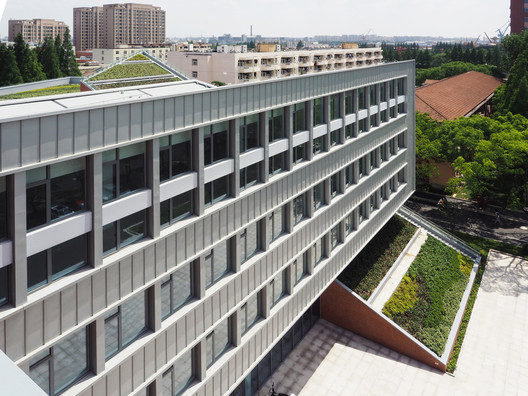