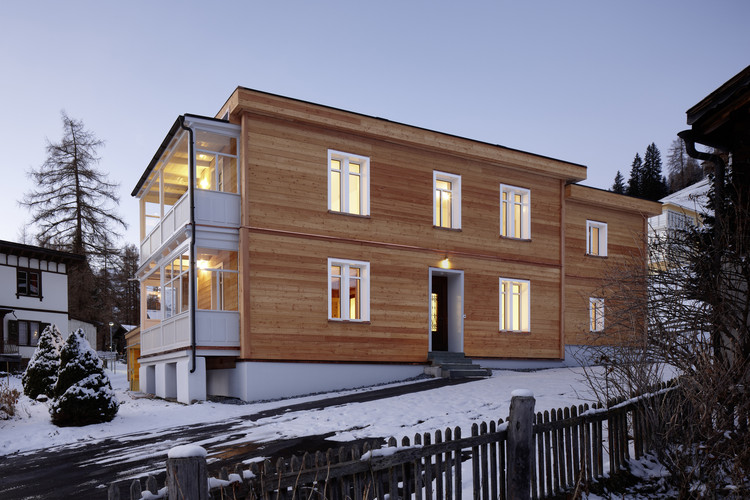 Text description provided by the architects. The building is an important witness to the history of development within the landscape of Davos, especially for Clavadel. When the Walsers came to the valley at the time, they founded the first settlement and thus brought their way of building with them, the solid-timber log house. Much later, the Davos landscape, with its guesthouses, spa businesses, and, lastly, sanatoriums, took a further step in its development as a settlement, upon which the present-day city of Davos is founded.

Due to the excellent geographical location of Clavadel, slightly above Davos, the first spa businesses, and, later, the famous "Zürcher Heilstätte Clavadel" by architect Rudolf Gaberel, were built here early on, in addition to the simple farmhouses. Simple farmhouses in their catchment area were in part transformed, adapted to the times, and used as accommodation for the relatives of spa guests.

This was also the case with the building we converted, which unites the entire history of development under one roof. The oldest part of the house dates back to a Walser farmhouse. As the spas and sanatoriums developed, this was transformed in the middle of the 19th century, and another storey was built with solid, filled-in half-timbering. The floor heights, the roof shape, the interior, and its external appearance from that time were adapted accordingly. The south-facing balcony element and the flat roof are the most striking features. Inside, these are mainly the wood paneling and the stucco elements on the ceiling. Previously, work was mostly done on the inside, with layers placed upon layer. The whole building was in very bad shape.

Together with the client, we decided to renovate the building and refrain from building new construction, as the building contributes to the identity of Clavadel as a witness of the past, not only in terms of its scale from an urban-planning perspective, but also with respect to its appearance together with the surrounding buildings. This piece of history was thus able to be preserved and yet still be adapted to modern-day requirements, as was already once the case in around 1850. Historical photos were also helpful for getting a feel for the history of the building and its surroundings.

The main task was to bring the original qualities of the building back to light and to remove all layers that had been deposited over time. In some cases, up to 4 superposed floor coverings had to be removed until you got to the original wooden floor planks. These were then sanded down and oiled.

In order to meet today's requirements for building shells, the floors, ceilings, roofs, and windows had to be insulated or replaced. There was the possibility of insulating on the inside or outside. We opted for a newly insulated facade on the outside, because the timber formwork was painted and could not be saved. Furthermore, the value of the wooden panels inside the building was estimated to be more valuable. The difficulties of the structural physics when insulating a multi-storey building on the inside also supported this decision. The new facade was developed based on the old one, so as not to change the character of the building too substantially.

Together with the client, we have succeeded in this renovation project in once again uncovering the original qualities of the house. This has strengthened the identity of the place and enabled a piece of history to be preserved. 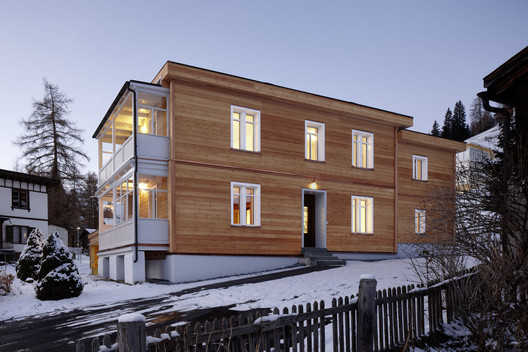