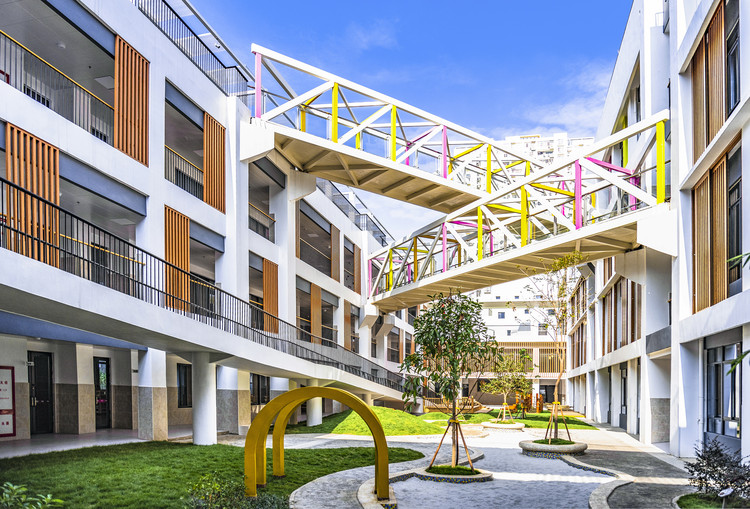 Text description provided by the architects. The Second Kindergarten of Guangxi Government is located in an alley between Minzhu Road and Jianzheng Road in Nanning. It is surrounded by residential buildings and a primary school. The base before the kindergarten established was composed of old buildings, which could not meet the requirements of the scale and durability for a developing school. After detailed research, the project adopted the method of overall demolition and reconstructing on the original site.

The unfavorable orientation with the rectangular building base, long from east to west and short from north to south, , the need to accommodate 18 classes on a limited site and the requirement of kindergarten sunshine, all brought challenges to the design. The design is based on children's daily behavior, hoping to create a rich and diverse communication space for children, and create a place where they can run and play inside. In addition, it has also become a design goal to build up a building that is friendly to the surrounding environment and some public spaces inside be used by residents of surrounding communities.

Through a thorough study of site characteristics, sunlight, and ventilation, the design should adopt a closed layout according to local conditions. East-west-oriented classroom activity rooms can meet the requirements of the number of classes and sunshine. Considering the heat of the sub-tropical climate, the building's façade is equipped with horizontal sun visors, fixed sun grills, and sun-shading sliding shutters.

Go through the open main entrance and enter the two-story lobby, where you can see the inner courtyard. It has excellent visibility and air circulation. Three conical skylights on the lobby ceiling bring soft light to the lobby. This is also a place for kindergarten meetings and performances. The teacher's restaurant on the side of the hall connects the outdoor courtyard, which is also a space for daily communication between teachers and parents.

In order to create opportunities for children to communicate and talk, every two class activity units are grouped together to form a small shared space. The bathrooms next to each other are provided with interconnected passages, which can allow children of different classes and ages to enter each other's activity space and help children to communicate and grow. The outer corridor of the east unit is inlaid with a colorful box-shaped space where children can stay and communicate. The sliding shutters on the outside of the box, while shading, also bring vivid light and shadow to the facade and outer corridor of the building.

In order to provide children with space for running and crossing, two crossed steel structure overpasses are set up above the inner courtyard. Together with the ramp, they form a spatial change. Whenever the sun shines from the sky, the overpass leaves vivid light and shadow on the outer wall and the ground. Due to the limited space, in order to create more space for activities, the rooftop platform was fully utilized. The roof above the hall is shaped as a terrace for children to play, and three trapezoidal skylights like sculptures bring children playful fun. The exterior walls on both sides of the terrace, square windows of different sizes and free combination, bring active visual factors to the interior and exterior.

The roof of the west unit is an outdoor sports field, providing space for children to run and play. The staggered plexiglass covering the sports field also extends to the building's façade. They bring changes in light and shadow, blocking and filtering strong sunlight. The roof of the multi-purpose room on the northwest side is shaped as an outdoor performance, assembly, and play space, which can be provided for each class and surrounding residents to use. The roof of the east unit is mainly used as a green planting roof, a field for vegetable cultivation, and a grass field that can play football.

The building uses simple, bright, modern, subtropical design methods to shape the image of the kindergarten. On the premise of satisfying the function, strive to have a unique personality. The boundary wall of the site uses a white aluminum grille to form a simple and complete interface while satisfying the air flow. The bamboo inside the site passes through the gap between the grilles, forming vivid colors and contrasting light and shadow. The building hopes to create a pure atmosphere and form a new order in the surrounding messy environment. The freely arranged square windows on the white wall, the fixed sunshade shutters in the outer corridor, the lively colors and the crossover crossing, and the various event spaces in the interior, all give this kindergarten hidden in the alley a unique space Experience. 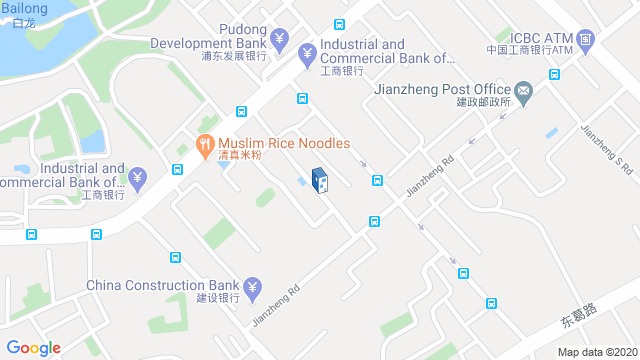 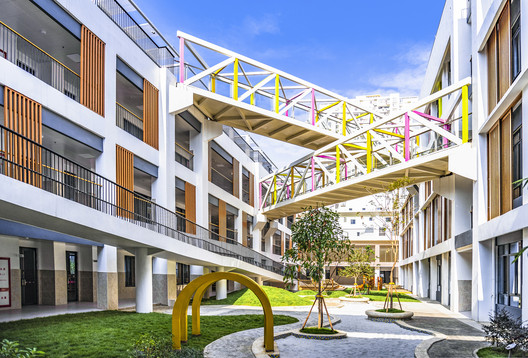