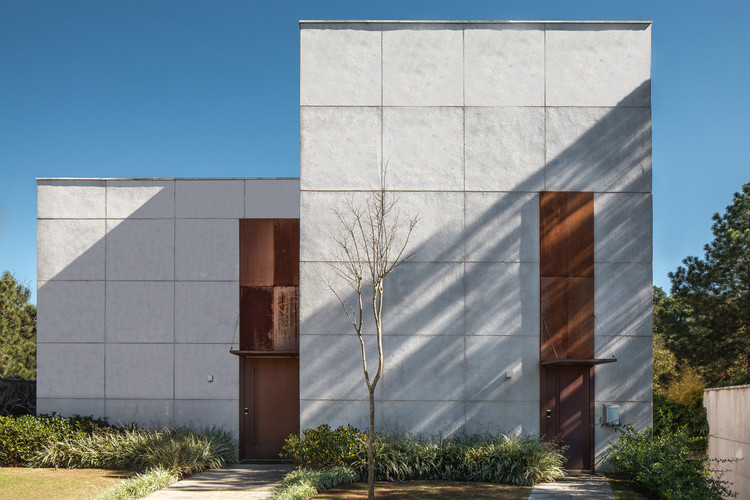 Text description provided by the architects. This 60 years old house has always remained in the same family and was occupied by different family configurations. In this new phase, the owners decided to make a major transformation so that in the coming years the residence would serve their uses more comfortably, becoming a meeting place for the whole family.

Two regions of the house were the center of the intervention. On one side, kitchen, pantry, storage and staff room maintained a traditional configuration that segregates each room. On the other side, the couple's suite was preceded by a large hall, leaving plenty of free space. At the same time, the bedroom shared space with a tight closet, leaving a small area for the bed and a small window facing the recess.

Observing these two fronts, the project sought to reorganize the kitchen area by integrating all rooms with the main hall of the house and expand the suite making it more comfortable. A principle that permeated the actions in all environments was the desire to open the house to its outdoor spaces, making the most of natural light and integrating the vegetation of the gardens with the internal space.

The demolition of all masonry in the kitchen wing made it possible to rethink its organization around a large central isle that is divided between a preparation area and a counter for quick meals. In the background, the sinks were concentrated, facing the new and large window. At each end of this new kitchen, a door leads to the backyard, laundry room and barbecue garden, organizing all flows along clear and direct axes.

The main room of the house assumed the function of living and social space, and not just a visits room. The largest wall in the room had its cladding removed so that the clay bricks were visible. In front of it, a large steel bookcase was designed to give support to the activities. The barbecue area and pizza oven have also been remodeled to establish a clearer relationship with the room and create more fluidity towards the pool.

With the intense demolition of this area, it was possible to explore a new composition of materials and harmonize colors and textures with the original style of the house. A new concrete slab floor unified all these spaces. The old aluminum windows were replaced by wood, the original pattern of the house. And the concrete structures that appeared in the demolition were left on display. In the bedroom, in addition to expanding the space with the new configuration, the major change was the new openings. The existing window was replaced by a larger one of the same model and a glass door was opened to allow the direct connection of the suite with the pool, through a wooden deck that created a balcony for the room. This transformation made possible to integrate this external area previously isolated from the daily life of the house.