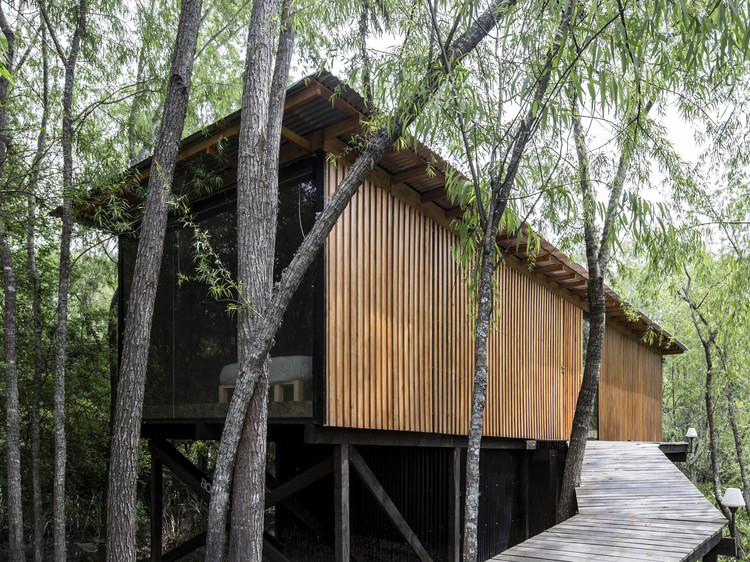 Text description provided by the architects. The house is developed in one of the most rugged areas in the vicinity of the urban centre of the highest population density in Argentina, the Buenos Aires delta. This first situation of opposites is a significant attraction of the location. In front of the site is the access channel and in the background an infinite humid willow forest. The soil continually changes, from water to earth.

The placement of the house is in a longitudinal direction to the plot, seeking to frame both situations and the landscape references of the constantly changing environment.

The volume is a wooden parallelepiped with opposite directions, the long faces are continuous with some intervention in the access and other more subtle semi-permeable ones, where it allows ventilation and maintains privacy, while the end faces turn towards the two referent views of the site.

The floor plan of the house is defined by two spaces separated by a loose nucleus of the perimeter allowing the continuous relationship between both situations of the site.

The stilt house is the construction that best adapts to changes in water levels. But given the difficulty of the location, due to its remoteness and the unpredictable presence or total absence of water, it was decided to be built with a system of opposites, on the one hand, the base was made in situ using the traditional method of the area, the wooden stilt house. Meanwhile, the house was prefabricated in a factory some 20km away, in an easily accessible area, which facilitated the control of the work and the progress of it, as it was not exposed to the weather.

The prefabrication was carried out with industrial wooden SIP-type panels, these 244 * 122 panels are the ones that modulate the entire house to avoid waste, they are panels that are easy to transport due to their weight and size, in addition to having good thermal insulation. In the factory, the complete construction of the house was carried out, then each panel was labelled before dismantling.