Save
Swamp Yankee Architect: Recycling as a Lifestyle
Share
Or
Copy

Whether we like it or not, every architect is a recycler.

The phrase “Swamp Yankee” is neither a diss nor a stereotype. Swamp Yankees lived in pre-20th-century New England. They were those poor folk who could only afford to live near water – where disease, vermin and bad weather regularly wrecked lives. Those folk never threw anything out that could be reused (someday). They bartered and they salvaged as a way of life. There was never waste (“waste not, want not”). Swamp Yankees made recycling a lifestyle. Sustainability was not a Green choice – it was the way they survived.

I am a Swamp Yankee Architect.

Where to Apply Recycled Materials in Architecture and Urbanism? 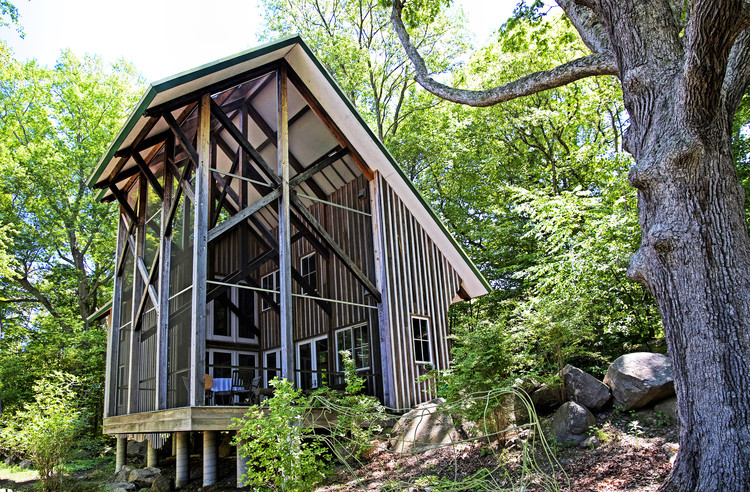 As architects, we chef a stew of existing realities mixed (and spiced) with our perspective to make architecture. Each site, client and community have a history that has nothing to do with who designs a project. Architects get to recycle those.

History is as universally present as gravity in architecture. Time is inevitably cast in the amber of our objects. Those objects can connect us to something that is more than history or aesthetics.

In Hartford, Connecticut, sixty panes of stained glass had replaced clear panes in an existing 1913 sunroom in a recent effort to create a chapel in the mansion-cum-office of the State Diocese of the Episcopal Church. Sponsored by dozens of individual donors, the panes of hand-painted icons and leaded glass were slipped into the sunroom’s muntin grids over a fifteen-year period.

The Diocese moved in 2013 to occupy a 19th-century ball bearing factory space, and they brought those panes with them to recreate sacred space in their new headquarters. The design our office created attempts to redefine these panes as points of memory, history and inspiration, creating new meaning for old icons, organized in their original "Epoch's" in each of five new movable partitions of salvaged wood.

Every renovation confronts a recycled place. You can either attempt a “Yin” of New, set in open contradistinction to the “Yang” of Old, or you can recycle the elements encountered to reinvent what exists to create a new reality. In Guilford, Connecticut a stair from 1950 and a column from an unknown era wrecked the living space of a Cape built in the early 19th century.

Our office recycled all the parts of the existing stair and the column to make space without expanding the home. The removed stair stringers became ornament. New steel became a frame to save the old, now non-functioning beam, which was set to the relocated, recycled column. All the old wood slab treads were reset, with gaps to afford code compliance width, and new lower treads were added to make the riser height legal.

But sometimes history is the basis for a design. No, not in the superficial Copy Cat Aesthetics of “Style”, but in the conscious use of salvaged and recycled pieces and parts in the realization of buildings that juggle the past, present, and future. Forget about being “green”, salvaged materials are often more stable, have the luster of age in their surfaces, and offer a history no ready-made technology offers.

The Barn of Fun

A Swamp Yankee architect needs to recycle if creativity is on a budget.  We built a barn almost 20 years ago. It was built with 32 types of woods, including the unending reuse of salvaged bits. About 30% of the 13 different species used in the timber frame by Bensonwood itself were Swamp Yankee Leftovers.

In the finished design, about half the windows were rejects purchased for $100 each from the supplier, and dozens of objects - from an 1886 pew, 1970 doors and client-rejected birch columns - were woven into the design. But literally central to the design was the recycling of our original home’s exterior stair, removed for an addition to the home, when it had to expand to accommodate children.

We disassembled our original teak and cedar stair, and stored it under our home. When we built a barn next to our house, we designed its stair into its creation.

1 1/2” T&G flooring and door material was made of six species of recycled softwoods harvested from sunken river barges. We had to cut a red oak down to build the barn and milled the wood to make flooring (which was air-dried under our home for two years). Other recycled bits of wood included strips of redwood salvaged from an 1880’s trestle bridge from California, and offcuts of maple, cypress, tulipwood, mahogany, and others.

The result is a magic place, a Swamp Yankee place: which our then 8-year-old son dubbed “The Barn of Fun”. The alchemy of materials, design and history is undeniable, and the necessity for recycling to “walk the talk” of sustainability is a happy requirement. 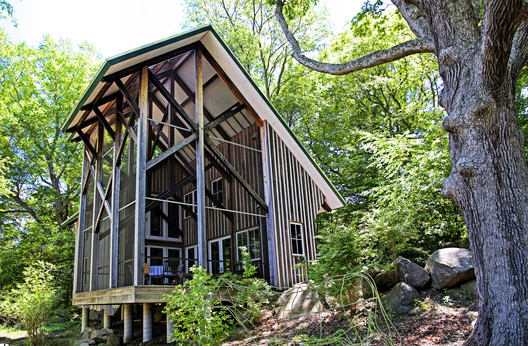