Hyunje Joo's design for a façade in South Korea is a proposal that addresses the separation between the interior and exterior with the construction of a flexible, light, and recyclable architectural element.

The project, a surface made up of 1,500 semi-transparent plastic baskets, diffuses the light and the silhouettes, while offering the ability to be reused with different configurations in different places.

Text description provided by the architects. We intend to reinterpret the possibility for the boundary of the wall using new materials. A flexible architectural element rather than a fixed element, this wall consists of 1,500 structural semi-transparent baskets.

The surface minimizes the separation between the inside and outside, as light and silhouettes beyond the space show through. Over the course of the day, changes show on the surface of the wall due to the diffusion and reflection of the material. The passage of time is more actively sensed from both inside and outside, as these light effects stimulate our senses.

When the building is demolished in 2 years, the baskets can be reused. 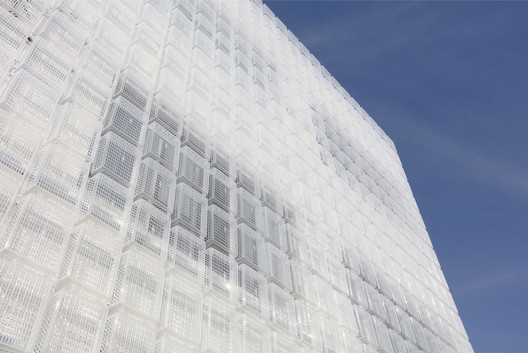