Design practice MVRDV has unveiled a new plan to transform their seminal Dutch Pavilion from the 2000 World Expo in Hannover. The project will convert the former Expo Pavilion into a co-working office building, as well as two structures for student housing and parking. The team aims to reinterpret the original project’s concept for the two new buildings and celebrate the iconic structure.

As MVRDV explains, the design of the original Expo 2000 pavilion was a response to the Dutch theme for the Expo, “Holland Creates Space”. Six Dutch landscapes were stacked into a tower, while the remainder of the area became an open outdoor space within the Expo grounds. Over the years, it became a renowned reference for sustainable design as a building that could be a self-contained ecosystem.

The new project maintains the “stacked landscape” concept, renovating the existing building and adding two stepped buildings on the perimeter of the original site. The renovated pavilion will house co-working offices and meeting rooms, while the forest level, ground "dunes", rooftop dome and the exterior staircases will be retained. The two new buildings add student housing (in the larger building) with offices and parking (in the smaller building). These form perimeter blocks around the site, stepping down to create an entry point on the west of the site that provides access to the landscaped courtyard in the center of the ensemble. The stepped roofs are made as colorful terraces with gardens and sports facilities to study areas and a cinema.

“It’s such an exciting opportunity for us to revisit this early project of ours that we first worked on over twenty years ago”, says MVRDV founding partner Jacob van Rijs. “The original design was certainly a unique design for a very specific purpose, but despite its outspoken design its core structure is highly reusable and more flexible than originally imagined. The differences between the floors will be maintained and converted into a functional office environment that nevertheless retains the unique experimental features of the Expo Pavilion. You will be able to work on the Dunes, or in the forest, or between the treepots.”

The team goes on to note that the larger of the new buildings will have nine above-ground levels hosting 370 apartments for students. The lowest level includes a bike parking system with more than 300 bike spots. Meanwhile the smaller building has five above-ground levels and one basement level. The three upper levels host offices and meeting rooms, while the basement and the first two levels host parking for the whole site.

The renovation of the Expo Pavilion and the construction of the new buildings are being conducted by iLive Expo Campus, a joint venture between the Real Estate developer Die Wohnkompanie Nord and the Micro-apartments developer and operator iLive. MVRDV is working on both projects with the project coordination on the Expo Pavilion by Die Wohnkompanie Nord and on the new buildings by AI+P Planungs GmbH. 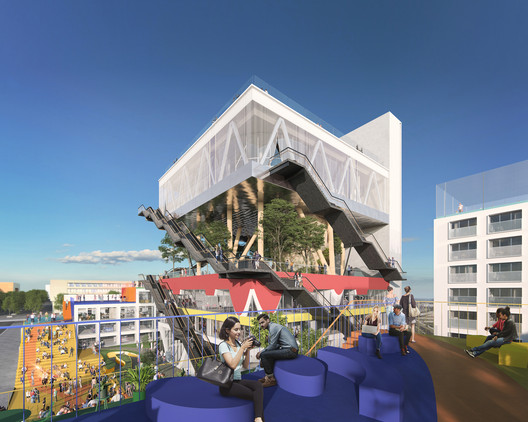