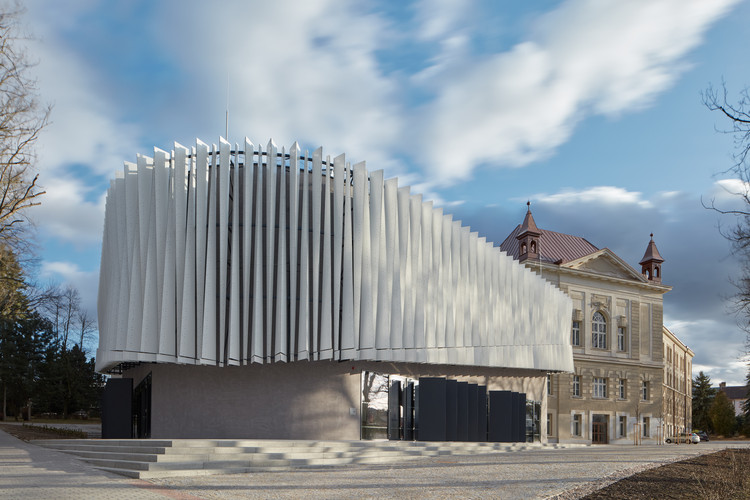 “The city of Jihlava has long endeavored to have its own college campus. We see the presence of students as essential for the city's cultural progress. The College’s position has been strengthened significantly by the new lecture center and auditorium. Being the largest space suitable for conferences or conventions available at the moment, the auditorium has become an important venue for various social events. During the restrictions imposed by COVID-19, the city council meetings were also held here.

For the city and the region, the building has a symbolic meaning, too. In the 1950s, a controversial communist party show trial and subsequent executions happened here, and the new building finally started to redefine this sad legacy. Its contemporary architecture is quite clear about the message it wants to give. Tearing down the five-meter tall prison wall offered us new and optimistic vistas. In many ways, the building itself seems to be an active participant in the rediscovery of Jihlava's political, social, and cultural identity.” (Martin Laštovička, Deputy Mayor for Heritage and City Assets)

The wing reconstruction area and the new lecture room VŠPJ (College of Polytechnics) is a modern concept of rapidly developing education center located in the northeastern corner of the lot, which was originally perceived as a farmyard. The place of the new building is strictly symmetrical, markedly triangular, thus for a construction seemingly disadvantageous. The authors from the studio Qarta architektura changed the disadvantage to an advantage by using the shape and by a link up to the existing block they gained compact space for a large span construction.

The roundness of the corner contributes to the integration of a mass into a complex context; the offset façade is another trace of a new shape, creating a transition space. Inside a super elevated hall is amphitheatrical seating for 333 students. Thanks to the steepness of the stands the arena offers excellent visibility as well as pure acoustics. Tribunes have underpass, the space under them will be used for social events. Connecting the presentation hall leads to a classical element of higher education “alchemistic workshop”, represented today by the multimedia laboratory “virtual factory”.

In contrast to the auditorium is a reconstruction of the original part of the historical pentagon, which was formally a court with a prison. Strictness, firm order, rigidity, and oppressive atmosphere were clearly evident at the beginning of the undertaking and the authors were fully aware, that the premises will newly serve young people with an open mind on their way to higher education. The motto became a colorful, inspiring, and non-conforming environment, preserving the historical footprint. The traditional materials are in a visible, original form; the industrial character is fully linked to the auditorium. A sole chapter was the discovery and the engagement of historical footprints, return of the original ceramic floor or stone sills with traces of bars, which make for a great experience in the interior.

The new auditorium of VŠPJ is a modern concept of dynamic contemporary architecture with industrial elements in a minimalist style in direct contrast to the original site and its newly reconstructed part of the northeastern wing. The whole area is easy to navigate and today, thanks to the enlightened leadership of the institution, is open not only to students and educators but also to its surroundings, fully in accordance with the philosophy of the modern college VSPJ. 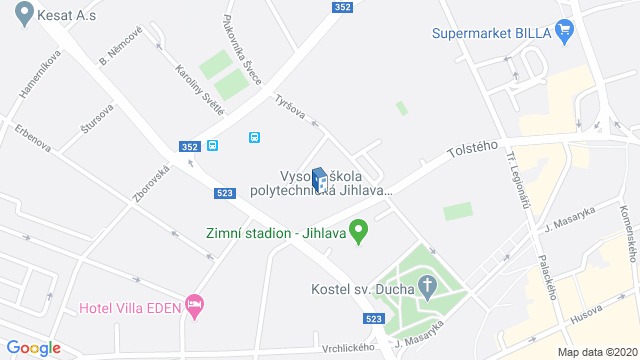 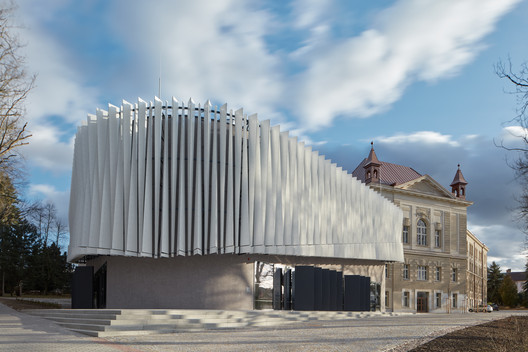