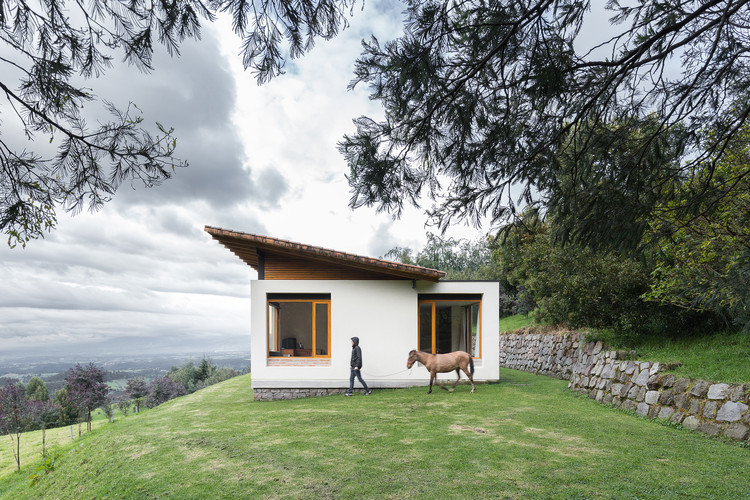 Text description provided by the architects. The house is located on the northeast hillside of Pasochoa Volcano, 3200 meters above sea level, some few kilometers from Quito. The request is a family gathering space, ideal for weekend rest and getaways. It had, however, one essential requirement: to be a one-story house where all the different spaces take as much advantage of the amazing view as possible. The steep inclination of the lot lead to one of the first major decisions, to place the house in the opposite direction to the natural slope. This resulted in a cut in the terrain, which then created a platform that allowed the development of the project according to the client’s needs.

The house was conceptualized with a combination of contemporary materials like structural steel, concrete blocks, as well as more traditional materials, such as hand-carved stone, wood, brick and clay tile, that sought to harmonize the house with the environment and traditional architecture of the surrounding area. The architectural program is developed with an open concept. Spaces are disposed horizontally and articulated by a corridor which joins them and at the same time becomes part of them. A limited budget restricted the house’s size, but it did not reduce the usefulness and appeal of it’s different spaces. Except for the bedrooms and bathrooms, all spaces are communal and as open as possible in order to maximize the use of space.

In terms of volume, the house consists of two main volumes of different materials, which seek to contrast each other. These volumes lay over a platform and are interlaced with the roof, creating new spaces that then become part of the house’s program. The roof has one single inclination which opposes the natural slope of the terrain in order to achieve more amplitude for the front facade, which opens up to the surrounding views. 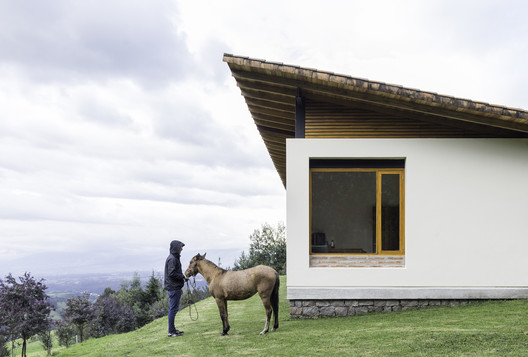