Text description provided by the architects. A brown touristic information shield indicates a nearby rocky hill. In Saint-Lô, along the river called the Vire, there is a fortress, which dominates the landscape. This discovery recalls Le Mont-Saint-Michel – an island commune situated in Normandy– and Saint-Malo. There are a lot of ruins dated from WWII in Saint-Lô. Tourists could nearly relive Allies’ bombing and those of the Nazis that razed the city definitely. Only the fortress is still standing.

The rock will be the principal element of the new constructions. The stones come from the hills, called the collines du Cotentin.cThese stones and rubble have been gathered by Saint-Lô to make huge protective walls and breathe life back into this city. After WWII the question of the reconstruction has been raised. The inhabitants lived a real trauma; there was a huge loss of innocent human life; there was pain; the inhabitants were also against the idea of transferring the heart of the city in another place. They fought for the reconstruction of the city, where it always was: on its fortifications.

The carved stones are its past and its future. The heap of pulverized stone was the key element of the reconstruction. These material elements or composites, which are normally different, will be gathered and juxtaposed in order to form the city.  The wall is used as a symbol of strength and sustainability and will be made of composites as a construction material. Our project is based on the wish to create a strong interiority that is able to offer the inhabitants the requested activities.

Between the volumes and the gaps, that form three patios, there is a courtyard, terraces/stairs, and a passage. These spaces are made in order to create passages and promote dialogue among users. They are also a fertile ground for exchange, discussion, and subversion, which are necessary for the creation. Our Technopole-city takes up the organisation of the medieval and university town.

The composite will be used: it has been gathered, recycled, transformed, assembled, and aggregated in order to form different concretes. All sails will be made of precast concrete, filled with insulation, and will be assembled on site. The concretes will be sometimes exposed, sometimes raw, smoothed, or transparent with fiberglass. There will be in their rudimentary state too that make the rubbles visible. This wall or fortress will be completed by “boxes”, made of galvanised steel and filled with rocks and that is commonly known as gabions. These gabions will be revolving and play the role of patios’ walls. When these walls are closed, they will protect the spaces; when they are opened, they will lead to facilities and activities.

In the upper part, the gabions will be thinner in order to introduce natural light and give the effect of crenellations to the wall. The latter is more and more detailed. These construction processes allow us to reduce costs and the duration of the work and provide the cleanliness of the construction site. Mixer trucks are also reduced to the bare minimum. Only the cement pouring process and the paving will be made on site.

The architecture, that we propose, is inspired by the fortress of Saint-Lô. It could be its “heir”. It could have a bright future in innovation and creativity. The entrance ground will be extended inside the wall of the city to form a place with stairs and a panoramic viewpoint. The place will lead to an event space on its left, to an activity space on its right; an amphitheatre/lecture hall and videoconference rooms will be created on the first floor, overhanging the expressway.

These different programs will be juxtaposed in order to avoid corridors and passageways, where there could be a lack of light. Interstitial spaces will be formed and their functions will be adapted to users’ wishes and events. The basic functionalities of the program – as the workshop- will be defined in order to fulfill their functions (privacy, comfort, and fitting).

We chose a structure that allows the users to rove from venue to venue, from space to space, situated around, in order to avoid the obstacles in the central parts and facilitate the adaptation. An innovative building is for us a building built with a process, which reduces the energy, necessary for the construction while giving it a high capacity of adaptation without difficulties. It also allows receiving other functions.

The exposed structure will be built of concrete and in perfect harmony with the walls and the grounds. The light will be particularly studied: a big part of it will come from the patios and the internal area near the huge stairway. Additional light will come through the transparent concrete.

The huge volumes, offered by this construction process, give us the possibility to design the furniture in the halls. For example, the cloakroom can be imagined as a complex installation with tensioned cables. The latter will allow hanging up clothes. Jackets and coats will only be accessible with a balance system and a key and will absorb the sound. In the hall of the centre of the activity, the cafeteria could be proposed as a food truck. So there is a possibility to adapt the culinary themes and the position of the truck: during the summer, the truck can be on the square for example. The spaces are freed for other uses. In the space of transit, alcove-shaped furniture will reveal small places, good for privacy, discussion, etc. The volume of the amphitheatre will be as a keep, containing sparkling treasures that are the discussions and conferences. It dominates the landscape as a lord.

To conclude our project is centripetal in order to create intensity, which is favourable for meetings. The different protagonists will be gathered to form a cohesion: the future of Saint-Lô town. 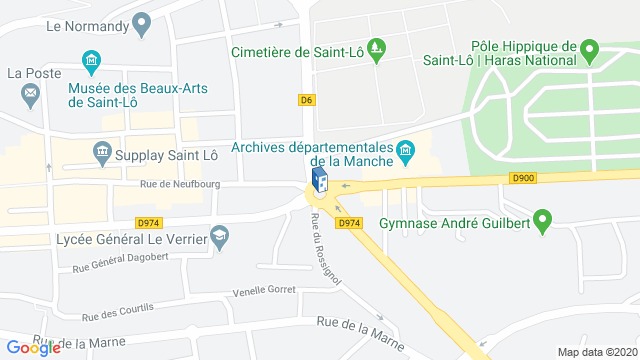