Save
House of Steps / Chaoffice 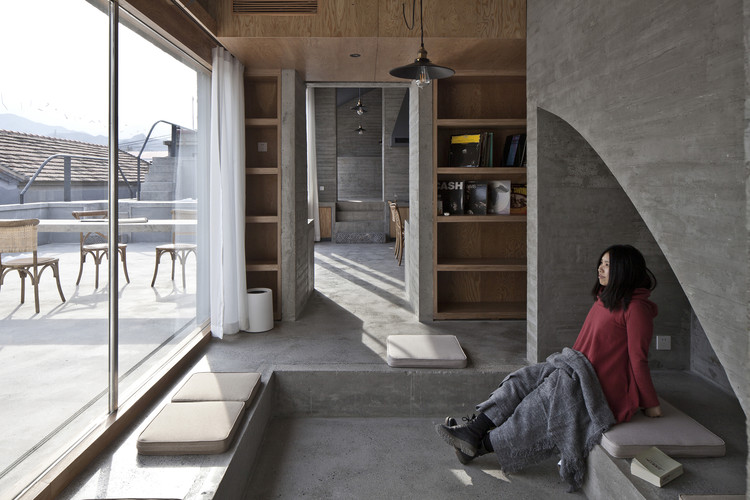 Text description provided by the architects. The project site is located in a small village within the Taihang Mountains 70 kilometers from Beijing. The village is spread from the bottom of a valley to the slopes, and the yard located nearly at the highest point. According to local folklore, a castle once stood above the village, built during the Yuan Dynasty. This is how the village’s name, meaning “under fortress” came to be,and as you look back you find yourself gazing upon beautiful Da’an Mountain and the Zhaitang Valley. Both of which have been left unchanged for millions of years.

The building would not to be an invention. In essence, the existing scale, shape, and color together make the building merge in with the background. At the same time, it acquires its own identity from small details of alienations. Although no physical evidence of the legendary castle can now be seen, we can still experience and imagine what the Mongolian solders would have experienced when occupying the site, their perspective still intact.

This experience becomes the starting point of our narrative. First of all, the distinction between indoor and outdoor, as well as the differences between rooms was all ignored. The entire site transformed into a grand platform; an open, shared space. The hutong lies on the north side, with an open view to the south.

Parts of the platform rise up and parts drop down according to the variety of heights belonging to the neighbor southward, and this created a sort of “platform upon platform”. As there are views on each corner of the site, the mountains themselves became a part of the building.

The entire space exists between unchanged ceiling and uneven ground. Variety in scale and shape help create distinct spaces, each providing its own feeling. platforms can be linked together using steps. Larger steps, between 400mm and 800mm, transform into a “table” or “chair”. When one walks through or sits inside, it would not feel dissimilar to nesting in a cave within the mountains. Contrasting this with the expansive views the site provides, the concept of “here and there, two mountains” appears.

In continuing the landscape, we tried to weaken the idea of “wall” as a boundary separating different rooms. In actuality the shear wall combined with added storage space together form a very thick volume, standing between different spaces.

Simultaneously, due to local customs, windows open on the north wall are not allowed, so we made the top of the wall bend inward, creating a gap between the wall and eaves, following the roof line. This window faces the hutong rather than the neighbors house and wind could then blow through the space, the bending wall helping to create a small environment underneath.

As people sit inside facing the magnificent views, they can feel a sense of shelter, and at night, the light from within makes the gloomy hutong brighter. 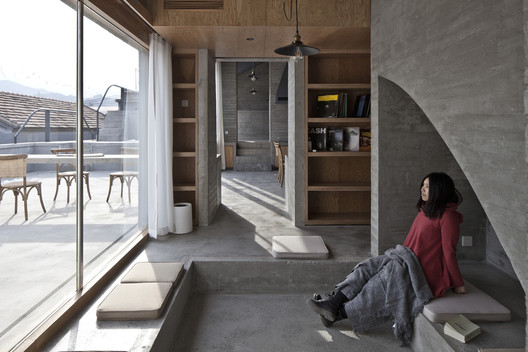