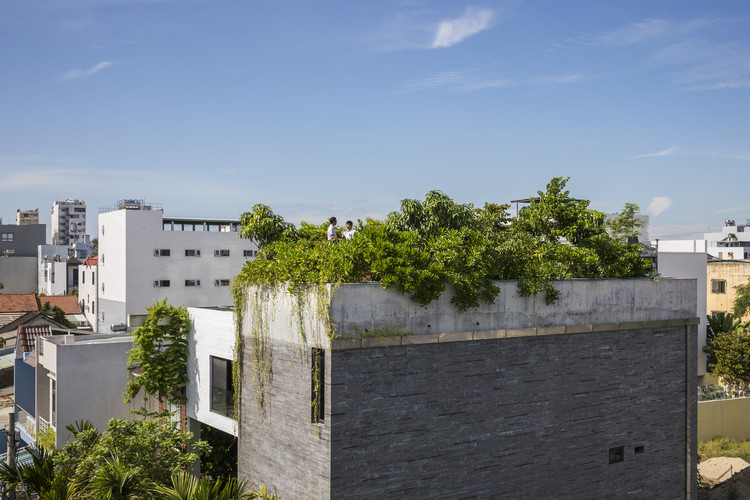 Text description provided by the architects. Inspired by his childhood imagination of a country house full of rich tropical greenery, grasslands and fresh air, the owner always had a desire to own a similar house which is located right in the heart of Danang City, Vietnam.

The design team had to propose a solution in limited area of land (250 sqm). The strategy was to create a green lung for the house to breathe by dividing the land into two parallel parts: one for the garden with a huge green wall alongside; other for the living space which has majority of its windows & doors facing towards the green lung with the purpose of bringing natural light, fresh air and the aroma of grass and flowers to every single corner of the house.

The green area lost due to construction work was compensated by a fruit garden on roof top that gets sunlight and shelters the building. The roof garden included 9 tree boxes interspersed with gaps provide more greenery view under natural day & night light. This has not only contributed to the greening of the city but also creates space for urban agriculture to serve daily fresh vegetable and fruit for family. The perfect combination of farming with a panorama view of an emerging costal city would surely relieve a person from the burden of a hectic city life.

To help the house operate more sustainably and economically, an automatic watering system recycles and circulates water from fish pond to the roof garden and vice versa, solar water heating and solar panel system installed on top produce energy for a family sized home. The design aims to make the building self-sufficient in green food production and to minimize energy consumption.

The house comprises of four main boxes - one big volume under the roof and three smaller inside the big one. These are extended and hanged over the garden to make space for bedrooms and living room. While the big box is covered by grey stone for a deep and charming feeling of the common space, the small ones are covered by white brick for an enlightening and warm feeling of living space. People can travel through different spatial in-house atmosphere. The narrow roof gaps allow the entry of natural light subtly and sufficiently for interior space. It creates an effect playing with light through the void between three levels.

This house is mainly made of local building materials which are available from nearby sources, such as the grey stone from Hoa Son rockery mine and brick from Quang Nam Province. In addition, the exposed concrete is an efficient material for low-tech construction in Vietnam and is durable under harsh local climate.

Under rapid urbanization, the lack of greenery in Vietnam cities generates various urban problems: increasing air pollution without purification, the city’s inability to retain rainwater, insufficient amount of space to cool the street, and people become inactive overtime. Thang House is one of the buildings under the “House for Trees” series and it pledges to contribute in greening of the urban landscape and improving the habitat by providing sustainable and environmentally friendly architecture. Thang House is yearly covered by tropical fruit trees which creates a tranquil, peaceful space for every family member and simultaneously preserves a green corner in the middle of this rapidly developing city. 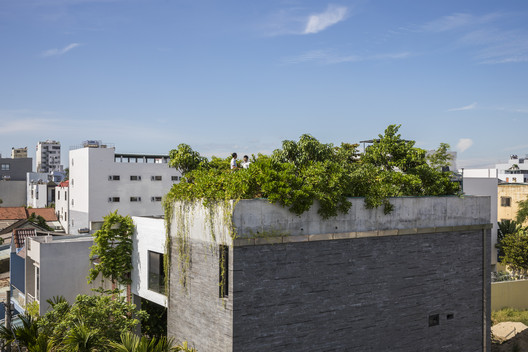