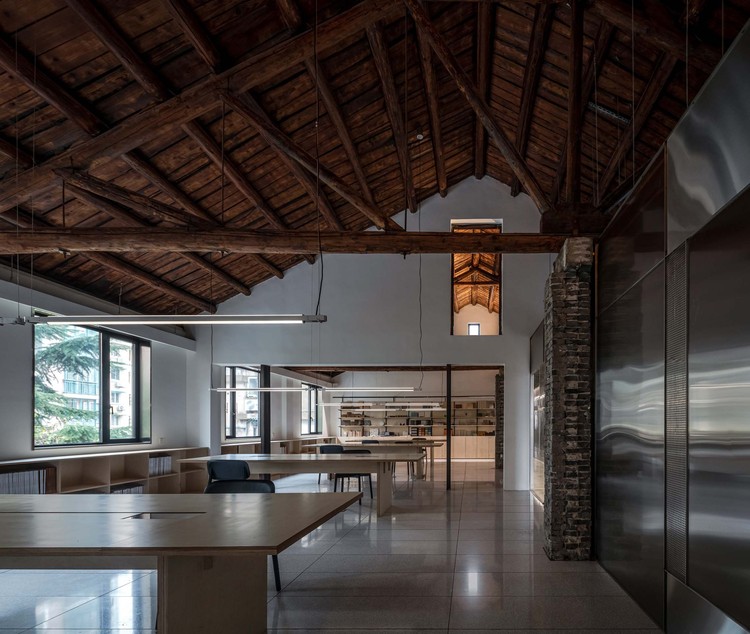 Text description provided by the architects. Situated at the park neighborhood of changning in Shanghai, Xingfu park co-working could be found at the end of the branch of Huashan road, in the top floor of a three-storey brick Spire roof house. Xingfu park is the first experimental co-working project that founded by hidden group, in the purpose of gathering muti-disciplinary background designers together, and stimulating the potential for collaboration. Atelier xy was in charge of the architecture renovation and interior design.

The designers who settled in Xingfu Park came from various well-known companies and used to supervise important projects. Now they are here either starting their own businesses, keeping an independent way or working. The proposal for a sharing space initiated by Hidden Group was quickly responded. As the upsurge of the sharing economy gradually cooled down, in fact people have just begun to incorporate sharing and sharing into the daily life. Therefore, the right of use and ownership is never what Xingfu Park’s discussing about the sharing economy, let alone the random “CO”. The point is, as an individual, how to choose having from being, and how to handle and live in harmony with the crowd.

To fully consider the professional characteristics of these architects, interior designers, fashion designer, product designers, and asset management teams; To encourage communication and collocation among various professions. At the same time, to balance the openness of public spaces and privacy is the top concern of Atelier xy in this project.

Traditional office space normally uses partitions to enclose rooms of different function, besides rooms are corridors. Atelier xy goes the opposite way by taking corridor as the key object of the entire space, treating it as an independent volume embedded in this open space. The corridor itself also incorporates functions like entrance, traffic circulation, feature wall，hidden equipment, and etc. At the same time, due to the volume of the corridor, the entire space is naturally divided into open office area and other functional areas. Once we defined the corridor, the design of the space is completed too.

In order to preserve the original structure and height of the old factory building, and to enhance the daylight as much as possible, Atelier xy boldly removed all partitions and floor slab that was built in the past few decades, so that we end up with a historically space of quiet and rational though.

Several large windows in the south have been retained to ensure sufficient natural lighting for the working area. As a shared space, xingfu park is very restrained for having only 4 working table. The wall-mounted material display to the west has become the base of space theme, reminding everyone that this is a shared office with a design theme. There is enough spare space for designers who settle in according to their professional characteristics.

Material library and several desks in working area are made of multi-layer birch laminate. The wire space is smartly hidden inside the desk. A Carrara marble cover plate not only illustrates the function but also shows detail and texture.

Conference room located in the north of the space adopts self-leveling cement and light gray wall paint. The metal cross steel profile which is neatly arranged on the wall in an array on the background wall is toset material samples. The stainless steel ring chandelier hanging above the conference table highlights the room.

Showroom next to the entrance also uses cement self-leveling and wall paint as the main material. The ceiling and the window opening on the wall apply stainless steel material for the corridor. The original wooden roof on the second floor combining with warm lighting provides a warmer atmosphere to the showroom. The window opening on the second floor was the attic’s door opening before. Through the window, people can see another former door above in the main wall of the office area. Architect preserved the door frame as it was. People can see the small window on the west façade through the used door opening. The progressive spatial has a sense of time. People can recall the scenes of more than ten years ago, while simultaneously have a panoramic view of the modern working daily in xingfu park.

The layout constitutes a simple circulation, containing complete and rich functions. Different materials and nice details are match with interior space, as well as refined customized lighting. All design language and achievement of the above disappear under the original wooden roof. People who fantasize about a certain freedom and dream of a fuzzy future come and work here, have limited communication and exist rationally. The boundaries of the relationship also gone. 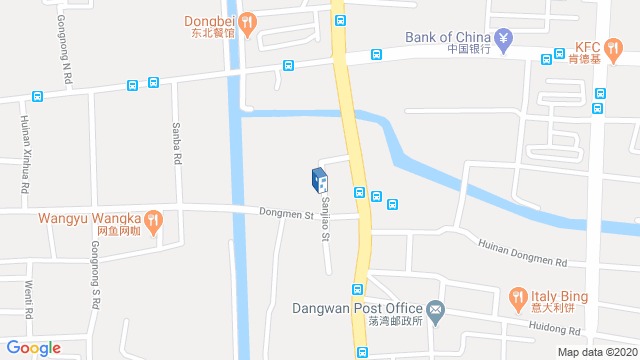 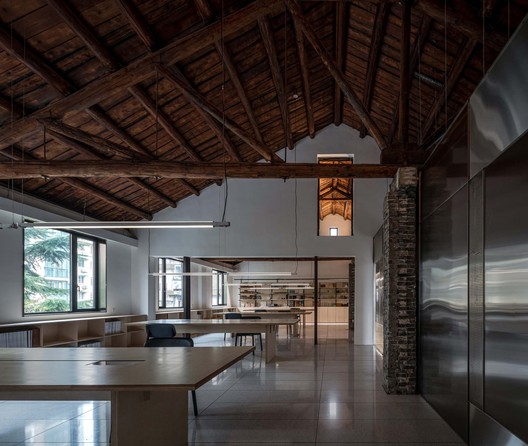