This article is part of "Eastern Bloc Architecture: 50 Buildings that Defined an Era", a collaborative series by The Calvert Journal and ArchDaily highlighting iconic architecture that had shaped the Eastern world. Every week both publications will be releasing a listing rounding up five Eastern Bloc projects of certain typology. Read on for your weekly dose: Futuristic Hotels and Avant-Garde Resorts.

Overlooking the turquoise shores of Armenia’s vast Lake Sevan, the Writers’ Resort is a modernist masterpiece. It was built in the early 1930s by avant-garde architects Gevorg Kochar and Mikael Mazmanyan for the Writers’ Union of the Armenian Soviet Socialist Republic. In its golden age, this idyllic resort hosted literary figures of the likes of Simone de Beauvoir, Jean-Paul Sartre, and Vasily Grossman. Shortly after the resort’s opening, Kochar and Mazmanyan were arrested and deported to the Arctic Circle as a consequence of the Stalinist oppression of the arts at the time.

The first part of the resort is a rationalist four-story building with curved balconies and a glazed stair-tower with a stunning view over the lake. In the early 1960s, Kochar was commissioned to design a new cafe wing for the resort. He designed a long, curved glass volume floating above the rocks overlooking the lake, with the whole construction balanced on one thick concrete leg. Daring and eye-catching, the cafe’s futurist aesthetic is well-suited to a country that was then sending people into space. Today, although in dire need of renovation, the resort still operates, and there are ambitious plans for its renovation underway. However, for the time being, the building still stands as a living testimony of Kruschev’s modernism, innovation, oppression, and the avant-garde dreams of the 20th century.

Once a utopian holiday destination, Druzhba Sanatorium resembles a concrete spaceship landed on a hillside by the Black Sea. Designed by Soviet architect Igor Vasilevsky, the resort, which translates as “friendship sanatorium”, opened in 1985 as a joint Czechoslovak and USSR project. For Soviet citizens, subsidized holidays in a sanatorium were meant to be “heaven on Earth”, a chance to relax, attend cultural events, undergo health treatments, and enjoy the warm seaside breeze of Yalta.

Druzhba’s outlandish shape and location are partly the result of the futuristic trends of the time, partly the product of geographical constraints. Initially, the sanatorium was meant to be constructed by the seaside, but due to the lack of space, the architects decided to build it further up on the hill. Its ominous shape, resembling a monolithic honeycomb beam, raised some eyebrows in foreign governments at the time, who thought the estive establishment was meant to be a secret military base. Today, the spa has been renovated and remains open.

In the heart of Kyiv’s city centre stands Salute Hotel, a seemingly dislocated white cylindrical building. The hotel was built in 1984 and, with its preposterous round shape, it is a living embodiment of the futuristic vision of late Soviet modernism — its aesthetic power, challenges and failures.

According to the original design by architects Avraam Milestly, N. Slogostkaya and Vladimir Shevchenko, Salute was meant to be a skyscraper. Due to conflicts with the party leadership, the height of the building was reduced to less than half. Today, the hotel owes its odd design to the fact that the seven-storey hotel is built on a concrete foundation designed for a much taller construction. Inside, the hotel has 19 reinforced concrete walls that meet at the centre of the building, and the rooms can only be accessed via lifts or a circular ramp. It has a hundred rooms, 90 standard ones and 10 larger suites. Because of its small size, and the inability to expand, the hotel was not profitable from the beginning. Yet somehow, Salute is still in business today, with rooms starting at £45 the night.

Built in 1969, this gravity-defying construction was inaugurated on the occasion of the World Ski Championships in 1970. The original raw concrete version of Hotel Panorama was part of the new village of Štrbské Pleso, a project to construct a ski resort in the heart of the Slovak Tatra Mountains.

Hotel Panorama was designed by Czech architect Zdeněk Řihák. Known for his edge-cutting style, Řihák endowed the Panorama Hotel with an impressive graded frontage widening towards the top, offering a breathtaking view of the Tratra peaks at 1355 metres above sea level. Very popular at the time of the opening, the hotel stood adjacent to a station serving Czechoslovakia’s main railway line. Panorama has been completely refurbished, and, although its iconic shape still stands, the concrete facade has been replaced with paint and claddings.

Today, this modernist complex in the outskirts of Sofia lies abandoned, buried in foliage and graffiti. 50 years ago, it hosted one of the country’s most important personalities — former Bulgarian Communist leader Todor Zhivkov.

The complex was constructed in 1977 to be a spa and a holiday residence for government officials. However, the Party leader liked it so much that he decided to make it his personal residence and a hotel for worthy guests. Following the death of his daughter Lyudmila, Zhikvkov made it his permanent living quarters, and he stayed there until he was driven out in 1989 after the fall of the USSR. Since then, the five residences, additional buildings and surrounding park of the vacation complex have changed hands, and have been repurposed into a golf club, a hotel, and a training centre for the Bulgarian National Security Agency, but has now fallen into neglect. 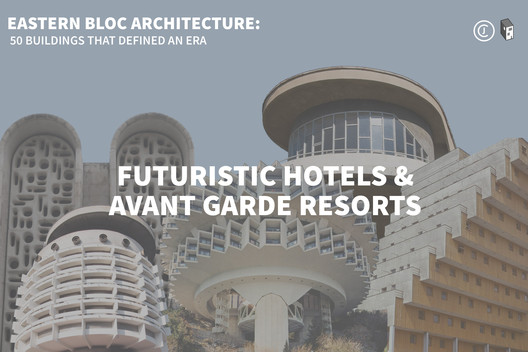