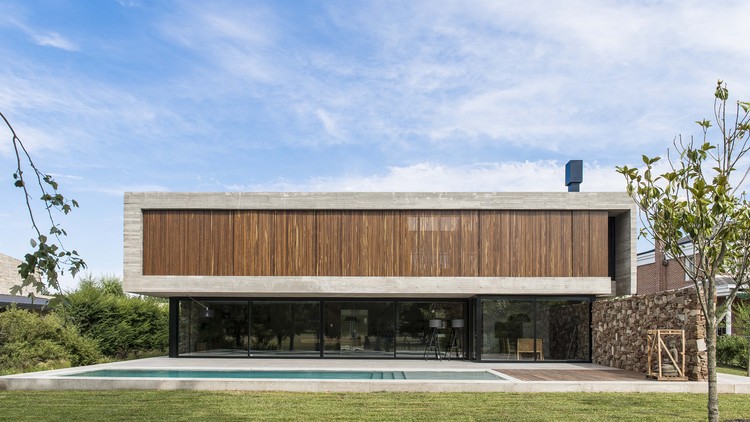 Text description provided by the architects. The plot of land is located in a neighborhood of the suburban area City Bell, in the outskirts of La Plata City. It has the special feature and the value that its back yard lies with the golf course. We were asked to take special care in preserving the intimacy without losing the relationship with the natural surroundings, and at the same time, we were asked to solve the condition of a single-parent permanent home where the kids would reside part of the time.

In this respect, we developed a house closed towards the street and opened to the back side, with a strong concrete volumetric character on the upper floor, in opposition with a fluid ground floor directed by stone walls.

The house shows a clear hierarchical and pragmatic division in three levels, a basement which includes a /leisure or playful/ program, a public ground floor frankly related to the landscape, and an upper floor which includes the sleeping areas. These spaces are linked through two distinct systems of stairs, a concrete inner one wich 'sews’ the three levels and an outer one made of metal UPN profiles which opens up directly to the children's area.

Regarding functionality, an entrance courtyard in the ground floor gives scale to the access, while the strategic placement of the stair and the kitchen divides the sitting room from the quincho and services. In the upper floor, the stair and two empty spaces, an inner and an outer one, separate the master bedroom from the children's area.

Regarding its structure, an independent system with slabs and continuous beams was used to generate back-side cantilevers. The structure above the ground floor is determined by inverted beams with the aim of achieving the visible slab, which defines the public plant. While the structure above the upper floor presents and inverse criterion of hanging septum beams which, as a hood, contains the private area.

The image is defined by the structure, a suspended visible concrete box and a combination of closing systems, which sit over some stone walls, enclose and give privacy to the public area. The outdoor closings were used in two different ways, some are transparent to allow the relationship with the outside and others are semi opaque, fixed or mobile that control the light and privacy in accordance with the use and customs of its inhabitants.

Inside, two kinds of closing elements were used. Some are fixed to define the bedrooms and services areas, and others are mobile to link the public zones of the house.

As in any production of the studio, in this house the importance of the detail is verified to fulfill the realization of the construction work, transcending the scale of the project. Detail is temporally prior or parallel to the general project. We search an architecture where the whole and the parts keep a permanent and unchangeable correlation.