Located in the neighborhood of Nordhavn, in Copenhagen, Park ‘n’ Play generates sports activities and a playground at a height of 24 meters. Topping a parking house, the project named Konditaget Lüders won this year’s Danish Design Award. Held as a live stream due to the Covid-19 situation, the biggest Danish design event of the year, celebrates the best creative solutions making a difference in our society.

Recognizing design-led interventions that humanize or simplify city living, the “Liveable Cities” award highlights contributions that improve wellbeing and create opportunities for city inhabitants while also having a positive effect on the city environment and ecology.

Celebrating the award at the top of the parking house, JAJA Architects, Architect, and partner Kathrin Susanna Gimmel expressed her content by saying that “with Konditaget Lüders we have succeeded in a design language that combines several public functions at the same time, and the prize will kick off further life in an international movement that is just moving towards integrating several functions in public construction. Hopefully, we can use that to inspire similar projects internationally”.

Consisting of 15 members, all leading experts in Danish and international design, innovation, and much more, the jury stated that “this is the first time we have seen a parking house come alive. The living roof has been incorporated into the building in a very intelligent way, allowing people to run and play, while giving them access to a view, you would normally have to pay for. There are parking houses all over the world, and with this example, Denmark can position itself as a leader in this field. Other major cities will want to copy this solution and/or hire Danish companies to design it. We have seen the use of rooftops for leisure before – e.g. for private tennis courts and pools – but with its public access, this solution has a democratic appeal”. 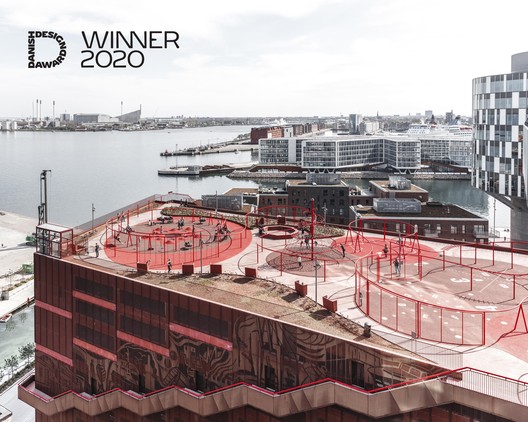