Save
New Orleans: Modern Design in The Big Easy
Share
Or
Copy 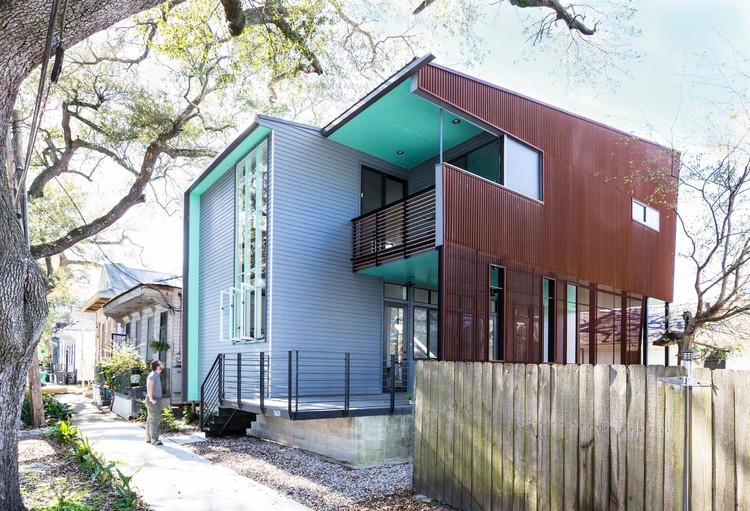 Showcasing contemporary public and private projects, each of the following designs were built in New Orleans within the last ten years. From modern homes and community housing to an elegant chapel and city park, the projects are a small sampling of building efforts across the city. Sited between iconic shotgun homes or in neighborhoods shaped by flooding, the buildings each look to reinterpret a history of place while establishing their own design language.

This duplex is designed to maximize use of the lot (32’x105’) with suitable space for separate, large families (or groups of people) in each unit. The central goal of the design was to configure communal spaces in a way that best accesses outdoor light, air and volume despite the density of required spaces.

This home arose out of the post-Katrina building effort in New Orleans for a neighborhood in need of new places to live. Neighborhood Housing Services, who promotes and markets low-cost properties in economically-strapped neighborhoods of New Orleans, was able to offer the house at a vastly reduced rate. In turn, buildingstudio contributed its full design and coordination services.

Part of a larger master plan that envisions a new, greener future for the City of New Orleans and its riverfront, Crescent Park was designed to reconnect people with the river and transform the remnants of the city’s industrial and maritime past into a verdant, accessible, community asset.

The Bastion Community is a 58-unit fully affordable housing development centered on the needs of post-9/11 combat veterans, many with lifelong medical challenges, and their families and caregivers. Bastion leverages this concentration of services members with shared life experiences towards a community health model for long term care.

The FLOAT House by Morphosis Architects

The FLOAT House was designed to be a new kind of house: a house that can sustain its own water and power needs; a house that can survive the floodwaters generated by a storm the size of Hurricane Katrina; and a house that could be manufactured cheaply enough to function as low-income housing.

Designed as a quiet refuge and intimate sanctuary for sacred reflection and contemplation, this new chapel on the church campus is a subtle sculptural addition to the landscape. The new chapel’s steep, angular roof-line reflects the adjacent form and context, thus allowing the inclusion of significant glazing elements from above, adjacent to and behind the new sanctuary.

This home was designed, built, and owned by the architects that worked on it. The group purchased the substandard vacant lot in a public auction held by New Orleans’ Redevelopment Authority, with the stipulation that winning bidder had only 12 months to design, permit, build, and occupy on the little 30’ x 90’ lot.