Save
What Are Decibels? (Or How Noises Affect Our Health)
Share
Or
Copy

Noisy environments can significantly and negatively effect our bodies, and are a great villain to concentration, learning, and productivity in classrooms and offices. Headaches are one momentary symptom of noise. But staying exposed to very noisy places can bring greater problems such as hearing loss, lower concentration, high blood pressure, and even poor digestion. It can also trigger high levels of stress, sleep disturbances, mood changes, increased heart rate, and ringing in the ears. This is an invisible enemy and is often neglected in big cities with the noise of heavy traffic, demolition. and noisy equipment, such as generators and air conditioners. However, effective measures can be taken to avoid this unnecessary noise.

But to begin understanding acoustics, there are several important concepts and terms necessary to understand first. Acoustics are a very complex science, and architects often only give it due importance when it is not well resolved. The most commonly used unit of measure for sound is the decibel. Unlike units like meters or kilos, of which most people vaguely know the comparative length or weight, decibels are much more difficult to measure without a Sound Level Meter.

Graham Bell, a Scotsman whose surname was honored with the name of the unit, was the first to discover that the scale of sound perceived by the ear is logarithmic, like the Richter Scale, which quantifies the magnitude of an earthquake. This logarithmic scale of the sound intensity ratio adjusts to the intensity perceived by the human ear. Since we can hear a very wide range of sound intensities, the limit of audibility -- 10-12 watt/m2 -- is conventionalized as 0 decibels. Thus, there are sounds lower than that, but we cannot hear them. At a frequency of 1000 Hz, the human ear painlessly supports up to an intensity of 120 dB. Above this value, sounds are harmful and can irreversibly destroy the structures of the inner ear. Being exposed to sound levels above 90 dB for more than 4 hours is already highly harmful.

The World Health Organization (WHO) uses the value of 55 dB as the ideal maximum for exposure most of the time. The WHO points out that about 20% of the population in European Union countries is exposed to noise above 65 dB (A) during the day, and more than 30% is exposed to levels above 55 dB (A) at night. Especially at night, exposure to noise of this intensity can trigger everything from sleep disorders and insomnia to increased blood pressure.

To give an idea of how loud this is, a normal and civilized conversation is around 60 decibels. This is also an important reference value, halfway between the limit of audibility and the limit of pain (120 dB). Normal breathing emits 10 dB, a soft whisper 30 dB, and a relaxing rain sound 50 dB. From 60 dB on, it is necessary to pay attention to prolonged exposure to noise. 85 dB is already equivalent to the noise of a congested street, 110 dB to a baby crying loudly beside you, and 120 dB to the intensity of thunder. See, in the table below, some reference values: 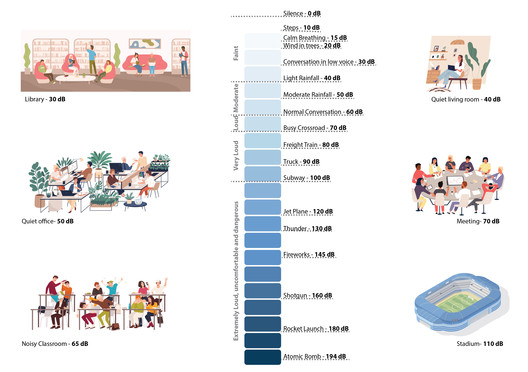