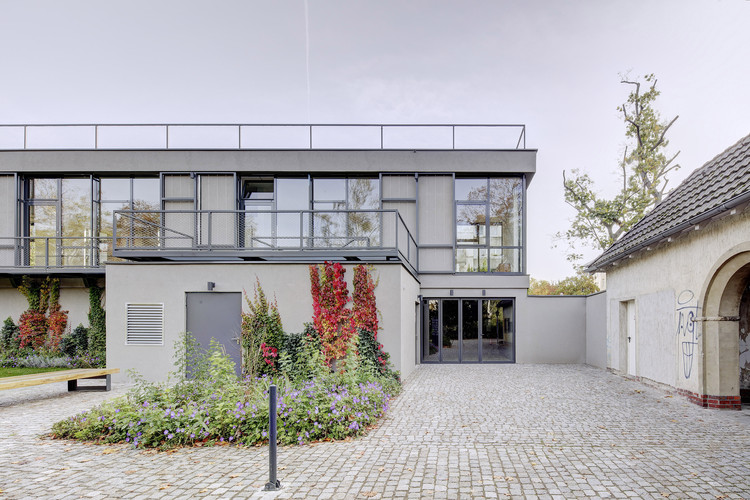 Text description provided by the architects. Based on the concept of the Silent-Green Cultural Quarter to create a public campus for cinematic art, the new building complements the historical domed building of the former crematorium with studios and group work rooms (300 sqm) for the German Goethe Institute's worldwide scholarship programme for artists and interested groups. In close cooperation with Berlin's upper authority for the protection of historical monuments, the studio building was developed as a restrained yet self-confident structure that enters into a formal dialogue with the main building, the domed hall. The aim was also to interweave the appearance of the building with that of the garden, in which the studio house grows together with the garden over the seasons through an all-round enclosure with seasonal climbing plants.

Thus the house forms a green counterpart to the rows of trees of the cemetery on the opposite side of the garden. The meandering frame divisions of the climbing aids and window areas give the façade a rhythm and connect the elements: façade, window, staircase to an all-round solitaire. The vertical structure of the horizontal building, its height, and the emphasis on the attic create discreet references to the listed building.

On the ground floor is the access gallery to the underground concrete hall. The gallery is a 50m long room volume, lowered into the depth, which stages the transition between the upper and lower floors. The rooms on the 1st floor are accessed via a pergola. The studios can be used flexibly for a temporary living and working situation. An adjusted bathroom offers the structuring in workspace, sleeping area, and kitchen. They can be separated or combined via a curtain system.

The roof serves as a kitchen garden to supply the users, the in-house canteen, and to implement permaculture concepts. With the garden and the green façade, the building also contributes to ecologically sustainable and climate-friendly urban development. With the simultaneous expansion of the underground hall (1800 sqm) into a presentation and exhibition space, a platform with laboratory character was created, where people can live, experiment and publish new artistic works. 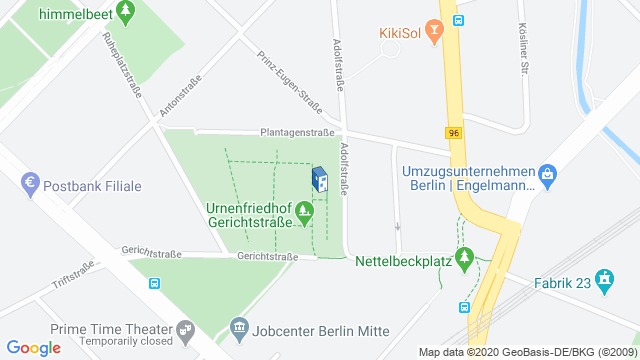 Location to be used only as a reference. It could indicate city/country but not exact address.
Share
Or
Copy
About this office
KOMBINATIV Office for Architecture
Office
•••