A characteristic feature of the classes of YACademy - the school of architecture founded by YAC in 2018 - is offering students interesting, hands-on workshops. In the school's curriculum, a key focus is the relational dynamics between natural and artificial, between anthropic intervention and landscape pre-existence. These themes prompted YACademy to create a High-Level Training Course in Architecture for Landscape: a program made up of lectures by renowned professionals, followed by internships in some of the most well-regarded firms in the world. 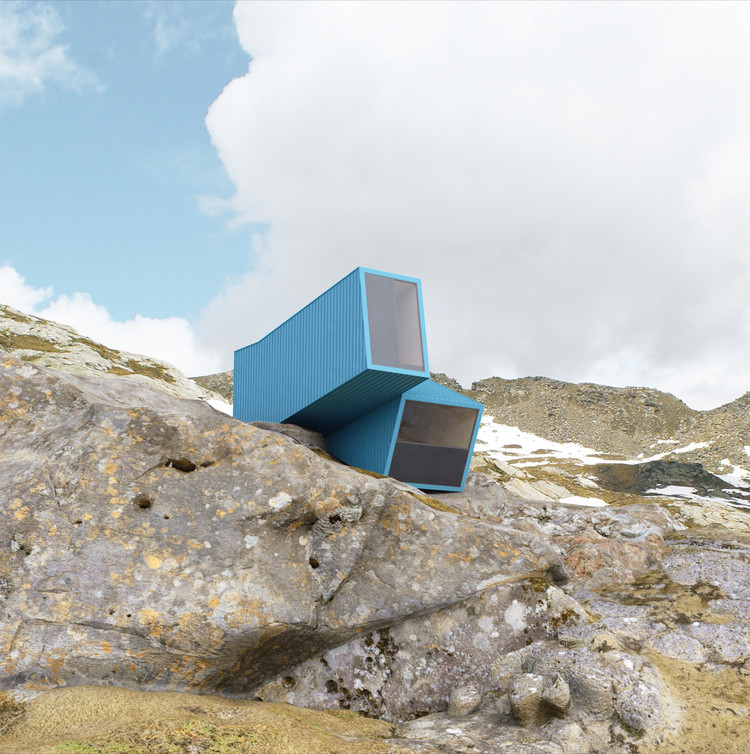 After its first edition in 2018, carried out in collaboration with Arte Sella in the Trentino region, the YACademy class moved to Valle d'Aosta where they were tutored by Cantieri di Alta Quota. The project for this second edition was to develop a series of proposals for a bivouac to celebrate the memory of Claudio Brédy, a politician from Aosta who was passionate about the mountains and tragically lost his life on the peaks overlooking the Vertosan valley (the site of the proposed intervention). Today, the Brédys want to honor Claudio's memory and his passion for the mountains by creating a bivouac, the design of which was entrusted to the students of the 2019 Architecture for Landscape class.

Following are descriptions of a selection of projects composed by the class. The course, which relied on the participation of prestigious architects like Eduardo Souto De Moura and firms like Snohetta, will be offered again in 2020. As in the previous two years, it will feature an exciting workshop topic and lectures by renowned designers.

The first project team was comprised of Claudio Araya, Maria Valese, Natalia Kogia and Iga Majorek: a mix of Chilean, Italian, Greek and Polish origins. The students designed a large bivouac (designed to accommodate up to 12 people) with a design approach that achieved excellent results both technically and perceptually. Oriented towards the south to maximize the energetic effects of exposure, the bivouac not only allows for contemplation of the wonderful view of the mountains, but also offers a particular point of view for star-gazing. The result is a dual-oriented structure, ramping on one side and sloping on the other, creating a double telescope that looks both to the valley and to the horizon. This double slope creates a small amphitheatre inside, directed towards the valley view. Supported by a steel truss structure buffered with prefabricated panels, the bivouac is covered with a cyan sheet that establishes a visible, consistent and effective sign on the mountain landscape.

The second project is a proposal by Chiara Tessarollo, Skye Sturm and Facundo Arboit, respectively of Italian, United States and Argentinian origin. The team put forward a proposal of great lucidity and compositional rigour: an architecture that drew inspiration from the mountain context in its essential characteristics. Their design is an apparently simple object, but one that is actually the result of a series of articulated and consistent reflections. The bivouac forms an intimate and welcoming interior space through a slope that projects the visitor towards the valley. Configured primarily as a telescope, the space is aimed at framing the wonders of the Vertosan valley in a southern exposure that maximizes energy gains through a large, singular window. A series of distortions are imposed on this telescope, allowing snow to be disposed of effectively from its surface; these distortions are operatively dictated by necessity but confer singularity to the architectural object. Regarding the choice of materials, the team followed in the steps of local construction traditions and chose wood for the skin of their structure. The result is modular and easy to install, drawing technical and compositional strength from its simplicity.

The third project is a proposal by Michele Sicher, Luca Maria Bartolini and Carlo Baldin. The designers propose a project with highly original features, not focused on external influences - as is common in contexts characterized by a predominant landscape – but on internal dynamics, relationships and exchanges between individuals. The interior is arranged to allow both privacy and community by arranging the bivouac on three levels, which allows for interaction between guests in the internal shaft, rather than isolating them on the two superimposed balconies. The design outcome is an object with a mainly-vertical development that is not oriented according to a precise view, unlike the previous projects, but rather open to a series of views of the surrounding environment (the lake, the valley, the mountain ridge). With a strong presence emphasized by the choice of rusty copper as the skin, the ambition of this architecture is to become a landmark feature for the intervention site.

The fourth project is a proposal from Guglielmo Rapini, Remigio Baldoni and Sebastiano Paulitti. They interpreted the design of the bivouac with originality and irony. The compositional process starts from a reflection on the main element that historically represents the alpine bivouac: the pitched roof. Starting with a reinterpretation of this roof, a simple, functional architecture is created that is also equally incisive on the aesthetic and perceptive level. The building is placed on the intervention site following its orography: in this case as well, the building opens up to the surrounding landscape with a sloping section. However, the dialogue between levels and slopes is not only limited to the interior of the bivouac. As a matter of fact, the access point - placed at a different level compared to the body of the building - is a fundamental element for the completion of the intervention on a formal and perceptive level. This entry gives the designers the opportunity to include an architectural accessory, also characterized on the chromatic level, that is able to redefine the overall perception of the intervention.