Read on to discover how Artificial Intelligence or AI became an essential part of current post-war reconstruction schemes.

“Contemporary conflicts are fully integrated with the terrain, as the ultimate stakeholders and primary actors are the local populations”, states Mitchell Sipus in Smart Cities dive. In fact, wars have changed, therefore, the efforts made to rebuild a war-torn city must change.

A city’s identity, deeply embedded in its urban cultural artifacts, is often deliberately destroyed in wars. While Identity, urban destruction, and reconstruction are interlinked, decision-makers neglect this notion when proposing future plans. According to a research by Nurhan Abu-Jidi, “reconstruction projects and strategies often focus on the physical dimension of reconstruction and inevitably ignore and even further marginalize the city’s devastated identity, and particularly its spatial and socio-cultural dimensions”. In fact, this is where Artificial Intelligence can have the biggest impact.

Lately, AI has proven vital when mapping post-war cities. In fact, based on people’s memories, stories, and experiences, AI can recreate a space that is no longer there -and not only in the physical sense of things-. Counting on the collective memory to help generate useful data, AI can translate the lost and sometimes forgotten urban surroundings.

As technology moves forward, the possibilities become endless. While these systems can rebuild exact replicas of ancient cities and artifacts, the question remains whether we should go down that road or take the initiative to plan a new city, a city of our times, a city that looks more like its current inhabitants?

Other than rebuilding the existing, digital Architecture and culture, once brought together can improve the future of human life and cities. In fact, AI can generate useful data to help policymakers create development plans for post-war reconstruction, relying on the existing urban fabric rather than drafting new schemes from scratch.

“While Reconstruction, is a form of social and cultural resistance, future scenarios should be based on exploring the possibilities and potentials in the resulting spatial fragments of the devastated city”, states Nurhan Abu-Jidi. Basing the approach on what exists, rather than on what was destroyed, future proposals can reconstruct an enhanced urban fabric, more responsive to people’s needs. Considered a sustainable and cost-efficient method, the approach can engender significant design decisions that encompass all the collected information, from mapping and surveys to people’s aspirations and expectations. Focusing on innovation, environmental qualities, and integration, future post-war plans can lead to a successful and contextual result.

The Case of Syria: Bringing Back Collective Memory and Projecting into the Future

Reparametrize Studio has been tackling this subject for a while, mapping destroyed cities in their ongoing research entitled “Re-coding Post-War Syria”. The firm’s work was first exhibited at the 8th Bi-City Biennale of Urbanism\Architecture in Shenzhen curated by Carlo Ratti Associati, which explored the evolving relationship between urban space and technological innovation, between cities, people, and machines.

Relying on state-of-the-art technologies in order to generate data such as 3D scanning, their project analyzes the existing destroyed urban fabric and highlights the areas that need reconstruction. Moreover, the human factor is essential in their venture. Data is gathered from local citizens and refugees, who were questioned about their past memories, and their expectations for future developments. Always implicating the community, design decisions are also shaped by the citizens. Adding multiple dimensions to the data, not only geometrical information, the project becomes completely integrated.

While the Venice Charter did not address reconstruction on a massive urban scale, and the Riga Charter gives a wider definition for reconstruction as “evocation, interpretation, restoration or replication of a previous form”, the post-war reconstruction process does not have proper guidelines. Nevertheless, new technologies with notions such as culture, memory, integration, adaptability, and sustainability, can engender significant interventions. 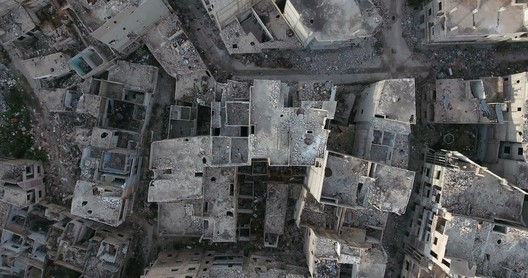