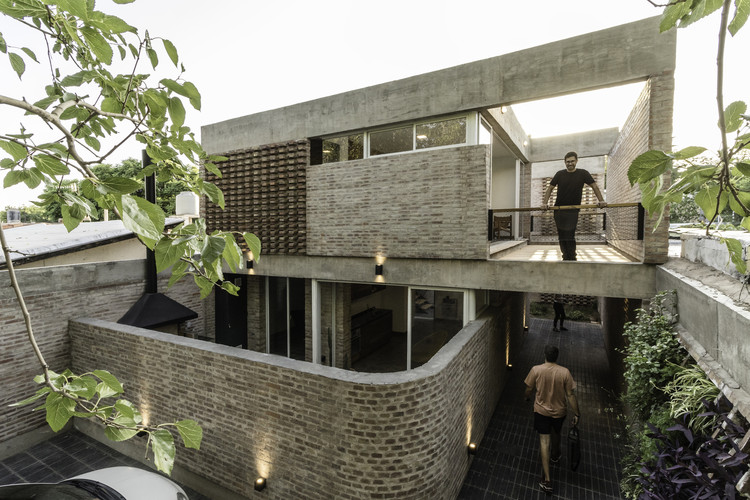 Text description provided by the architects. Located in the old railway neighbourhood of the city of Mendoza, a low-density residential area, the Martínez 3458 building is made up of four housing units, composed of two rooms each. The lot on which it is located is 9.5 meters wide by 28 meters deep.

The project is valuing every possible square meter, established by the low occupancy rates of the area (FOS and FOT). Taking full advantage of the lot, without neglecting the neighbourhood scale in which it is incorporated, the building was decided to be drawn from the municipal line. In this way, the main characteristic of the area is respected, which is the “garden neighbourhood”, leaving space for the garages.

The design premise was to solve four units with their own expansions, maintaining some degree of independence and privacy in relation to the other units. Thus, there is a succession of private and shared courtyards, which enables cross ventilation and good lighting.

Although the program is repeated in each module, they all have particular details that characterize them. This is mainly manifested in the winnowing, to take advantage of natural light and create privacy conditions. Large windows were used, in order to expand the limits of each unit through visual extensions. Brick screens are also placed in the openings to generate privacy between units, filter the light and provide quality to the spaces, characterized by a feeling of shelter.

Curved elements have been used as a resource that emphasizes the circulation. It is used in the first wall of the entrance and is then repeated in the wall next to the staircase. In the interiors, this resource is used to create differentiated spaces.

The project is materialized through the use of traditional construction systems and the most common materials. Common brick, bare concrete, wood, calcareous tiles, reconstituted granite exterior floors, make up the palette of materials that avoid eccentricities and guarantee noble ageing with low maintenance costs.

In particular, the exposed brick has been worked in different ways to give texture and colour to each exterior and interior space. Sifted walls, curves, portholes, function as compositional elements, allowing the mutation and the play of light during the course of the day. A vertical garden made with the brick houses plants at the entrance to the complex, filling it with life and warmth.