Save
House in Peruíbe / Vereda Arquitetos 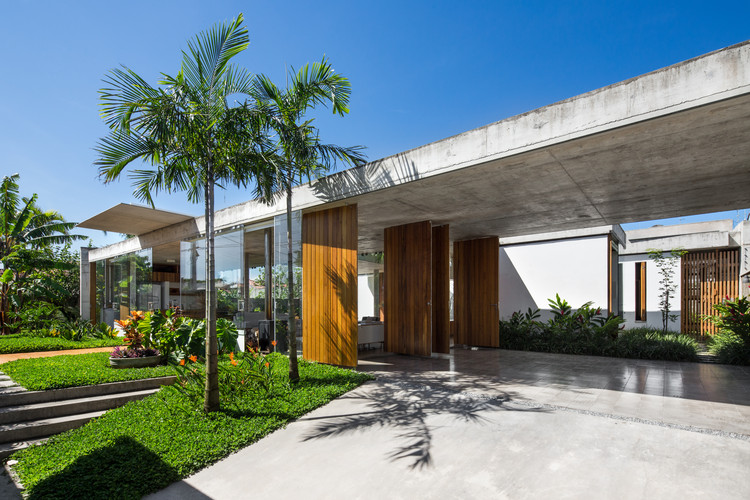 Text description provided by the architects. The design for the House in Peruíbe begins with an existing house, very precarious from the point of view of its conservation. Above all, this existing house lacked the enjoyment potentialities that the site and the condition of being very close to beach offered, even though being in an urban lot and the house not being just for vacation.

Thus, all the effort of the project is in the construction of this place of enjoyment  in the integration of the interior and exterior and, at the same time, the integration of daily activities with those typical of the summer seasons, the pool, the parties. All the activities happen overlapping each other, without repetitions; for example, the dining table is one for everyday use and for the barbecues as well.

The project's distribution sets up a block for the rooms, taking advantage of existing masonry,  and builds a new pavilion for social areas. The block of the rooms is more enclosed and has more intimacy while the living room and the kitchen are completely transparent and open to the outside. As a result, the ‘small’ 160m2 house appears much larger visually, with the gardens participating in the internal dynamic of the house. Between those two contrasting blocks it was built a work space that is also used as a guest room.

Four pivoting wooden panels divide the living room and the garage. They can be open to join these two spaces for gatherings or to improve ventilation; the garage is then transformed into a veranda. The way the house was built is quite simple in its final configuration, a single concrete slab with inverted beams and supported by pillars distant from the enclosures. This configuration frees up the entire facade of the house that is made with glass without frames. Similarly, in the rooms, the slab is not supported by the old masonry so as not to carry a fragile and unreliable structure.

The neighboring lot, a city's former access lot, has also been landscaped and contributes to the amplitude and configuration of the house in its place.