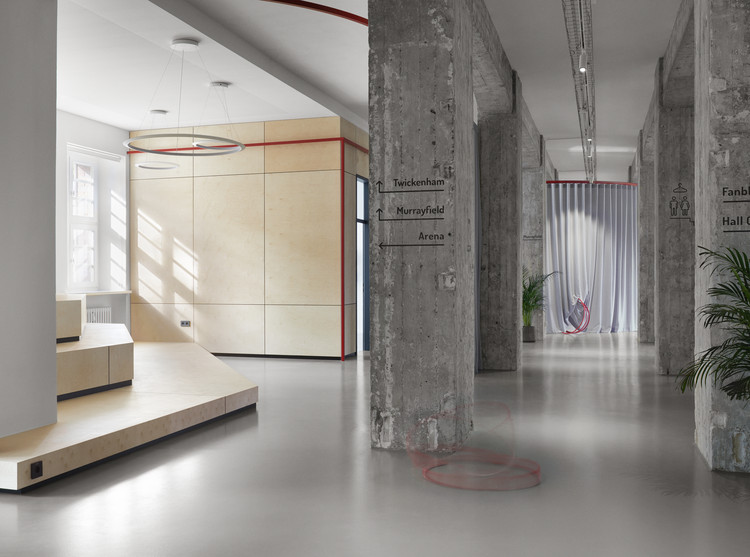 Text description provided by the architects. The former post office building made of red brick in Berlin’s Skalitzer Strasse, a historic listed building, has become a new and lively site for innovation. When designing the Co-Working and Event-Space Digital Hub SPIELFELD, LXSY ARCHITEKTEN focused on revisiting the history of the building. Selected historical elements have been incorporated into the design, in cooperation with the heritage protection agency.

The main focus of the heritage protection agency in the Digital Hub SPIELFELD was the former hexagonal post office counter hall. As the new location emphasises exploring digitalization, the interior space is shaped by the fixed position of a stage and surrounding break-out areas for workshops, which are divided by curtains, meaning that it can be flexibly divided as needed. The entrance is via the new foyer, which following a reworking of the ceiling also has the original hexagonal shape. The publicly accessible area includes an open café, meeting rooms, flexible co-working areas, and a lounge area with seating steps.

The heart of the area is a bar counter with red tiles in a zigzag profile. Next to the foyer, there are corporate studios, which are temporarily rented out to external companies. In addition to the five offices, there is a small meeting room, a workshop, and a seminar room, a large conference room and a kitchenette. Open niches and cabins containing telephone boxes, meeting areas, storage space, and open structures will be placed in front of the studios. The clear zoning of corporate studios, the "front garden" and the corridor creates additional spaces which can be opened or closed to each other to foster communication as well as concentration.

Carefully selected materials, geometric structures, and a powerful recurring colour scheme create a minimalist appearance with a raw industrial character. Space defining elements take the form of boxes clad in birch wood, which cover a discreet black grid. The linear design is extended in the surrounding red steel lines that run through the rooms. Based on the markings of a sports field, these were lifted from the floor to the ceiling, creating a space-filling element. The steel construction serves as a curtain rail and as a design element. The surrounding curtains provide visual separation and the textiles also improve the acoustics. The rooms can be individually combined or connected, depending on the situation. Different zones offer flexibility and a range of possibilities for living and working, inviting users to move around and interact with one another.

The recurring colour concept consists of a historical pigeon blue shade as well as the striking rust and fiery red tones. Birchwood elements and the light linen-look curtains stand in contrast to the otherwise hard surfaces. The stone grey floor and selected materials complete a modern look for contemporary work. In the office and event rooms, established companies and start-ups meet for inspiration, cooperation, and discussions about digital transformation. An open environment promotes this interaction, sparking creativity, and sharing knowledge within the community while experimenting playfully with digitalisation. 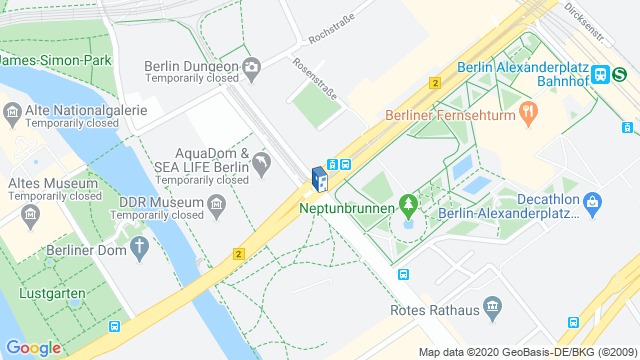