Save
Barn Rehabilitation in a House / G+F Arquitectos 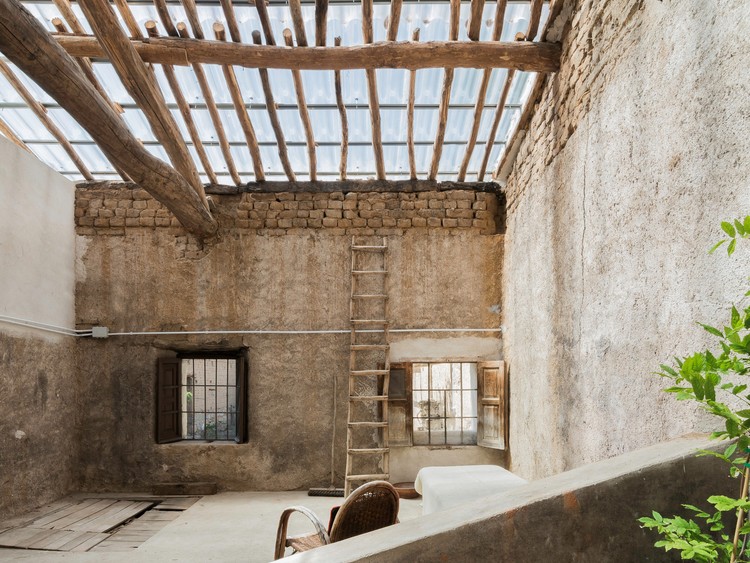 Text description provided by the architects. An agricultural and livestock building of the early twentieth century located in a town on the Castilian Plateau of Spain has been deprecated. The intervention in the existing building is considered as recycling of it. It is intended to preserve the identity of the productive space and the vernacular character of its construction.

To re-inhabit the main building it is provided with light, water and heat. It is intended to live the different spaces according to the season of the year. The creaking of the barn seeks to preserve thermal energy through the inertia conferred by the adobe wall. The envelope is completed by protecting the cover with insulation and waterproofing by means of a sandwich panel that incorporates all the solutions. Placed between the old tile and the structure of logs and wooden shingle board this technical solution goes unnoticed.

A skylight on the staircase, changing the corrugated panel with a polycarbonate panel illuminates the upper and lower space due to the lightness of the steps of the wooden stairs.

A lightweight slab of exposed metal joists and sandwich panel is introduced to take advantage of the free height, without altering the original volumetry, but maintaining the total height at the two ends of the barn, with the staircase to one side and a children's room in the other.

This first crack is the coolest area during the day in summer and that is where the heat produced by a wood stove in the winter is best preserved.

The second bay, where the cellar was, had three wooden trusses. Due to the leaks, one of them was rotten. It is decided to remove it and open a central courtyard that generates an outdoor space close to the kitchen, which allows you to enjoy meals in summer. On both sides of the courtyard, bright spaces are achieved that contrast with the small hollows of the old barn and allow the creation of winter gardens and living areas in the colder months. This is possible because the old tile and part of the shingle boards are replaced by cellular polycarbonate panels. It seeks to lighten a structure with symptoms of exhaustion and generate a covered space in which to perceive the light variations of the outer space. A membrane space, between the exterior and the interior, a deprogrammed place to be used more freely than a dwelling.

Thus, an unused and deteriorating container is recycled to become an inhabited space again.