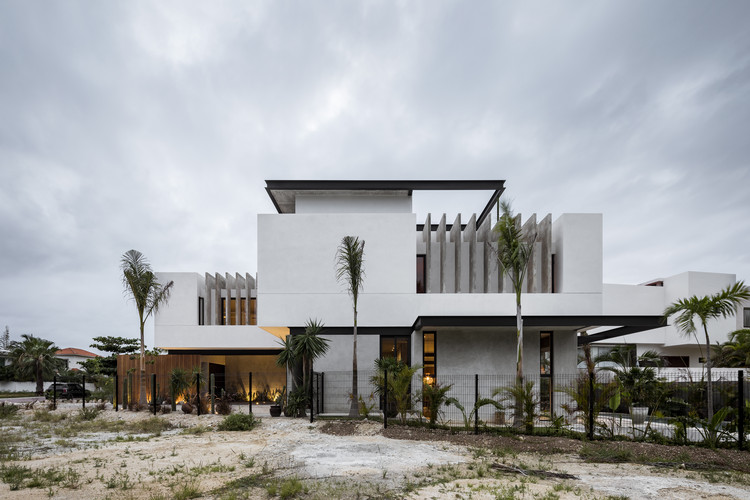 Text description provided by the architects. Casa Romantica, named after the street it is located on, has an ideal connotation for those who inhabit it. It is designed for a family of four who appropriates the title with their personality.

The approach arises under the first conditioning factor, an irregular terrain characterized by a very narrow frontal access, from which the polygonal lines move away from each other. This results in an architectural solution that meets the objective of hiding the garage from the front view and allows to have a permeable facade that is sectioned into different levels.

The house parts from a central axis which distributes four quarters by means of the intersection of horizontal and vertical circulations in triple-height, distributing to all areas of the house.

The selection of interior materials becomes very simple by using polished concrete as the protagonist that takes over the house. It is spread over walls and ceilings and allows the tropical wood carpentry and the selection of furniture to stand out as elements of warmth evoking nature in a rustic and minimalist environment.

From the outside, a series of white volumes that distinguish the composition of the project can be seen, which rest gently on wooden and concrete foundations.

The building responds to the context and orientation by means of subtractions from which polished concrete partitions emerge playing on contrast and speaking of sequence and repetition, providing privacy to the interior.

The extension of the free terrain covered by gravel exhibits an arid vegetal palette that, together with concrete footprints, leads to certain intersections between the exterior and the interior, leading to a large pool configured as a trapezoid that emulates the Caribbean Sea for its hue and reflection.