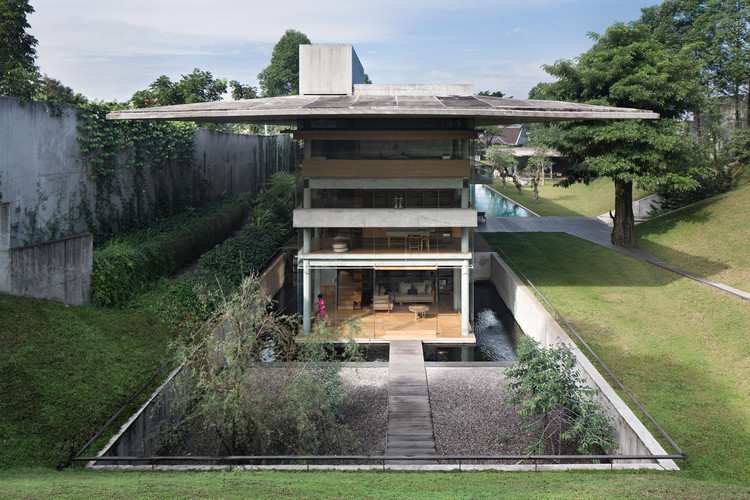 Text description provided by the architects. The IH Residence is located in Bandung, a town with a cool and crisp climate. This project came from a family with a large size of land (approximately 5600 m2), that wants to be turned into a family residence. The house would have quite an abundant amount of functions, but would still retain the vastness of the landscape. It was built in a neighborhood with low density, thus making it very possible to create a detached-house for the family.

The site elongates and slopes up from the south to the north. A third part of the land works as a service area in the front of the site, and a basement that has sunk 3 meters lower than the main part of the house. The design follows the nature of the elongated site by building a long large massing in the center of it, detaching it from any site walls to support the cross-ventilation along the building.

The large mass of the building is balanced with an optimal size of terraces, balconies, and wide pools that was built all across the perimeter. In an attempt to make the mass lighter, the facade is dominated by clear glass that also helps in welcoming the beautiful landscape around the site to the interior.

As a city, Bandung is prone to have a high rain precipitation every year, so in order to take on the rain and avoid direct sunlight, the house has a wide set of eaves that can go as far as 6 meters. Due to the site the circulation was designed progressively by using long ramps, while long corridors are aided with reflecting pools and direct view of the landscape. Green areas within the site could amount to almost as big as the house.

Through the sloping nature of the site, the building uses the landscape to its own benefit by playfully emphasizing the different height in spaces and varying circulations. The northern part of the site is higher than the rest of the site, defining the main building by enclosing it, and still creating a certain intimacy within the site. 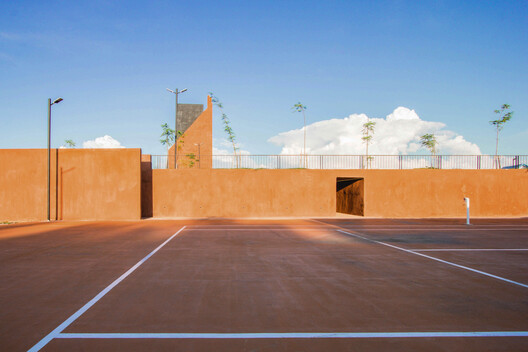 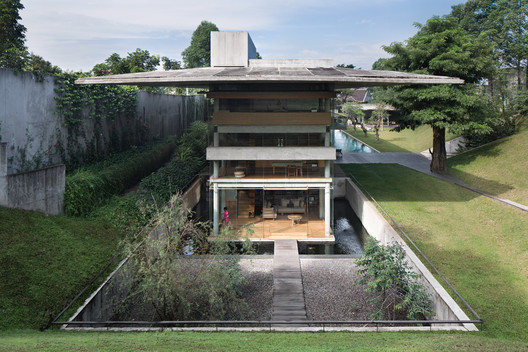