Text description provided by the architects. Set against one of the silent hilltops of Trivandrum, the site was located at the highest point in that particular part of the woods. The client was somebody who loved to travel and planned frequent escapades to distant lands, all over the country. The Himalayas had always caught his attention and intrigued him the most and he was lucky that his abode too would be just as reclusive, set into the lovely hilltop. However, being a west facing site one would have to hold up a hand to shield their eyes from the harsh west sun. That ‘hand’ was re-imagined as a slanting wall along the site giving birth to the concept of conceiving the residence as - Shikhara ( Peak)

The wall, brutal but a shade from the harsh heat and direct sunlight was to be made from the materials procured from the land itself, this being a prerogative of Wallmakers as we exclusively indulge in sustainable building practices. The soil procured by excavating the rainwater harvesting tank and the basement floor however presented an opportunity in the guise of a problem. The rocky terrain soil was filled with pebbles and debris which was deemed unsuitable for making mud bricks. Therefore, the patented technique of Shuttered Debris Wall was used here. Thus the slanting waste material wall and a view to withhold was born.

Since the major length of the building ran along the West side as a solid wall with small openings, lack of cross ventilation posed a new problem. After foraging in the market the answer rose in the form of Aluminium coin sheets that were perforated to let in light and air. A rhythmic undulating pattern was worked out on it so that this facade doubled up to become the staircase and answer the security concerns. The overall experience of living in this residence can indeed be compared to that of being in the mountains- Brimming with nature but also formidable, welcoming but reclusive and above all - a quiet viewpoint to view the countryside from.

Materials used in Construction - 1. Shuttered Debris Wall - This wall construction technique involves mixing cement, soil and waste materials of various sizes(coarse aggregate) ranging from 10mm -70mm skilfully to give a strong wall ( 5.2MpA compressive strength) What is waste? Waste can be classified as anything that was produced, used and then discarded from its original function. While the work and construction process results in the production of a lot of scrap, we believe in not being deterred by this demon and instead building with it.  2. Waste wood – Cut wooden scrap pieces have been joined to make furniture like beds kitchen cabinets, doors, etc. 3. Aluminium coin sheet – The perforated sheets of aluminium act as a semi-transparent screen, allowing us to have a clearer view of the exterior.  4. Cement Board – The interior bridge and the staircase treads are made out of cement fibre board with polish to finish. 5. Oxide – Floor and selected walls have been finished with grey and white oxides. 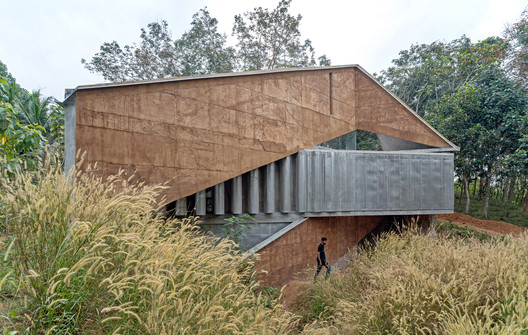