UNStudio completed two remodel projects in the Netherlands rethinking traditional glazing techniques. Located in Eindhoven and on the P.C Hooftstraat in Amsterdam, the projects each draw from their context and take inspiration from local history and culture. Made to restore and connect the two existing structures to their respective cityscapes, the projects are designed to restore the urban fabric as they connect to passerby. 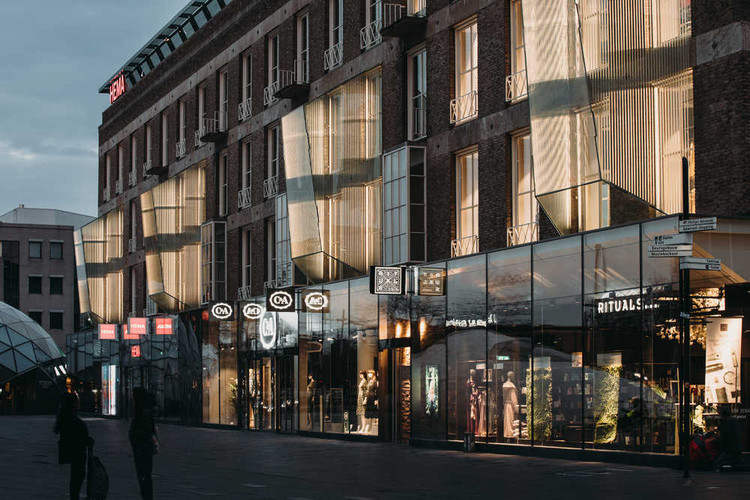 The four story, 18 Septemberplein C&A building remodel was designed a re branding and a modernization of the precinct. As the team explains, "reducing material use to create lightweight structures formed the starting point for investigating the use of structural glass in the refurbishment." Founder Ben van Berkel said that, “the use of glass in the C&A building not only creates a light construction, but it adds variation of depth to the otherwise flush plane of this historic facade. During daytime, the glass boxes act as ‘eyes’ to the public square, allowing the building to interact and communicate with the public, while at night the animated light installations suggest that the building is breathing as it illuminates the square.” These large glass additions take the form of a series of light-filled installations that are made to celebrate and complement the existing extruding windows on the north facade.

Likewise, the The Brick Pixelation Facade at the P.C. Hooftstraat was inspired by its local through intricate, crafted details epitomized by couture clothing. Cast stainless steel bricks with glass inlays were designed long the partially transparent facade to create a distinctive shopfront experience on one of Amsterdam’s best-known streets. The facade design uses cast stainless steel as its main material, and the traditional Amsterdam town house as its frame. The stainless steel bricks are cast in different sizes, following a similar pattern to the traditional brick facade on the upper levels. 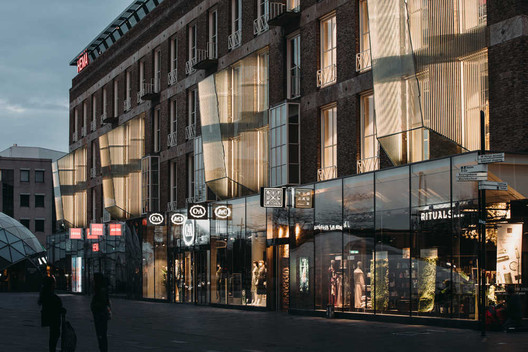