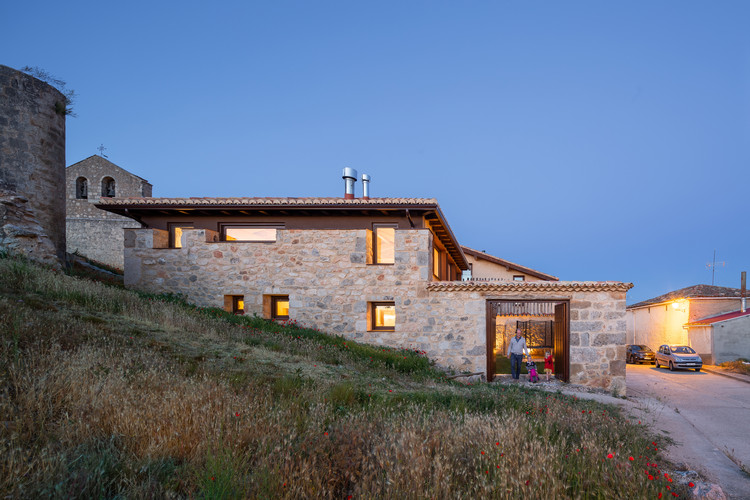 Text description provided by the architects. The house is located in one of many forgotten towns in Spain, where the small population that still remains is close to disappearing. However, it has a beautiful ruined castle and a Romanesque church. Very close to them, in a privileged location, the owner of this house decided to buy an old shed to rehabilitate it and turn it into his holiday residence. The location, a few meters from the castle, encouraged the preservation of the ancient stone walls and the design of the roof and much of the tiles of the old farmhouse.

The house is built behind these walls, opening large windows, from which you can see the stones that tell the story of the place. This material is combined with the concrete from the ceiling and the microcement of the floor that also speak of the natural and rough finishes of the field. In the middle of the floor, as if a hatch had just opened, a wooden ladder unfolds that calls for its ascent.

On the upper floor the roof design recalls the existing one. An interesting crossing of beams that can not be lost due to the need for compartmentalization, so it is decided that the opaque partitions reach only up to two meters high and the rest is completed with a set of glasses that allow the roof to be seen almost entirely from any room.

Some skylights are cut from in a way that you can see the bell tower, part of the castle and the sky, configuring a luminous space with warm materials, which opens to the horizon of the landscape. There is a beautiful contrast between this space and the space of the low level. 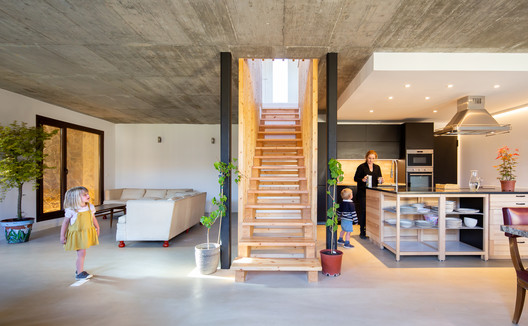