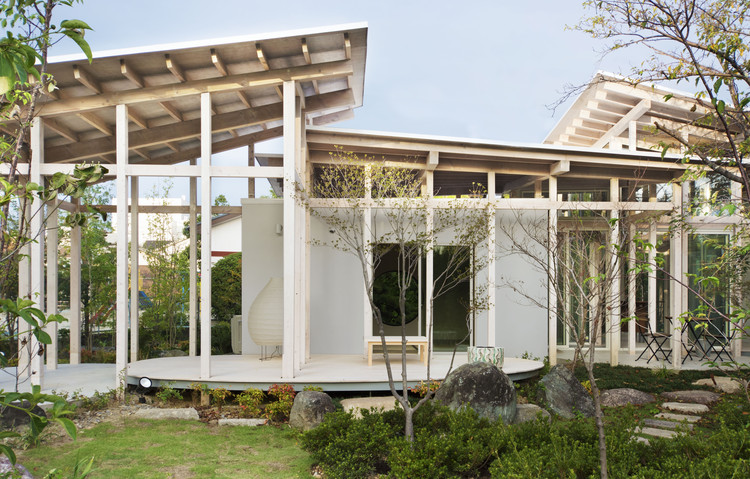 Text description provided by the architects. House surrounded by the Hedges」 by Studio Velocity is a Housing for married couples and children located in Aichi, Japan. The surrounding area is different from the well-maintained city-scape, and there is a narrow and diagonal road that remains from the old days, and you can see irregular sites. The site was irregular due to the proximity of narrow roads running diagonally. There are many houses around the site with fences and hedges. The issue was how to relate this to the spatial composition.

The existing hedge was just one layer high. Therefore, the whole living space was made into a one-story building (12.4㎡on the second floor) and the living space is surrounded by hedges. By having existing hedges take on the function of preventing visibility that the outer wall of the architecture originally plays, the outer wall can be finished with a transparent material. In addition, the height of the seismic core with walls is lower than that of the hedges, and the twelve large roofs that float the upper part allow the entire site to be felt from inside, making it a livable space. From the outside, hedges and core walls ensured the privacy of the inside, but also made it possible to see the view from under the roof, reducing the presence of the building.

The layout is large and scattered so that you can feel the various environments on the premises. Public places such as living, dining, music space and business negotiation space are located at the center, and private private rooms are arranged avoiding them. By arranging the large roof and the seismic core are shifted in both plane and section, we thought that the arrangement would be freely assembled from functions and structures, which would lead to freedom of life. The gap between the large roof and the core gives a glimpse of the future of the children, which will expand greatly. 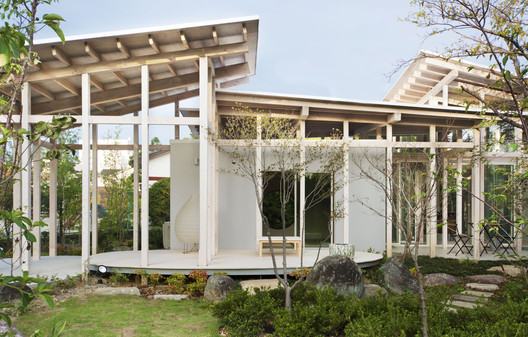