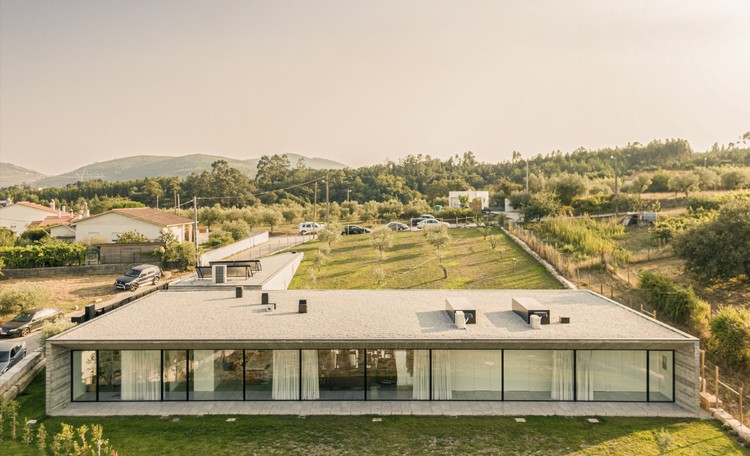 Text description provided by the architects. Tojal House is shy and bucolic, from a steep terrain surrounded by olive trees. In a torn gesture, it is born as an integral part of its landscape and  it leans over the valley towards the garden that surrounds it.

The challenges and requirements that guided the project went mainly through the question of solar orientation, the framing of the best view (North / West) and a concern with the couple's daily routine in a logic of different accesses, absence of obstacles and flow of circulation.

From a formal point of view, the single family house crosses the land from its highest to the lowest level, and, in an act of geometric continuity, it hides and reveals itself through the relationship it creates with the topography of the place. Its clean design always seeks a sometimes subtle and sometimes contrasting integration, in a game of full balance of this object built in the landscape.

The building on one floor is shaped like an "L". The entrance separates the two concrete volumes, one that emerges from the land and houses the garage and technical areas, and another perpendicular that occupies the total width of the lot but, given its permeable and transparent character, allows a complete continuity of the unfolding of the building. hill that crosses and at the same time it closes to the street and opens to the landscape.

The circulation is made by two parallel and opposite corridors of spatial articulation that extend the entire length of the house. An exterior corridor that is the porch on the south facade and an interior corridor that mirrors and accompanies the porch of the glass facade facing north. This solution allows for a fluid distribution that stimulates the dynamics of the house by providing a distribution through the spaces bathed in the sun and enjoying the generous views.

The program takes place along this central core, ensuring that all divisions gain equally from the solution created, thus standardizing the balance between sun, views, privacy and leisure. The large social areas, the kitchen and the bedrooms, take advantage of this direct relationship between facades. The house develops with a progressive character that evolves from technical and functional areas to social and private areas.

Outside, the slope of the blades maximizes the luminosity in the corridors and the concrete becomes the prominent material with horizontal lines that contrast with the verticality of the exposed wood elements that punctuate the facades.

The project assumes a simple plasticity, richness of details and striking details. It responds harmoniously to the need for spaces of comfort and tranquility that subtly fit into its landscape and topographic context without losing the poetics and personality that characterize it. 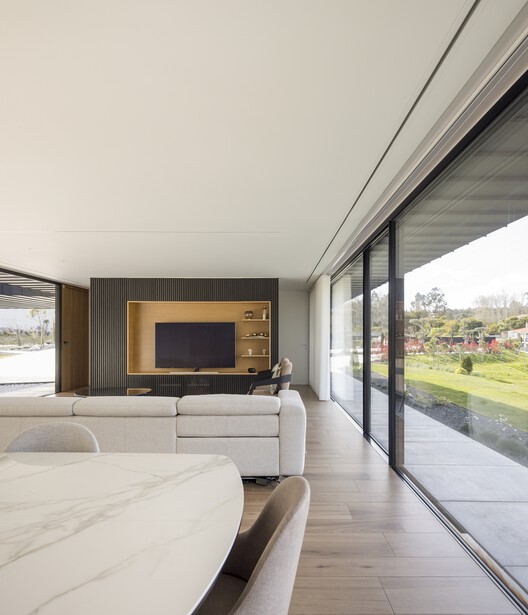 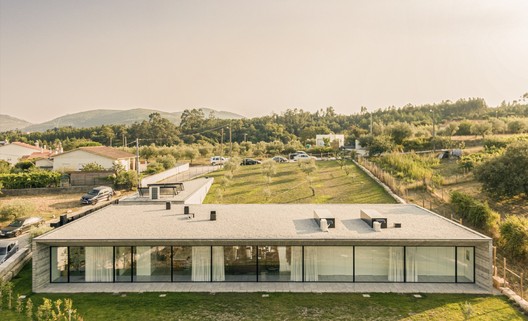