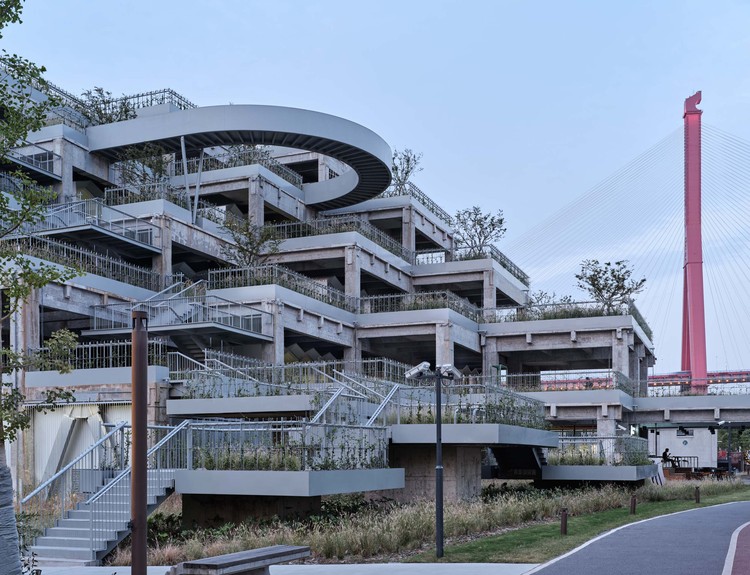 Text description provided by the architects. In March 2016, the Yangpu Riverside Public Space Penetration Project was in full swing. In order to forge the riverside landscape belt and open the waterfront shoreline to its urban hinterland, the tobacco warehouse near Ferry Ningguo Road is planned to be demolished. This is a six-story reinforced concrete frame slab building that was built within about 30 years and lacks both technological value and obvious architectural features. The demolition of this building seems to be without doubt due to a major road crossing underneath in planning. Besides, its huge north-south volume running across the city and the river bank severely blocks the sight of the riverside landscape.

However, the opportunity is also contained in obstacles: the huge north-south volume that causes obstruction at first glance can be transformed into a bridge connecting the city and the river bank through the mass reduction; the seemingly irreconcilable contradiction between urban roads and buildings can be solved by grabing the characteristics of the concrete structure.

In the context of revitalizing industrial buildings and limiting development, after repeated consultations with urban planning departments and municipal construction departments, it was decided to retain the building for renovation and make it as a riverside complex including a collection of municipal infrastructure, public green space and public supporting services.

In order not to affect the route of the planned riverside road, the walls of the first two floors in the middle three spans of the tobacco warehouse are tore down to meet the height and width requirements for municipal roads. This opportunity is also used to establish public transportation on the ground floor of the building, weaving it into the regional transportation network.

In order to reduce the sense of the six-story slab building on the city and the riverside space, the buildings facing the river bank and the city side are cut at an angle, and the pressure is reduced in two directions from the top of the building. Sense, while forming a layer by layer approach to the river and the hinterland of the city.

In the current situation, the green space on the north side of the tobacco warehouse is planned to extend the retreat from the city side to form a gentle slope, access the city, cover the slope with soil for planting, build a park, arrange parking and other basic service facilities below the slope, and let people know Kakuma strolled from the city to the river bank.

The upper half of the entire building is also covered with greenery, and is connected by a cantilevered staircase and slopes, as well as the river bank, making the entire building like a huge green bridge. The interior is subdivided to form "small houses in green hills", which are used for public ancillary service rooms. At this point, the city scale, building scale and furniture scale are unified in one building, forming a rich physical experience.

In order to introduce sky light into the interior, the gloom of the large-scale slab building was changed, and an atrium was placed in the center of the building and above the city road. The double spiral staircase also played a role in communicating the various floors. The entire building is connected to the city and the river bank at different heights and directions through a variety of transportation spaces such as urban roads, ramps, stairs, and double spiral atriums.

The transformed tobacco warehouse has become a "green hill". By vertically dividing roads and public service facilities, and arranging three-dimensional greening, it has opened up the barrier between the city and the riverside, realizing the sustainable use of existing buildings. It serves as one of the best responses to decrement development. 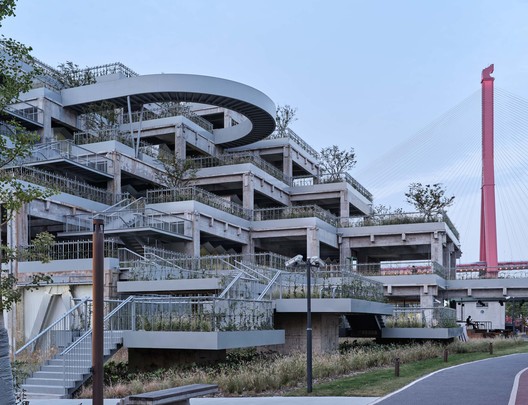