The inanity of the architectural “Style Wars” was in full flower this week. Treating architecture as civic wallpaper—with “Traditional” and “Modern” veneers viewed as criteria for moral judgment—has been a battle between true believers of both sides for a century. Those fears found a fresh voice this week.

Earlier this week Architectural Record published a new memo calling for a redraft of the federal order “Guiding Principles for Federal Architecture,” first issued in 1962. According to Record, the new order would ensure that “the classical architectural style shall be the preferred and default style” for new and upgraded federal buildings. There would be a new “President’s Committee for the Re-Beautification of Federal Architecture.”

Since Justin Shubow (the president of the National Civic Art Society) was appointed by the Trump Administration in 2018 to the U.S. Commission of Fine Arts, there had been a sense in architecture that politics was drifting into aesthetics, and this news was greeted as wish fulfillment by some, and fear by others.

Reaction to the Record article was swift. The AIA chimed in: “The AIA strongly opposes uniform style mandates for federal architecture. Architecture should be designed for the specific communities that it serves, reflecting our rich nation’s diverse places, thought, culture and climates. Architects are committed to honoring our past as well as reflecting our future progress, protecting the freedom of thought and expression that are essential to democracy.” The New York Times notes the new memo “would explicitly discourage some modern forms of architecture…in favor of classical design.”

In his essay “Why America Needs Classical Architecture,”in City Journal, critic Catesby Leigh writes that the “’Guiding Principles’ should be rewritten to affirm that classicism is the government’s ’official style,’ Not every new edifice has to be classical, but this should be the default idiom nurturing an appropriately legible and symbolically resonant federal architecture.”

In the Trump-era of fierce polarization, this aesthetic radicalism perfectly fits the zeitgeist. Culture, however, is not religion, but the two have been conflated in our past. The Puritans knew that Britain’s culture was not theirs, as the radical extremes of the Reformation overwhelmed the relative tolerance of England’s state church, Anglicanism, to the point that those reactionaries endangered life and limb to make their religion, their culture, in the New World.

Are architects Puritans? Despite the fact Architectural Record has ceased publication of any but “Modernist” homes in its Record Houses issue for a generation, Record’s editor-in-chief, Cathleen McGuigan cited Senator Daniel Patrick Moynihan’s words from the Guiding Principles: “an official style must be avoided,” and that “new buildings should reflect their time. Design must flow from the architectural profession to the government and not vice versa.”

Design should not flow from Record, or the AIA, or Justin Shubow either. There is no heresy in architecture, because architecture has no Canon: only a presumed declaration of “right” and “wrong.” Architecture is judged by the society that lives with it. Whether it’s Architectural Record, The American Institute of Architects or The President’s Committee for the Re-Beautification of Federal Architecture, there is no one true way, no Church of Architecture.

But there is an inevitable truth in what humans find beautiful. It is subjective and highly idiosyncratic, but ineffable. If Modernism or Traditional architecture were evil, none of us would completely break when they walked along the Vietnam Veterans wall and ascend the nearby steps of the Lincoln Memorial in Washington DC. The tragedy of war and death is deeply embedded in both. Everyone feels it, not because the architecture “evokes” it, but because that architecture channels the human reality of war.

There is no war in architecture, but there should be meaning and beauty. Dictating the terms of beauty, sanctioning a state style, is the essence of authoritarianism. 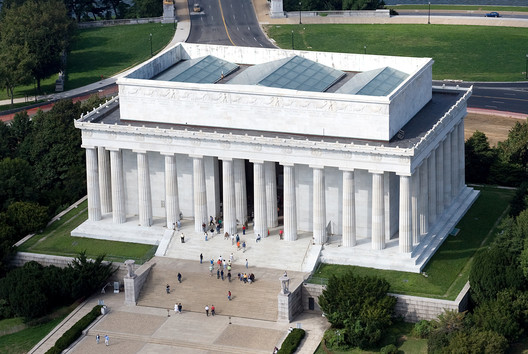