MVRDV has revealed a renovation scheme for the Tripolis office complex in Amsterdam, originally designed by Dutch architect Aldo van Eyck. Entitled Tripolis Park, the proposal that will accommodate the offices of Uber, will also enlarge part of the existing space, add an office block and a new park. 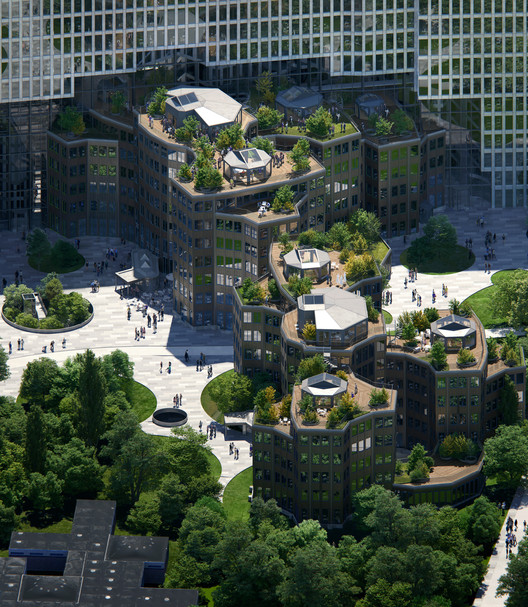 Never proved commercially successful, the Aldo van Eyck's Office building, required a much needed revamp. Aiming to preserve and revive the Municipal Monument, the MVRDV proposal embraces the original structure. Creating a “sheltering screen to protect the complex from noise created by the adjacent highway”, the new addition is scheduled for completion in 2022.

The first day I entered Bouwkunde at TU Delft, I saw a packed lecture given by an old man, yelling with a plastic bag over his head, protesting against Carel Weeber and the other Rationalists in architecture those days. I thought, ‘Ah! This is the place to be’ and copied all his books the following day. So I am a fan of Aldo van Eyck's oeuvre and I think we should treat his design as respectfully as possible. -- Winy Maas, MVRDV founding partner.

The new 11-story office block follows “the shape of the site’s southern boundary”, and “is indented where it meets the existing buildings, adapting its grid structure to the complex geometry of Van Eyck’s offices”. An interior public route separates the new and old structures, and in-between gaps hold circulation cores with bridges and stairs, covered in glass. A high-transparency eight-story window showcases the relation between the existing part and the new addition. Aiming for a BREEAM Excellent certification, the latest construction includes a green roof.

The new building guards and shelters the existing Tripolis complex as it were, thanks to the protective layer we create. We literally echo Tripolis, as if it was imprinting its neighbour. The space between will be given a public dimension and will be accessible to passers-by. As a visionary in his time, Aldo already saw office spaces as meeting places. I want to continue that idea by promoting interaction between the two buildings in various ways. -- Winy Maas, MVRDV founding partner.

Regarding the renovation works, some key features will be retained, such as the natural stone floors. For efficiency, “office spaces will be given a high-quality, industrial feel, while the roofs will be greened and activated with roof gardens and spaces for catering”. On another hand, Uber, will move in and occupy the lower floors of the new building and the largest building of the original Tripolis complex. The second-tallest building will be transformed into affordable rental apartments in a later phase of development.