The National Railway Museum and Malcolm Reading Consultants revealed the final concepts for the new Central Hall, created by five small to medium-sized international and UK practices. Shortlisted in November 2019, the 5 teams include a collaboration between 6a architects from UK and OFFICE Kersten Geers David Van Severen from Belgium, Atelier d’Architecture Philippe Prost from France, Carmody Groarke from the UK, Feilden Fowles from the UK, and Heneghan Peng Architects from Ireland. 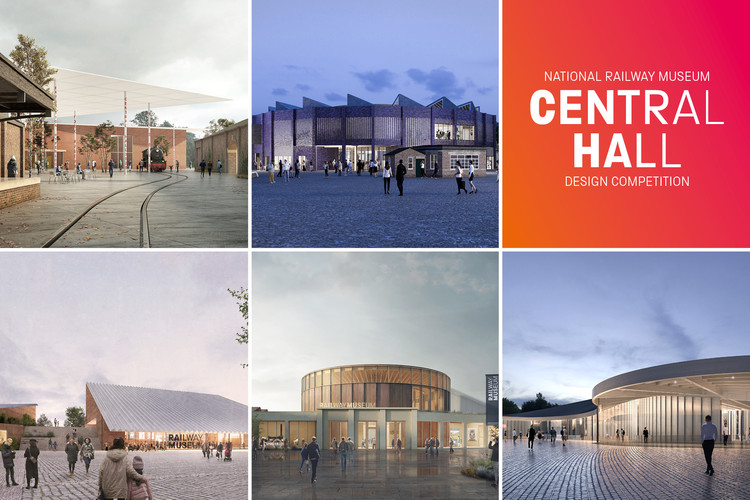 Located on a site dominated by railway heritage and infrastructure from the mid- to late-19th century, in proximity to the center of York, the museum is one of the most famous attractions in the UK. Scheduled for opening in 2025, in time for the gallery’s 50th anniversary, the proposed project will enhance the status of the existing structure that will become the world’s railway museum, with an estimated 1.2 million visitors annually.

In fact, the new 4,500 sqm Central Hall will “transform the visitor arrival experience with an appealing and compelling entrance space, integrating the museum estate for the first time in its history”. Hosting a 1,000 sqm gallery, the building will also showcase innovative technology and introduce the museum’s world-class collection.

I am very pleased to share the five design concepts for our new Central Hall which will showcase our collection and future innovations from the rail industry in an inspirational, purpose-built gallery. […] I encourage people to visit and to share their feedback. Although the final designs are some way off, the winning team will go on to create the final building which will be the cultural focal point at the heart of York Central -- Judith McNicol, Director of the National Railway Museum

With a brief that requested the creation of an environmentally sustainable and contextually sensitive Central Hall, the finalist teams were able to develop their design, during 3 months after the selection process. In fact, they were chosen from a field of 76 entries, based only on their past experience and team composition.

The Jury that will select the final winner consists of:

I am thrilled with the responses from all the finalist teams, which have exceeded our expectations in their variety and imagination. […] All five have offered intriguing takes on form and materials which respond to the brief in different ways, ranging from curvilinear to rectilinear shapes; which are by turns, strongly colored, sensory and tactile. […] I am particularly pleased that all five teams have taken seriously our ambition to create a sustainable building, which will be open for all, and be part of the landscape of this historic site. -- Karen Livingstone, Science Museum Group Director of Master plan and Estate

On another hand, the public will be able to share his thoughts and ideas about the projects on display at an exhibition at York’s National Railway Museum, until Sunday 23 February. The winner of the Competition will be revealed in March 2020.