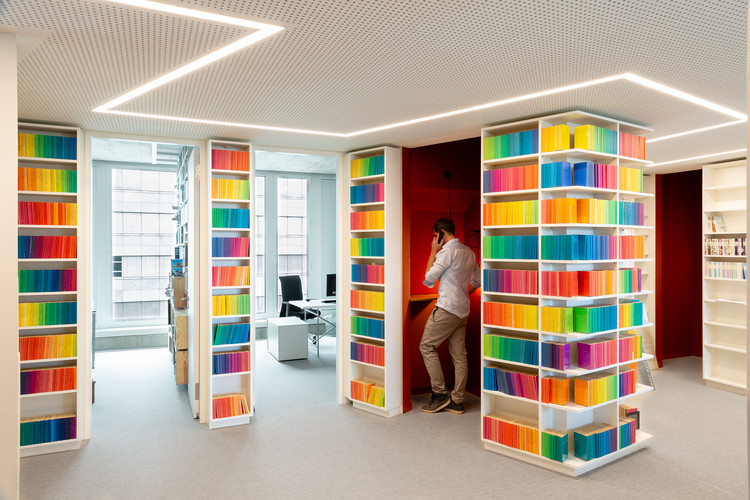 Text description provided by the architects. The modern new building, planned by Bundschuh Architekten, had not only the potential of becoming an important urban building block, but also to be in the best company of galleries, cafés, bars, and an art association, thus completing an exciting cultural quarter.  Of course, the main protagonist of the interior was clear to the design team at Kinzo: the book. Or rather the books. Or even more aptly: the thousands and thousands of books! Our vision was a house, which rests on multi-story high stacked volumes instead of walls and columns. As emotional and atmospheric building blocks, the books should form the supporting structure and at the same time be the daily working instrument. Accordingly, shelves had to be built, many shelves – these had to fill almost every free space on the walls while simultaneously replacing them. But how could Suhrkamp’s enormous book collection find enough space on the limited wall space? A new concept for the entire building plan pro-vided the answer: Kinzo divided the floor plan and let the walls meander through the 6 floors of the building in the form of a zigzag, like an inner facade. This idea not only created more wall space and thus sufficient shelf space but at the same time optimized the area of the rooms and created small niches - usable for all employees as retreat rooms for spontaneous meetings, communication islands, think tanks or telephone booths.

The stage undoubtedly also belongs to the employees of Suhrkamp, who play the second leading role alongside the books. Kinzo responded to all the spatial needs of the employees, including the editors, with a heterogeneous offer that is also reflected in the floor plan. Initially, it was a great challenge to accommodate all the desired editing rooms. In addition to there being less space available than in the former office, the layout of the publishing house over six floors instead of the previous two led to a shortage of space, since the room had to be provided for the access cores, corridors, and toilets on each floor. The conical, tapered shape of the building did not make things any easier for Kinzo‘s team. It was clear early on that the rooms for the editors had to be as small and efficient as possible. The result is rooms with an average of 9 m2; they are characterized by windows that are almost as deep as the floor and which allow plenty of daylight to flow in. Instead of appearing confined, the rooms convey a sense of security and concentration. The door of every editing room is designed to be flush with the shelf when opened and to almost seem to disappear into it. This enables the room to open up into the adjacent open space of the large office and, like a natural cove, becomes its extension. The large communal area of the office acts as a counterweight to the small rooms, as well as spatially allowing colleagues to work across rooms with natural communication at eye level when the doors are opened.

All other workstations unite in the open areas, which are lined with kitchenettes and conference rooms on the angular side of the building. These are characterized by a pleasant atmosphere, and the view through the large panoramic windows directed towards the bustling Linien- straße and onto Rosa-Luxemburg-Platz. One of the conference rooms features furniture on wheels, so the room can be repurposed as required. A custom-made whiteboard, which can be opened or closed as needed, conceals a large screen. The conference rooms and kitchenettes - and thus the floors - are connected internally via the so-called „narrative staircase“, which runs from the first floor at an oblique angle to the sixth floor.

The staircase received its name because of its impressive shelf, which follows the steep course of the stairs like a dramatic narrative thread. The oak shelf mirrors the materiality of the staircase steps. In the end result, Kinzo has optimized the relatively small space of the new Suhrkamp publishing house. Not only was it possible to integrate all the books and shelves into space, but it was also possible to create a space that was both tailored to the different requirements of the users and flexible at the same time. Although high-quality materials and products were used and many fixtures had to be custom-made, the solutions remained cost-effective and within budget. Through their work, Kinzo has proven their expertise in office interior design, which has grown over the years, and at the same time opened new doors by meeting the requirements and needs of a traditional publishing house, an institution of high culture. 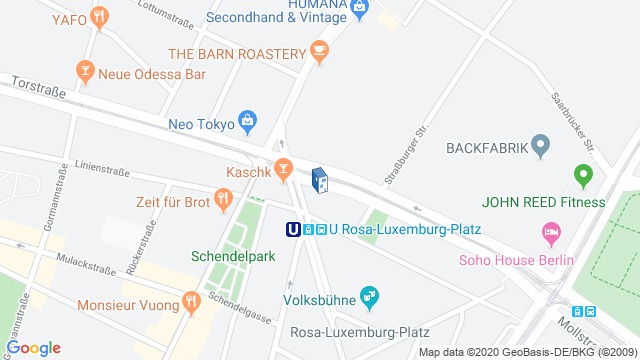 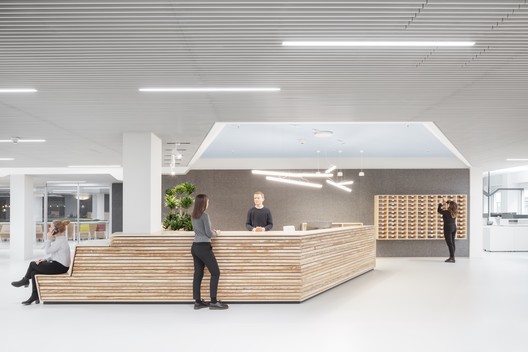 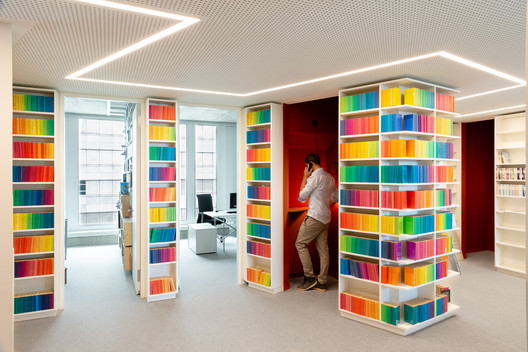