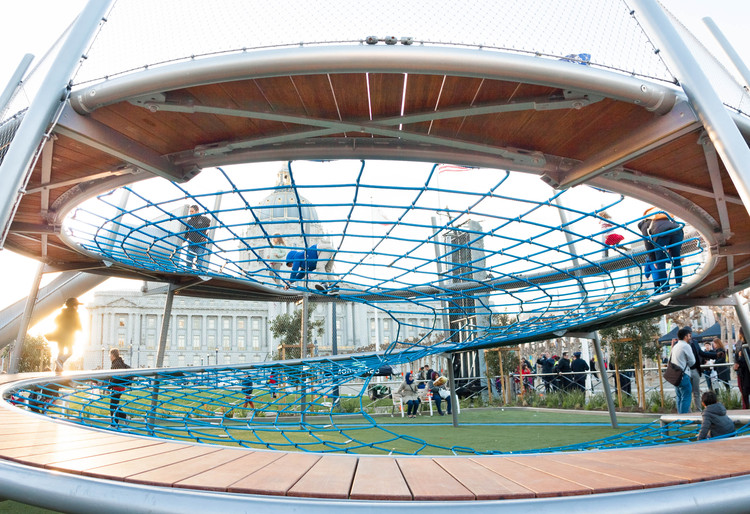 Text description provided by the architects. The award-winning Helen Diller Civic Center Playground is a much-needed revitalization of public space in the cultural core of San Francisco, resulting from a design collaboration between Endrestudio Architects & Engineers and Andrea Cochran Landscape Architects. Surrounded by City Hall, the Bill Graham Civic Auditorium, and the Asian Art Museum, the plaza is highly visible and active at all hours of the day.

The park focal points during are three expressive playstructures that were inspired by the often mercurial weather patterns of San Francisco: ‘Fog Valley’ lopes slowly along the ground, emerging from a ramp into a ladder and finally twisting into overhead monkey bars in a continuous loop. ‘Sky Punch’ spirals up above the park in an open helical sweep connected with a warping blue net, and descends in a graceful slide. The form of the net creates an invisible boundary in that children cannot fall more than a few inches off the path but it feels completely open, adding to the excitement of play. ‘Lenticular Cloud’ creates a layered world of blue mesh nets, where the challenge of finding new paths through to the enormous floating ring creates opportunities for explorative play.

Each structure emerged through a synthesis of parametric formal exploration, circulation strategy, and fundamental geometric principles. In this way the forces are resolved through form rather than solely relying on strength of materials, and the continuities required for stability create infinite loops of paths for exploration and excitement. The playstructures are complemented by traditional and unique elements, including the standbys of swings and playable terrain coupled with expressive features like the marble wall which conceals and directs exhaust vents from the massive parking garage below.

At night the park’s focus shifts to the nearly seventy Pixel Poles: stainless steel posts with built in LED display caps that are centrally controlled and fully programmable. The poles glow, flicker, and dance, joining in the hum and buzz of an evening at the Civic Center. In addition, artist Anticlockwise Arts programmed and installed interactive projections which respond to visitor’s movements as the pass through and around the plaza. 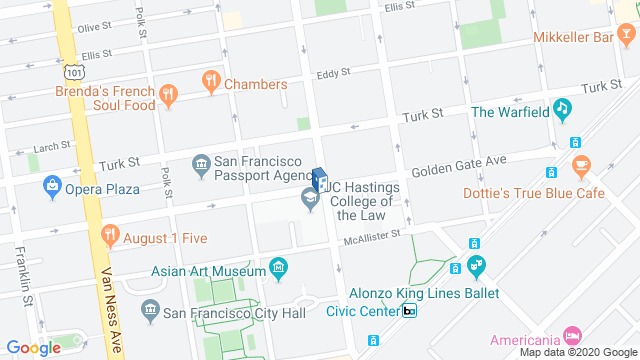 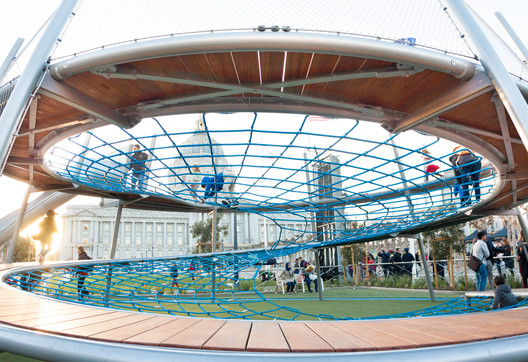