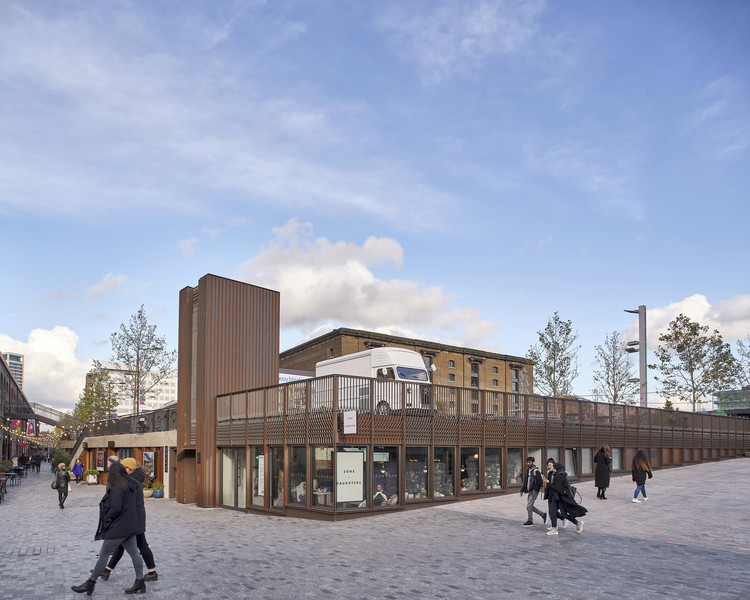 Text description provided by the architects. The new single-storey pavilion sits at a pivotal point within the King’s Cross masterplan - bridging between Granary Square and Coal Drops Yard. Set canal-side, just a short walk from King’s Cross station, the pavilion will sit beside the restored railway arches of Coal Drops Yard and an eclectic mix of stores. Designed by Bell Phillips for developers Argent LLP, the design accommodates a 105m2 café and public access toilets.

The spaces within the pavilion have been arranged so that secondary functions such as the toilets and plant are positioned within the depth of the plan, allowing greater activity along its peripheries. The café’s visible presence along the length of the southern façade creates a highly animated facade adjacent to the historic ramp while providing a visual connection to the urban plaza. The lift provides a visual termination to the south-western corner of Granary Square.

The intricately detailed façade constructed from cast iron as a nod to the site’s industrial past, adds an element of visual delight to the streetscape. In a further nod to the history of King’s Cross the cast-iron façade is designed using an abstracted pattern derived from the molecular arrangement of coal. The façade also functions as a balustrade, offering enclosure to the edge of Granary Square above. The cast-iron pattern reappears again as a motif on the lift shaft, which is illuminated at night to signpost its public function.

Bell Phillips worked closely with the landscape architects, Townshend who designed the urban realm surrounding the pavilion. The roof of the pavilion flows into the southwest corner of Granary Square. The design strategy developed by Townshend, therefore, seeks to integrate with the existing development; their timber benches have been designed to fit with those already in place in Granary Square, while hard landscaping and new planting create a seamless threshold between the two areas.

Sensitivity is a key element of Bell Phillips’ design, both in terms of the historical context and the visual impact. Through the design, Bell Phillips has maintained a strong visual link between Coal Drops Yard and Granary Square, enhancing the usability of the space and assisting with urban wayfinding. The pavilion sits quietly, but appropriately, within the context of the surrounding historic buildings while its subordinate to the historic ramp, underlines the ramp’s spatial importance transforming it into an experiential marker for the route into Coal Drops Yard.

The new pavilion is Bell Phillips Architects’ second public realm project at King’s Cross. The award-winning Gasholder Park – a public green space and contemporary circular pavilion set within the restored guide frame of a Victorian gasholder – is a hugely popular space on the banks of the Regent’s Canal, while a third pavilion by the practice is designed to sit within the emerging landscape of Jellicoe Gardens which is shortly due to commence construction. 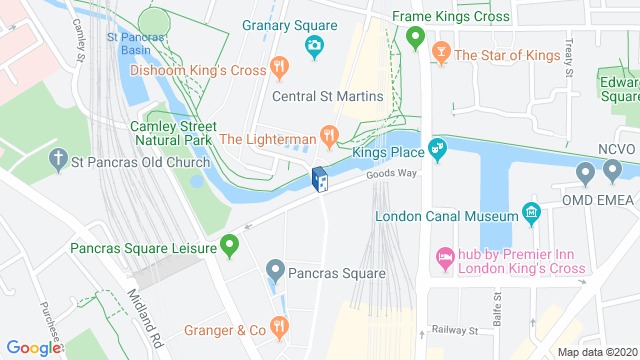 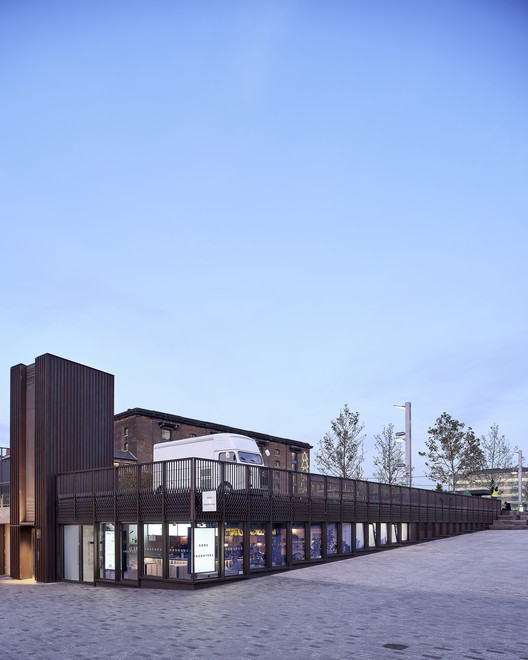