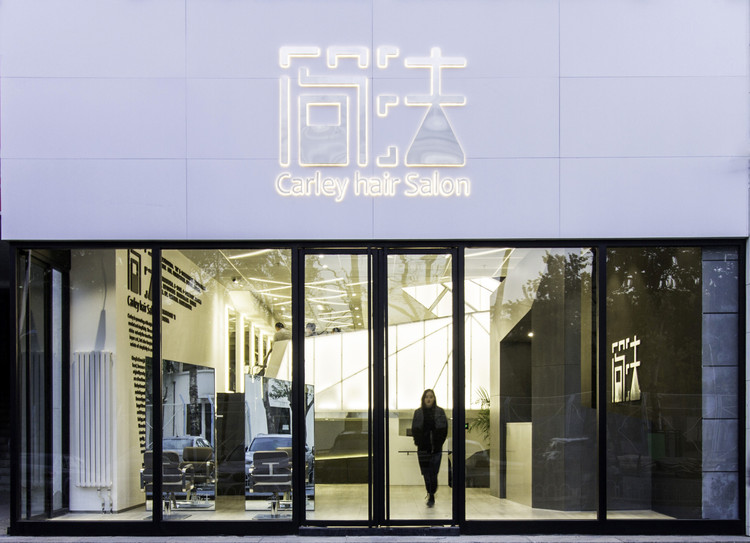 A Stadium Salon?!
Not often you get asked to create a high-end hair salon in a national soccer stadium.

In this case, our client found a site tucked under the grandstands of the Beijing Workers’ Stadium; one of the Ten Great Buildings constructed in 1959 for the 10th anniversary of the People's Republic of China. The Workers’ Stadium has since been the hosting venue for the 1990 Asian Games and a venue for the 2008 Beijing Olympic Games.

Bustling Entertainment District
In the past 10 years, the stadium and it’s surroundings have developed into a key entertainment area, located on the edge between Beijing’s historic city and the Central Business District.

The area, known as ‘gongti’ (工体) to locals, is now full of night clubs and restaurants, while the stadium itself has also been hosting pop-stars like Mariah Carey and Linkin Park. Our salon is located just beside Stadium Entrance 03, right opposite the new China Philharmonic Hall by MAD, which is currently under construction.

About the Client
Much like the Hollywood hairstylist legends of the 1930s, Carley Hair Salon （简法）is a legendary Beijing hair styling name, founded by Shi Hailun (史海伦).

The brand caters to celebrities and socialites and made a name for itself by promoting a self-lifestyle centering on comfort and simplicity. It takes hairstyling as a creative discipline, with “craftsmen taking all the flashy decorations out and concentrating the pure appreciation and joy of beauty”.

The Chinese name of the salon ‘jianfa’(简法) represents their work ethic, literally translating as ‘hairstyling without much decoration or ornamentation’. We aimed to translate this desire for comfort and simplicity into an immersive spatial experience.

Design Concept
We thus proposed a tiered design that is striking from the outside, but intimate and personal when inside.

Strong angles and a light feature draw you in. However, because of the location underneath the main stand of the stadium, the floor plates of the shop had a very strange configuration with existing structural members, spread along with four levels. The main challenge was to distribute the functions logically along with these levels, considering the workflow and customer experience. We’ve managed to tie the various levels together with an angled central light sculpture wrapping the stairs.

More than a Salon
The Stadium Salon is conceived as a four-level flagship store, also hosting the HQ offices and a multi-purpose training area.

As such, the brand experience should be communicated to various customers and business relations alike right upon entering. In addition, this flagship location is also used as a training location for stylists from any of the brand’s other locations. To not disturb the business flow of the store we have located this training area on the upper level, with a flexible arrangement that can be used for group training or company meetings.

Celebration of craft
A visit to the hairdresser is more psychological than one might expect.

In this prime setting, the salon becomes part of a night out, a place to see and to be seen. This state of mind must be facilitated by a salon’s interior.

Through its use of mirrors, light, and reflection, this dematerialized salon serves as a prominent showcase of the craft of hairstyling, brought down to its essentials, highlighted through a central sculptural object.

Main materials include a white painted metal mesh ceiling, to hide all the required HVAC, lights and sprinkler installations. The sculptural stair is made of translucent white acrylic panels, lit up from behind. The bar is a combination of brushed stainless steel and grey cement boards. 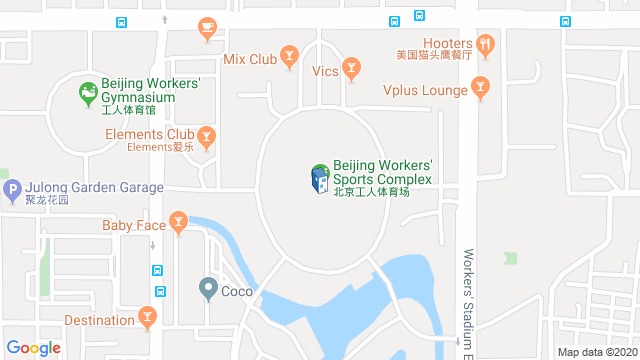 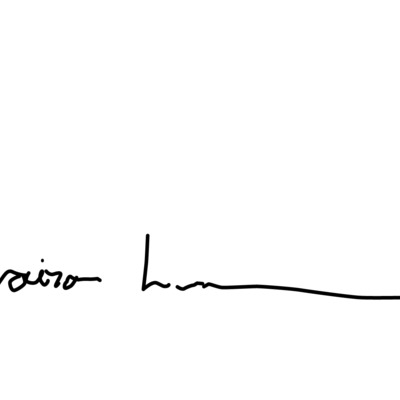 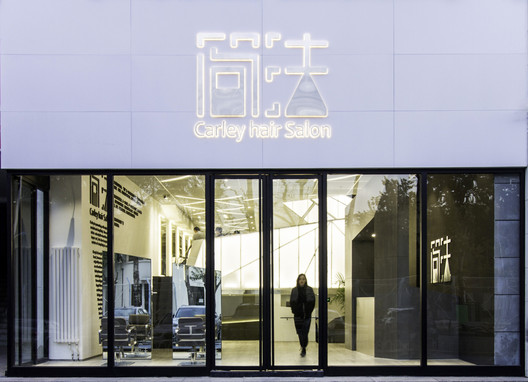