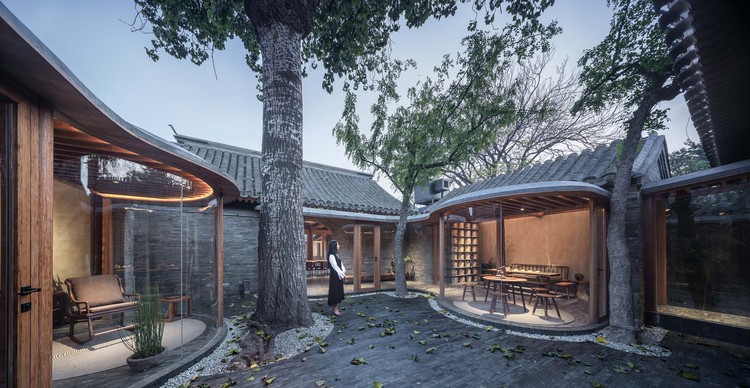 Text description provided by the architects. The renovation project is located in a huton within a core old quarter of Beijing. It's a small Siheyuan (a typology of traditional Chinese residence) with three courtyards, with a total length and width of 15 and 42 meters. It's named as "Qishe" ("Qi" and "she" respectively refers to "seven" and "house" in Chinese language), because its address number in the hutong is 7 and it originally consisted of 7 pitched-roof buildings. The Siheyuan before renovation was old and dilapidated. The basic wooden beams and some arched door openings featuring the style of the Republican era were relatively well preserved, while most of the roofs, walls, doors and windows were badly damaged or disappeared. In the three courtyards, there were many temporary architectural blocks inserted many years ago. After demolishing those blocks, the yards were filled with waste of construction materials and overgrown with weeds, presenting a bleak view.

As approaching the project, the design firm ARCHSTUDIO set two goals: renovating the old and inserting the new. On the one hand, the designers neatened the houses, repaired all the building surfaces, and reinforced the architectural structures, with a view to reproducing the appearance of the traditional Siheyuan. On the other hand, they brought in new living facilities such as bathroom, kitchen and garage, HVAC pipes and lines, as well as new veranda spaces. The old and new are integrated into a new whole, to better meet future functional demands of reception and living for the compound.

ARCHSTUDIO embedded a veranda — a basic element of traditional Chinese architectures, into the old Siheyuan to link up the seven separated pitched-roof houses. The veranda functions as a circulation route, reshapes the spatial pattern and layers, and provides a playful walking experience as well as fantastic views.

The front courtyard is mainly used as a garage. ARCHSTUDIO retained its pitched roof, removed the front and back walls, and shifted the entrance door to the side, so as to leave more space for parking. The design team restored and preserved many valuable historical elements such as the gateway and carvings of the arched door opening, and even a dry tree. In addition, the wall between the front and middle courtyards were dismantled and replaced by a transparent veranda.

The veranda features a curved plane, and presents variations according to different landscapes and spatial functions. It's closely combined with the curved edges of the pitched roofs, hence forming several arc-shaped transparent spaces, which integrate the houses, landscape and the sky into the same picture. In the front courtyard, part of the veranda's roof was bended downwards to form a curved wall, behind which are some functional spaces, including the washroom, service room, equipment room and so on.

The middle courtyard is a public activity space. It previously contained three houses, one on the north, two on the sides. Based on its original layout, ARCHSTUDIO set a living room, a tea room, a dining room and a kitchen, etc. in this area. The designers adopted a symmetric spatial pattern, which inherits the sense of formality of traditional courtyard buildings. Besides, they replaced the former stairs that led to houses with gentle slopes. The slopes and the transparent veranda together enhance the connectivity between the indoor spaces and the open courtyard. The dining room has a folding door, which can open the interior to the outside space completely and extend indoor activities to the courtyard as well. At the middle of the dining room's back wall, there is an arched door, which was restored and becomes the entrance to the back courtyard.

The back courtyard is a dwelling space, mainly consisting of two bedrooms, a tea room, and a study. Its original layout is the same as that of the middle courtyard. The veranda in this area has an undulating plane, which interacts with the three old trees that already existed in the courtyard and at the same time forms several small arc-shaped leisure spaces. The bedrooms are set at the backmost area, featuring a symmetric spatial layout based on the roof ridge. The bathroom in each bedroom is adjacent to a small yard, which ensures ample light and ventilation.

The material scheme of the project well combines the old and new. ARCHSTUDIO preserved the textures of traditional architectural materials whilst adding some new materials in an appropriate manner, so as to retain the marks of time, and present the contrast and fusion between the new and old. The original pine wood framework of the Siheyuan was maintained, with its damaged components replaced by the same material. The new veranda, doors, windows and some furniture utilize laminated bamboo panels (a new material that looks like wood and feels like steel), which echo with the old pine wood. The newly built veranda adopts a frame structure, with ribbed beams and panels on the ceiling, in order to maximize transparency and lightness as well as to better blend into the old construction. As for interior design, ARCHSTUDIO brought in various combinations of furniture made of old or new wood, which shows perfect mix of different hues and textures.

The traditional pitched roofs used no modern waterproof materials and had poor thermal insulation. Considering this, ARCHSTUDIO optimized the roof system and performance on the premise of retaining the original gray tile rooftops. As to the curved roof of the newly built veranda, the designers utilized polymer mortar as the finish, which is smooth and forms contrast with the adjacent textured tile rooftops. The old building walls were restored, by reusing the gray bricks from demolished temporary architectural blocks in the courtyards. The floor of outdoor spaces is paved with the same type of bricks, to ensure visual consistency. Some of the new walls are formed by glass bricks, which have the same size as the old gray bricks. During construction, some stone slices, crocks and a millstone were found unexpectedly, which were later reused as stairs, flowerpots and adornments. The wooden beam waste from the architectural renovation was utilized to make chairs, which gives old materials new life. 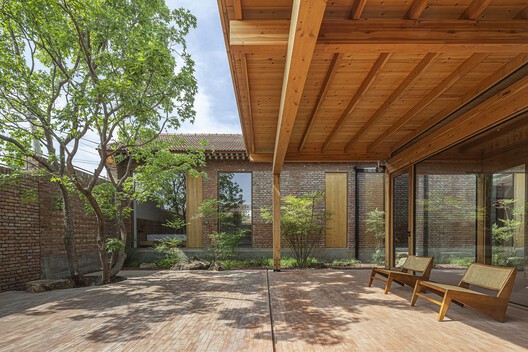 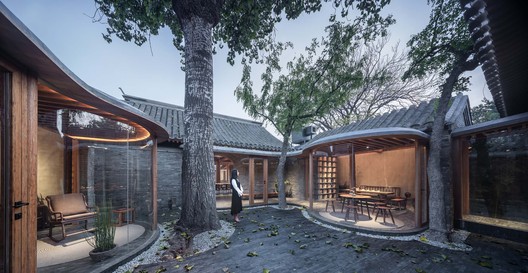