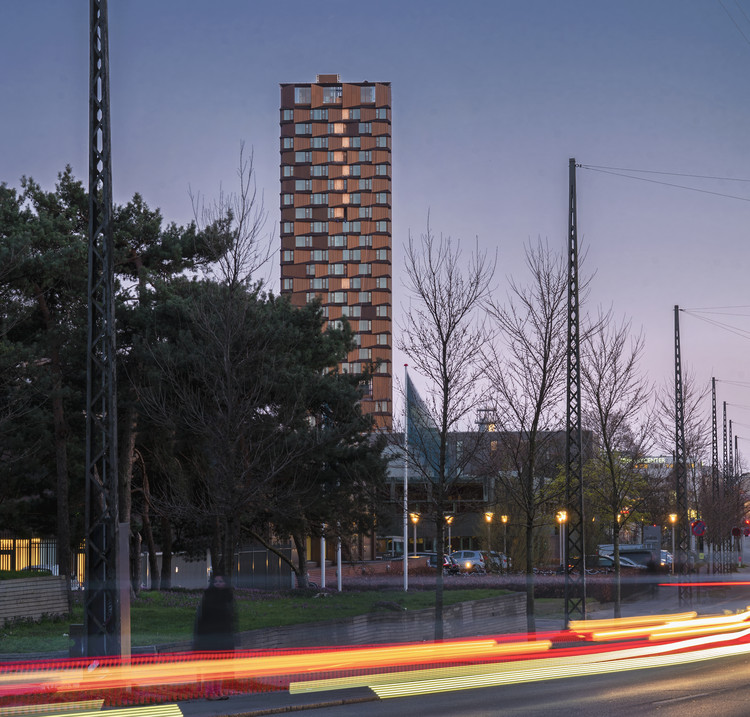 Text description provided by the architects. The Nørrebro neighborhood is the melting pot of Copenhagen, characterized by an extremely diverse mix of residents, including many newcomers from other countries. There is a multitude of shops selling food from all corners of the world, and many different languages are spoken in the street. However, many steps have been taken in an attempt to open up the district and make it safe for everybody. One such initiative is the construction of about 500 student flats at its heart – the Nordbro complex. The aim of the project has been to derive the greatest possible value from creating a dynamic and vibrant scene for young people, to make it attractive for residents and non-residents to live and visit Nørrebro and to create a landmark for all Copenhageners.

The result is something as unusual as a high-rise building with affordable housing on all floors. For example, a flat designed for flat-sharing and offering good views in the tower is the cheapest flat pr person in the complex. Many of the flats are designed specifically for shared living, for example for flatshares between two or three people, either students or young couples studying in Copenhagen.  Moreover, many of the studio flats come with access to a communal kitchen shared by, for example, ten residents, an arrangement typical of student accommodation in Denmark. The tower block has a wide variety of flats intended for students and guest lecturers, such as from the University of Copenhagen.

Several of the large flats on the top floors are particularly suitable for young students with children, visiting scholars with their families or collectives. Nordbro is built on a large unifying base with multiple outreaching and communal functions on the ground floor. From here, five tower blocks rise up along the street, Borgmestervangen. Round the corner, there is another tower block and a 100-meter-high slim and elegant tower that reaches to the sky as a landmark for the complex and for the district as a whole. At first-floor level is a large communal roof-top garden – open to residents and featuring lush verdant landscaping, seating arrangements and room for outdoor pursuits. At first-floor level is also a building with communal facilities and with direct access to the roof-top garden.

The tower blocks are built from reddish-brown brick – historically a popular building material in Copenhagen – with balconies in anodized aluminum and varying in height between six and seven stories. The blocks contain different-sized flats and shared facilities such as kitchens, communal areas, and roof terraces. The tower block is 100 meters high and has 30 stories. The façade is clad in specially designed anodized aluminum panels, distinctly combining smooth horizontals with profiled verticals for a beautiful relief of light and shadows, smoothness and structure. At the top of the tower is a viewing platform – open to the public and offering unique panoramic views of Copenhagen, and on clear days to points as far away as Roskilde, 35 km to the west.

To prevent the complex from closing in on itself as a place for students only, the communal facilities – like the reading room, launderettes, entrances, bicycle parking, fitness facilities, and assembly hall – are placed at street level and with glass façades along the street. This contributes to opening up the complex to the local neighborhood. Also, a café has been established which is open to the public and which also invites people living in the neighborhood inside. The viewing platform at the top of the tower is also open to the public as a way of attracting visitors from far and near and ensuring that more people get to know the district and develop a sense of community with the Nordbro residents. 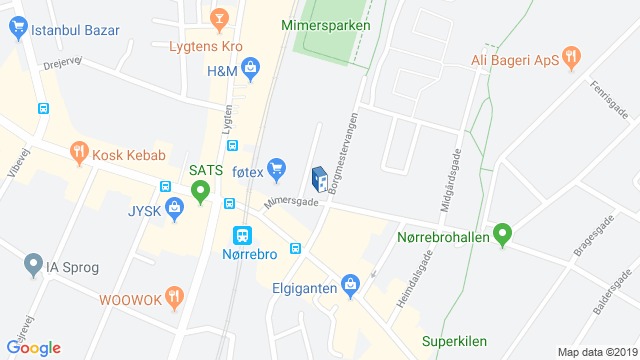 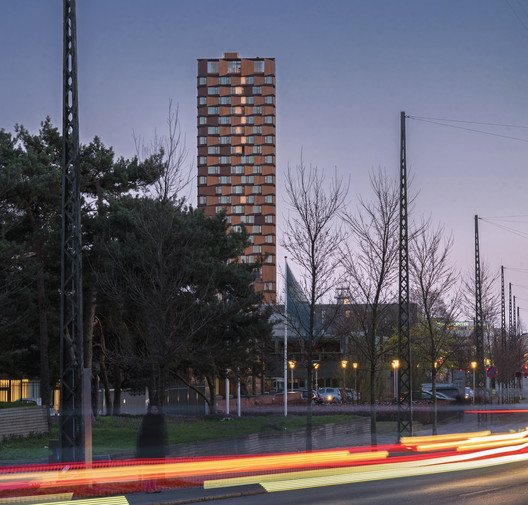