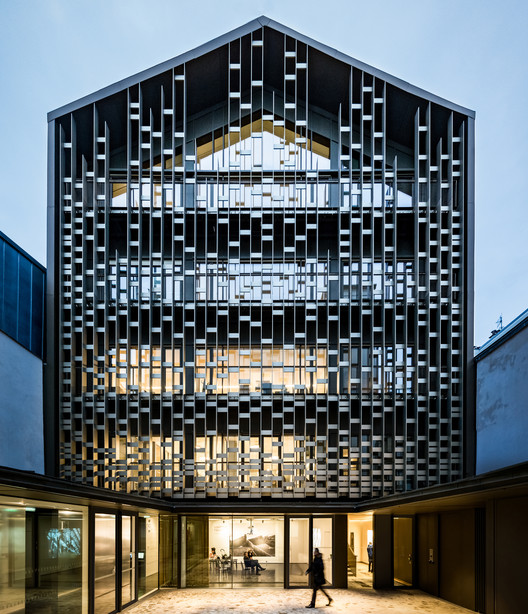 Text description provided by the architects. A place for exhibitions, a workplace, a public place as well as one of preservation, the repurposing of the former automobile garage at 79 Rue des Archives now has a double back end. The challenge was to find the best way to host two distinct owners, to highlight and protect them and to create a contemporary place while ensuring the project played its part in preserving the Marais. This is the considerable feat achieved here by the Lobjoy-Bouvier-Boisseau firm.

The collegial project was undertaken by the two foundations for new premises. Fluid complementary programs result from the reorganized flows and the characteristics of the plot. The site required resolving a number of strategic dilemmas and specific features. The foundations required a showcase, back offices, signage on the street and the intimacy of a courtyard, a layout representing current uses but with the possibility of future reversibility, respect for the historic neighborhood and a restructuring of the site for visitor flows. The architects have succeeded in imbuing the project with the collegial aspect of its dual owners. This is reflected in the permanently present states of openness and staging followed by concealment and protection.

Openness and staging first
The building, historically the site of a vegetable garden, has been further opened by the creation of a second courtyard, made possible thanks to partial demolition of the former garage. The glass curtain walls of the ground floor façades, create perspectives from the Rue des Archives and reveal the exhibition spaces of the Fondation Henri Cartier-Bresson. The ground floor is treated as a continuous feature throughout, serving to stage sequences, moving from the street toward a private space at the back of the plot. A covered walkway opens into the new second courtyard in a cloister effect. A sculptural staircase opens with a double turn into the restricted access building to serve its four upper floors. Broad corridors traverse the offices of the Fondation François Sommer, and broad interior corridors offer the façades views of each other and resemble immense windows onto the city.

Followed by concealment protection
Protection is provided by the openwork mesh screen of the façade, made of solid anodized aluminum and forming a double skin on the main façade. This scenic arrangement is both the project signature and the filter guaranteeing the privacy of its occupants, as well as those in the apartment building opposite. 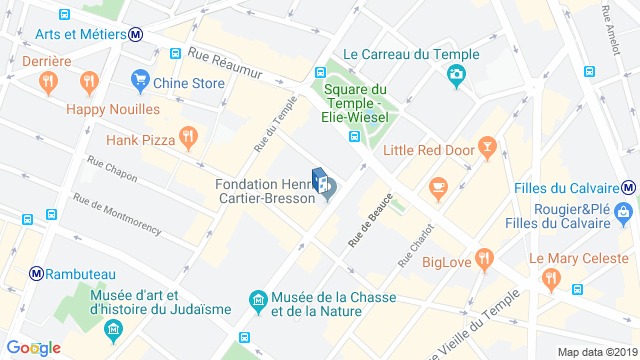