What happens when the sensor-imbued city acquires the ability to see – almost as if it had eyes? Ahead of the 2019 Shenzhen Biennale of Urbanism\Architecture (UABB), titled "Urban Interactions," Archdaily is working with the curators of the "Eyes of the City" section at the Biennial to stimulate a discussion on how new technologies – and Artificial Intelligence in particular – might impact architecture and urban life. Here you can read the “Eyes of the City” curatorial statement by Carlo Ratti, the Politecnico di Torino and SCUT.

Cities, as Goethe had already pointed out, should be understood as continuously developing 'forms in motion' (see Batty 2018). In the past, technological developments and our hopeful, as well as our dystopian imaginations of them, have been one of the main sources of kinetic energy to kick-off the shapeshifting processes of urban transformations. Most of the time with unexpected side-effects, evolving center stage in retrospect.

With the notion of 'eyes of the city' the curators of the 2019 Bi-City Biennale of Urbanism\Architecture and Shenzhen point to a new set of technologies that are rapidly being developed and deployed in urban life. Initially, this metaphor refers to the technologies that actually 'see' urban life: the camera's, sensors and online tracking technologies that measure everything: from air quality and pedestrian density to the movement of cars or the sentiments about certain places expressed on social networks.

But of course, the impact of these new technologies moves far beyond the capacity of the city to see (hear, sense) us. Rather, to keep with bodily metaphors, it is the city’s brain, storing and processing the data assembled, and its capacity to act upon these insights in real-time that matters. The eyes of the city are part of a new 'stack' (Bratton 2016) of technologies, ranging from input sensors, 5G communication technologies, online digital platforms and their interfaces, cloud storage, as well as (blockchain-based) databases and AI, enabling the real time management of resources, transactions, identities and rights in new ways.

None of these isolated parts, nor their conjuncted 'sentient city' (Shepard 2011) assemblages are mere neutral technologies. At the Media Architecture Biennale 2020 we use the lens of Futures Implied to tease out the affordances of new technological systems to shape and reshape both the physical city as well as urban life (www.mab20.org). As we have written, now that the concept of smart cities and the tech-sector have lost their 'innocence', various actors have expressed the need to design urban technologies from a different perspective. Cities such as Amsterdam, Barcelona and New York have called to embrace citizen’s digital rights in the application of technologies to design (Cities for Digital Rights 2019). Designers, researchers and policy makers have argued for the explicit inclusion of public values in the design of digital infrastructures (Van Dijck, Poell & De Waal 2018; De Lange & de Waal 2013). And increasingly, an awareness has been raised about the necessity to include the well-being of the natural ecosystem at large in the design of media architecture (Foth & Caldwell 2018; Clarke, Heitlinger, Light, Forlano, Foth & DiSalvo 2019).

Following these thoughts, the Eyes of the City ought to move us beyond the sole perspective of the City as a Service. In this vision, urban data, digital platforms and mobile media turn the city into a number of individualized consumer services. Ordering a cab, finding a place to work, subscribing to an energy service, it's all turned into a conveniently designed service experience.

We argue for the exploration of other lenses through which the eyes of the city could look at its own flows, movements and actions. The City as a Theatre, for instance, could promote visions of activated urban spaces. Or alternatively, The City as a License (Elsden et al. 2018) could help shift the perspective from consumer services to citizen’s rights and the implications for the natural environment.

This latter vision turns the logic of The City as a Service inside out, focusing on the affordance of blockchain based platforms and their smart contracts to micromanage all kinds of transactions, identities and rights. Through a combination of technologies, citizen or consumer profiles (and even those of non-humans) could be coupled to particular rights or privileges aimed at commercial profit, government policy or community-set goals. For instance, in a commercial scenario, a city with eyes sees all fee parking spots, but only grants the right to use these to premium customers. Other scenarios are possible. Local communities may want to set their own priorities. For instance they could argue for particular streets to be deleted from the GPS-systems of taxis and tour buses at the end of the afternoon when the school day ends - to provide their children a safer passage home. Perhaps such a future city will sense the health of the natural environment, automatically altering the maximum speed on the highway, or further prioritizing the privileges of those on their bikes.

The 'city as a service' then becomes 'the city as a license'. A system of systems setting micro-rights and privileges based on matching what the city sees with sets of externally set goals. Central, fundamental questions then concentrate on the property in the goal-setting of urban technologies. How are various inputs weighted and conflicting ones solved? Who will receive which rights and privileges? How can the rights of non-humans be factored in? Multiple opposing needs are inevitable, for example individual goals versus goals of larger sets of groups; the general interest of institutions versus interests of people; and on a wider timescale, the human perspectives versus environmental or planetary perspectives.

The theme of eyes of the city then, is not so much about the fact that the city can see. More importantly it puts forward the question of what the city makes of what it sees, and who will be in the position to steer these interpretations.

Martijn de Waal is a professor in Play at Civic Media at the Amsterdam University of Applied Sciences. He is the author of the City as Interface. How New Media Are Chaning the City (2014)  and a co-author (with José van Dijck and Thomas Poell) of The Platform Society: Public Values in a Connective World. With Frank Suurenbroek, Michiel de Lange and Nanna Verhoeff he forms the executive committee of the Media Architecture Biennale 2020 that will take place in Amsterdam and Utrecht November 23-27 2020. (www.martijndewaal.nl / www.mab20.org)

Frank Suurenbroek is a professor of Spatial Urban Transformation at the Faculty of Engineering, Amsterdam University of Applied Sciences. He is a co-author (with Ivan Nio and Martijn de Waal) of Responsive Urban Spaces: Exploring the use of interactive technology in the design of public spaces. (2019: www.responsiveurbanspaces.amsterdam). Present research focusses on neuroarchitecture: www.sensingstreetscapes.com; and inclusive neighborhood development. He is part of the executive committee of the MAB20. 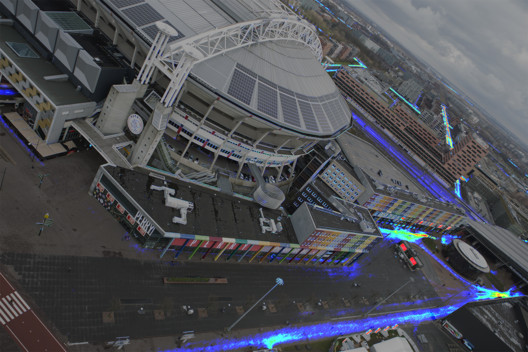