Save
Bookstore in 798 Art Zone / 3andwich Design / He Wei Studio 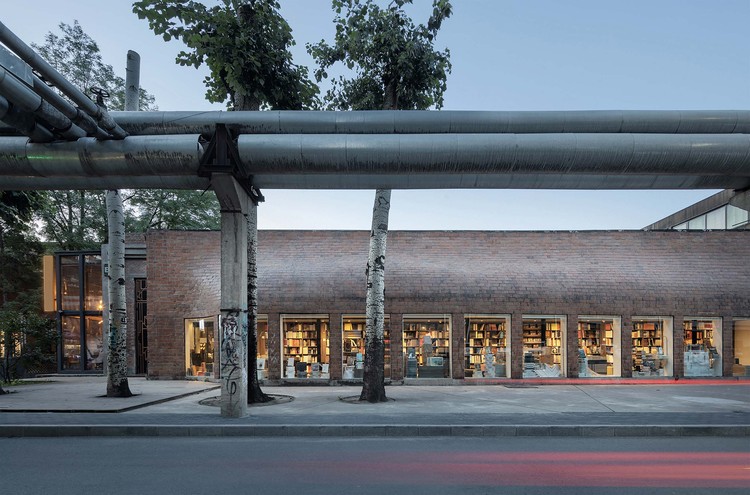 Project background
This is an interior remodeling project. The original building was designed by Liang Jingyu, an architect of renown in 1990s, which served as an adjunctive space to a well-known art institution back then. The floor plan of the architecture presents an asymmetric U-form, of which the south side of the space is long and narrow, the west side wider, and the south facade with French windows of a strong sense of sequence. The west side of the space is relatively upright and foursquare, to which, after repeated rentals and renovations, a second floor and an attached space had been added. The north side is shorter, a two-storeyed part serving as logistics space.

The new function of the building is planned as a new-type entity bookstore, which is not only supposed to fulfill its fundamental function of book sales as a traditional bookstore, but also to meet the needs of customers for relaxation and socializing as a public space. The specific functions include library zone, cafe zone, multi-functional meeting zone, small-sized exhibition zone, VIP service zone, and logistics and office zone.

The complexity of the spaces and function has become difficulty of this project, yet an interesting challenge, as well. Furthermore, the proprietor also makes a request that it should display as many books, which are supposed to be the protagonist of the space, as possible, not too much “online celebrity” styled, with enough aesthetic taste, and reflecting the history of the bookstore.

Spatial planning
The designer agrees with the proprietor’s view of taking books as the kernel of the project. They also share the same understanding that a number of “online celebrity” bookstores nowadays have dissimilated bookstores into some kind of spatial packing of scenes, in which books, book reading and book buying have metamorphosized into a sort of background or stage property for photo shooting and card punching. Admittedly, until today, the space of a bookstore has been developing an increasingly significant function as supporting point of communication, of which, however, the extend control should determine a bookstore’s identity.

For the purpose of maximizing books’ display and facilitating customers’ query and purchase, in the long and narrow space of the south side, a two-storeyed structure of corridor gallery of books are added, of which both floors are fully equipped with bookshelves to guarantee a maximization of books’ display. In the longitudinal corridor space on the 2nd floor of the structures, successive transverse lines intensify the sense of depth of the original architecture, through which the designer hopes to echo the profound and lasting image of the traditional libraries.

The south facade with French windows are well preserved, becoming shop windows for the bookshelves as a scenery, which shows respect to the original architecture, while setting up a connection between the passersby and the interior space of the bookstore. On the west side of 2nd floor, the newly added book gallery corridor joins together with the old platform added by the former owner, merging 1st and 2nd floors’ spaces into a closed loop. On the south side, the staircase on the end of the book gallery corridor is intentionally colored with tripping orange hue, which catches eyes and strengthens the orientational guidance.

The original interior space layout on the west side is, as well, preserved, where the added platform on 2nd floor has also been fully equipped with bookshelves for display. The shelves are attached to the walls while movable low exhibition stands are placed in the middle, for displaying recommended books and derivatives, which, with the stands removed, could be used as small-sized event and meeting space, too. In the northwest corner on 2nd floor, a small void isolated from the main space is devised as a VIP service room for book selection, which is separated from the platform on 2nd floor with glass partition, yet keeping some kind of comfortable communication. The space on the north side is remodeled into an exhibition zone on 1st floor and office zone on 2nd.

The main entrance is located in the southwest corner of the building, linked to a high insightful space into the interior, which becomes the traffic hinge of the whole architecture, concatenating the book gallery corridor to the south, the library zone to the west and the middle area of the exhibition zone. The location and spatial attributes determine that this area will be the core of the whole architectural design. The designer anchors the most active and public area of the building, the cafe and relaxation zone, here. The water bar counter, workbench and cashier desk are set to the east wall, with the linking corridor of the 2nd floor overhanging as its roof. The west side of the original building is a glasshouse with excellent publicity that lets in sunlight and lets out eyesight, where chairs and sofas are put in place to create an open space that lends itself to the relaxing atmosphere, yet still relatively segmented from the reading zone, avoiding interference between the quietness and the movements.

Style and details
The style of the interior design is inspired from the Art Deco aesthetics in the middle 20th century. This traces back to the history of the bookstore: It was founded by an Austrian Jew in Shanghai during his escape from the Nazi’s persecution, which was passed through to New York and Chicago and finally taken over by a Chinese and brought back to Beijing. From the designer’s point of view, this legend should be interpreted with a sort of best fitting form language which has to be the Art Deco style that once enjoyed brilliant and glorious fame both in Shanghai and New York. The geometric and a bit complicated decorative lines, the full-bodied contrast colors and the application of metal materials remind people of the golden era permeated with jazz music, perfectly coinciding with the most flourishing time of the bookstore.

The grillings on the entrance door and along the overhanging corridor over the bar counter reveal most significantly the employ of the Art-Deco-styled decorative language. The simplified and technically realistic decorative lines have become the main visual language of these two parts, through which the designer hopes to give people a retro and mysterious impression on the interior space, which has also advantages for the image-building and the future business operation of the bookstore. Polygonal vintage tiles, fishbone laid wooden floors, metal ceiling lamps in industrial style, exposed lamp bulbs and retro sofas, all these furnishings, as well, consolidate further this decorative language and the spatial aura.

The interior toning is also inspired from the Art Deco style. The designer referred to a great deal of posters of that time and picked out color tones fitting the space. Black, white and walnut color dominate most of the areas as fundamental tonality, with small-sized areas of bright colors, which are intentionally placed on focus locations, elevating the spaces, such as the sapphire bar counter and tiles, Hermes-orange staircases and cargo elevators, malachite green walls and golden skintles.

As for the detail processing, the design underlines the parts that are in touch with human. The columns of the book gallery corridor to the south all have cross-formed fracture surfaces, which echoes the zigzag-lined language of the Art Deco style. And, for the accommodation rails of the book gallery corridor on the 2nd floor, instead of simple horizontal bars, a broad oblique plane is devised, which can be used as supporting holder for customers’ temporary reading or placing their selected books. In a corner in the cafe, to meet the proprietor’s needs, a small cargo elevator is installed, mainly for book transportation. Through discussion, the designer suggested to expose it and choose an elevator in loft style, painted orange and equipped with manually controlled lifting chains, which not only satisfies the functional requirements, but also possesses visuality and participativeness.

In general, this is not a bookstore with typical online celebrity temperament. The core design concept has been serving book reading and purchasing along with its extensive usage functions. A bookstore should be a bookstore in the first line, rather than any places else. However, this doesn’t mean mediocrity. Spatial aura and rhythmical mastering are the key points of this project. The designer hopes the customers, in an involuntary way, can read not merely books here, but also the bookstore and the space itself. 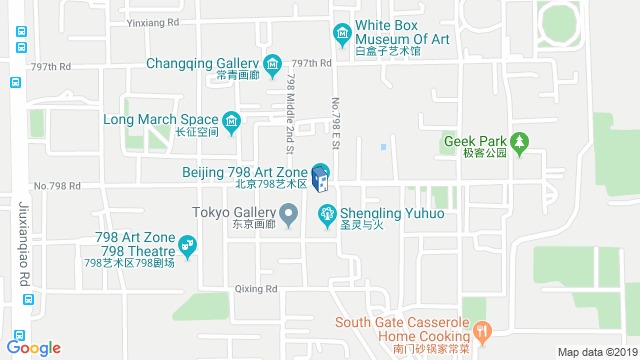 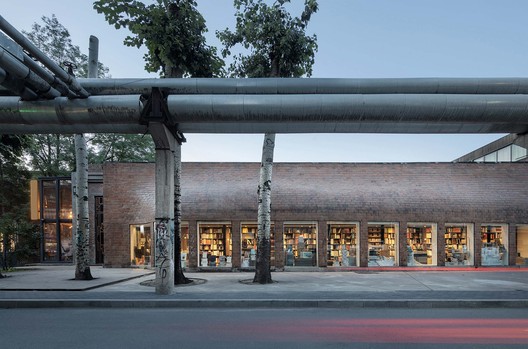