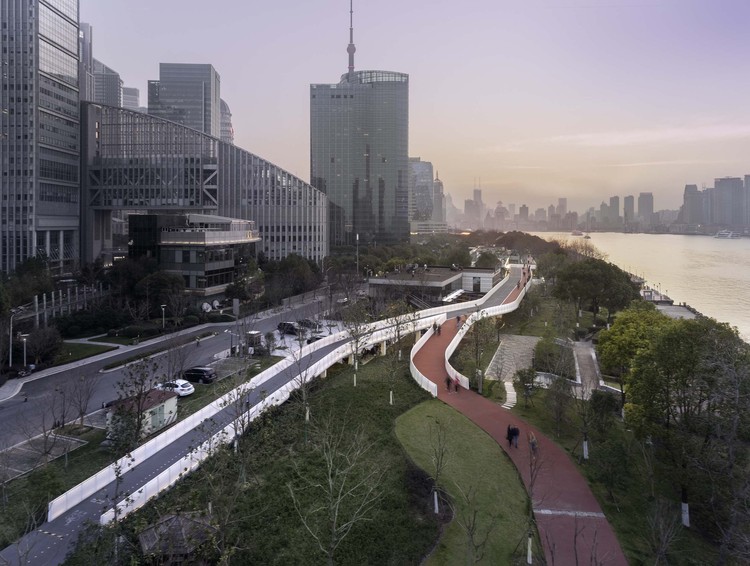 Text description provided by the architects. The connectivity of the waterfront spaces along Shanghai Huangpu River has been launched since 2016. To link the waterfront spaces along the East Bund, Pudong New District planned to build twelve bridges that serve the public not only as low-speed pathways, but also as landmarks in the East Bund landscape.

As one of the twelve bridges, the Pedestrian Bridge over Shanghai Taitong Ferry Station - which is near the city’s landmark of Oriental Pearl Radio & TV Tower - connects the Metropolis Plaza at the eastern side and the Lujiazui CBD Greenland at the western side. The bridge itself is 180-meter long, and is connected to landscape pathways with a total length of 389 meters. According to different heights in the site, the bridge wind around surrounding buildings with two lanes for cycling and jogging/walking. The winding bridge passes through the lush vegetation in the riverside landscape belt, and leads those who are sightseeing or sporting on the bridge to move up and down. Peaking at the platform of the Taitong Ferry Station, or gathering at the courtyard under the bridge, different flows separate and mingle with each other at different points, which makes the bridge a medium for “interweaving flows”.

Connectivity
Before the bridge was built, the Taitong Ferry Station separated the waterfront spaces and disabled the circulations of jogging, walking and cycling. The pedestrian bridge crosses over the station to realize the connectivity of circulations along the bund. The design also takes into consideration the circulation of people going across the bridge and the landscape belt to the riverside: at the eastern segment, an under-bridge plaza is created to guide people to the bund; at the western segment, a courtyard and trails is designed near the T-junction of main roads, offering accesses to the waterfront and places to take a rest.

Interweaving Flows
In the dense grove of the landscape belt, different circulations of jogging, walking and cycling is gathered by two winding lanes. The lanes are 4-meter wide when separated, and 6-meter wide when jointed.

Introducing different circulations from different landscape paths, the bridge crosses through the grove freely in streamlined form, which corresponds to the water splash left by boats in Huangpu River. According to different requirements for slopes of cycling and jogging, the two lanes separate and mingle at different points, providing people with dynamic experience of interaction in the changing scenery of riverside. With the separation and the reunion of the lanes, a courtyard is naturally created for people to stay and rest.

Bridge-courtyard
Multiple scenes and atmospheres are interwoven together in the design. Along the bridge, there is the separation and reunion of walkers, joggers and riders, while above and below the bridge, there are dynamic and serene spaces with the upper part being the active flowing space and the courtyard below being the quite staying space. In the courtyard, the bridge itself becomes the roof of the corridor, and the columns’ foundations become the seats. The trees planted in the center emphasize the idea of traditional courtyard, and offer comfortable shadow to the citizens.

Tectonic
To ensure the 6-meter setback from the flood control wall, one-side cantilever steel structure is used. Two types of columns are utilized at two sides of the Ferry Station. At the eastern side of the station, tapered straight columns are used to offer visual corridor to the bund, whereas at the western side, inclined columns are used to emphasize enclosure of the courtyard.

Aluminum panels are the main material to cover the bridge. Bended and perforated aluminum panels are used to ensure the integrity of the form. The holes on the perforated panels are designed with gradually changing diameters, which strengthens the streamlined form in a subtle way and filters the LED belt inside with a unique pattern.

As night falls, soft light penetrates through the perforated aluminum boards, and the bridge is reflected on the river like two shimmering belts across the grove. The lighting design provides illumination for citizens’ night activities, and helps to promote the all-time dynamism of the larger area. 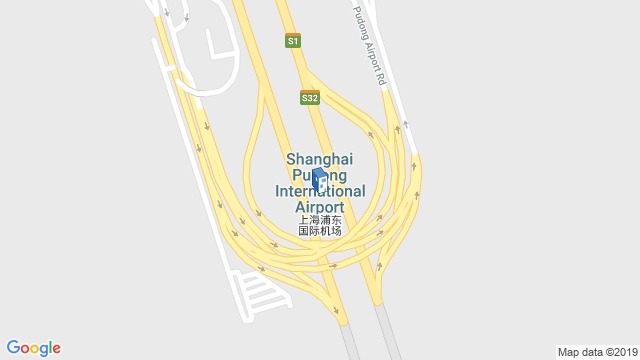 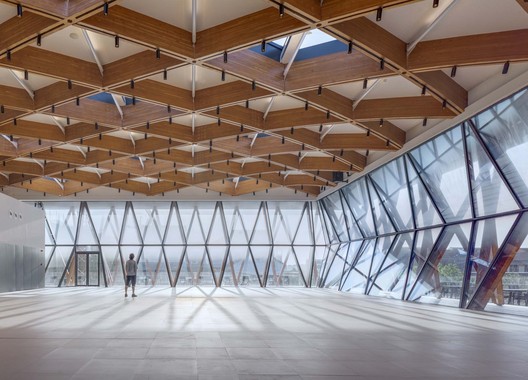 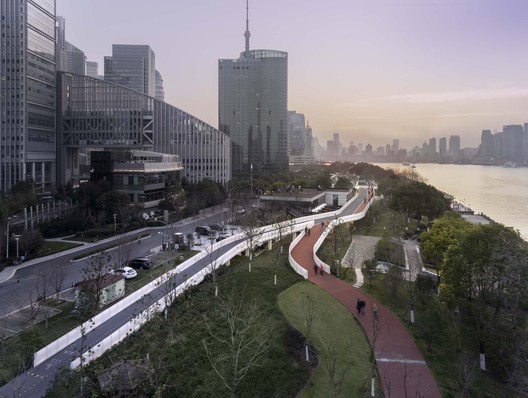