OMA have completed their construction works on their latest addition to the Dutch Skyline. The building composed of stacked three shifted triangular volumes will host the Nhow Amsterdam RAI Hotel, expected to become the largest hotel of the Benelux union once inaugurated. 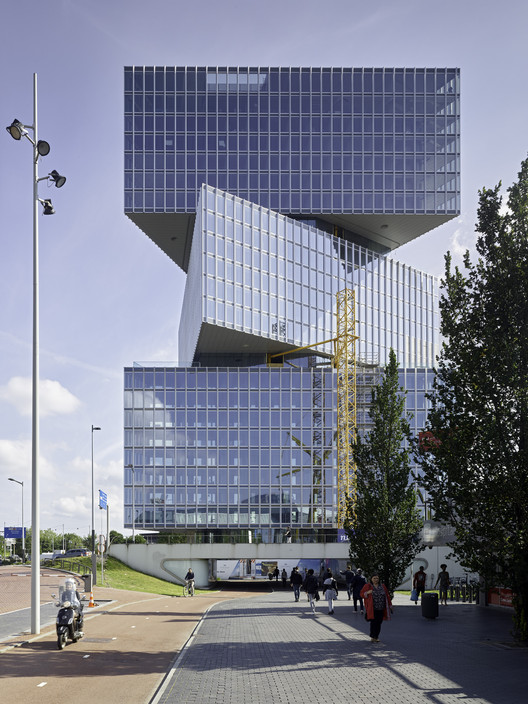 Located in the Zuidas business district, an emerging urban entity in Amsterdam, the Nhow Amsterdam RAI Hotel will be the main hotel for the RAI Amsterdam convention and exhibition center. Along with the 650 rooms in total, the 91-meter building will include a restaurant, a bar, and a live television studio, providing, therefore, places for work and for entertainment.

With a composition that stands out from its context, the stacked tower’s conceptual approach was inspired by “the triangular advertising column on the Europaplein which was once so prominent on the site but now has been overtaken by the many office buildings that have been erected in its vicinity”. Integrating the RAI convention and exhibition center in the city, the project embraces the dense flows of pedestrians, cyclists and automotive traffic that traverse the site.

Regarding the façade of the building, it is made completely from aluminum with a filling of glass panels. The lobby, spread over two-story, holds retail spaces on the ground floor, and a lounge and bar on the first. 19 Floors out of a total of 24, are occupied by the hotel, leaving space to host accessible public and semi-public facilities on the top floors. In fact, this area entitled “On Air”, includes meeting and conference rooms, lounges and a broadcasting studio, from which a daily television show can be recorded.