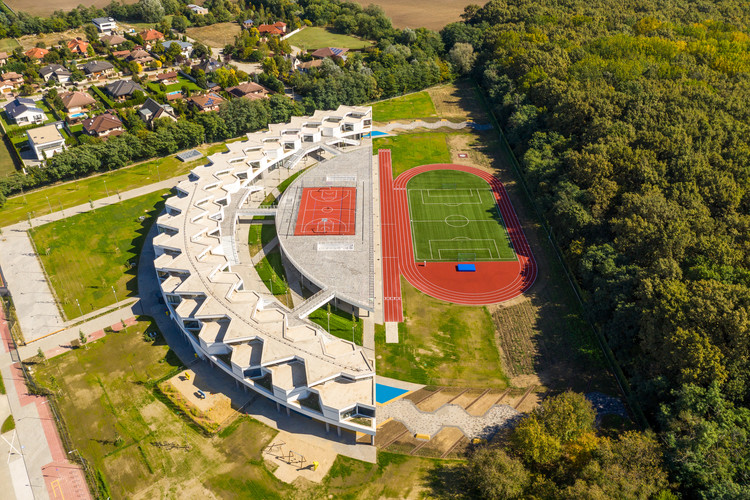 Text description provided by the architects. Our concept for the International School of Debrecen was based on the form of a circle. This simple, yet symbolic shape traditionally means protection, union and community, while it softly blends into the neighbouring forest area of the Natura 2000 protected 'Nagyerdő'.

The site is located near Nagyerdő, the city park of Debrecen (the second largest city of Hungary), in a developing and popular residential area called ‘Pallag’. This calm, natural environment provides an excellent background for a school. However, it was a great challenge to design a contemporary building that fits into its green surroundings, while it represents the qualities of the International School with its characteristic, iconic and unique appearance. The key of the design concept was to create a shape, which goes far beyond its built borders and integrates in the natural environment.

A circle, with its simple shape is the symbol of spontaneously formed human groups without any differentiations. A cluster ofpeople who gather either for a discourse between equals or for paying attention to a single one of them. An area surrounded by a circle melts together groups or individuals. The circle with its primary simplicity symbolizes the union of space and community. It is also a symbol of the borders of existence, or in other words, of our created world.

We considered the woods as an illustration of nature and science – the ultimate symbols of the whole world. In this way, the forest becomes part of the designed object and it is crucial for them to belong to the same circle. Applying the forest as this kind of illustration requires no changes in its inner structure or appearance. The organically changing pathways are from the essence of the forest and they live harmoniously together. Virtually integrating the surrounding natural area, our concept of the ring has been completed by the pathways that lead into the woods.

Throughout the 'gates' that open to the direction of the forest, nature becomes accessible for children and the pathways formed by them recreate their connection to nature time after time.

The building accommodates different-sized groups and communities of about 500 students. They are from three different age groups with rather different needs, whose areas are all placed on the ring, but they are separated from each other. For the youngest children, we created a completely independent world inside the building. There are also two individual entrances: one for kindergarten and elementary school and another one for high school students. The latter one is considered as the main entrance of the complex. A whole area was separated for the sheer usage of kindergarten children and primary school students. Community areas, administration offices, an auditorium and a restaurant are positioned on the ground floor while the second, more quiet and tranquil floor is preserved for learning.

The pavilion-like classrooms are positioned creating longitudinal, dynamically pulsing spaces between them. This structure is continued outdoors, to the direction of the forest, following the circular line and creating garden areas as a transition between the built and natural habitat.

The volume of the building protects the outdoor community spaces and sports facilities. From the level of the classrooms, bridge-like structures lead to the basketball-court. Elevated from the ground, it provides visual connection to the football pitch. Half under the ground, the sports hall is covered by a concrete slab. On the ground floor, students are welcomed by an inner garden that is shaded with trees.

In front of the school, we created a drop off-pick up zone for parents to avoid parking when their kids arrive at or leave the school. Students then enter the protective atmosphere of the school through a short walk in a forest like park that tunes them for school. This green area embraces the school providing a genuine, peaceful environment. 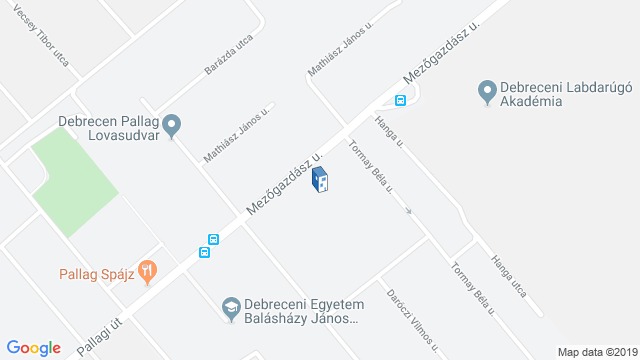 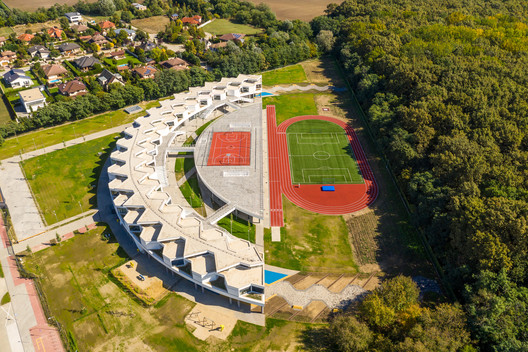